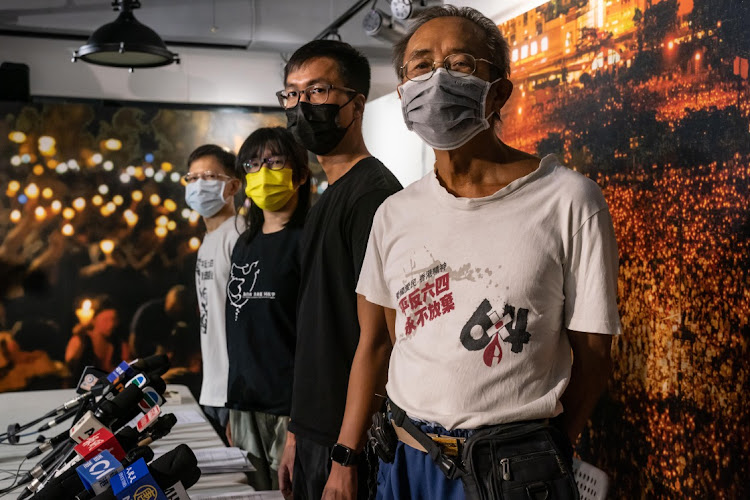 Members of the Hong Kong Alliance in Support of Patriotic Democratic Movements of China attend a press conference in this file photo. Picture: GETTY IMAGES/ANTHONY KWAN

China’s top agency in Hong Kong praised the arrests of four members of a group that had organised an annual Tiananmen Square vigil, as authorities continued a broader push against local pro-democracy activists.

The arrests of four people on accusations of failing to comply with Beijing-drafted security legislation reflected the “fairness and justice of the law,” the Liaison Office said in a statement on Wednesday. Police had earlier arrested four members of the Hong Kong Alliance in Support of Patriotic Democratic Movements of China — Chow Hang-tung, Leung Kam-wai, Tang Ngok-kwan and Chan Dor-wai — local media reported.

The arrests come after Security Secretary Chris Tang vowed “swift and efficient” action against the activist group for its refusal to co-operate with a national security investigation and hand over related documents. Police said in a statement they arrested four people for failing to comply with security law requirements, without identifying  the suspects.

The group had been battling with authorities over efforts to resume a vigil in Hong Kong’s Victoria Park to commemorate the deadly crackdown on democracy activists in Beijing on June 4, 1989. Police have denied permission to hold the event for the past two years, citing antivirus measures — a decision that prompted activists to accuse the government of using the pandemic to stifle civil liberties.

When the police were at Chow’s door, she texted a Bloomberg News reporter that they were “ringing the doorbell like crazy” and “trying the passcode” to her office. Chow, a lawyer, had been expected to appear in court on Wednesday in a bail appeal hearing for Gwyneth Ho, one of 47 pro-democracy activists arrested on subversion charges over their alleged roles in an opposition primary last year.

In recent days, Chow’s group had continued to resist a police request to turn over information about its membership and finances. One member, Tsui Hon-kwong, filed a judicial review on Tuesday, asserting that law enforcement officers were overstepping their power, according to media reports.

The alliance will hold a meeting on September 25 to vote on disbanding, part of a wave of such actions by activist and civil society groups in the wake of the security law. The police actions on Wednesday bring to at least 143 the number of people arrested in national security investigations since the legislation’s enactment in June of last year.

Police said the operation was continuing and they couldn’t rule out further arrests. The Security Bureau, which earlier warned those who failed to provide information could face fines of as much as HK$100,000 and jail sentences as long as six months, expressed support for the arrests.

The Liaison Office had also thrown its weight behind an investigation of the group, saying on Sunday that the alliance was acting illegally and nearing its end.

“Any organisation that is anti-China and disrupting Hong Kong will fall and history will prove it,” it said.

Crackdown on entertainment industry is part of a plan to ensure the younger generation become motivated, patriotic and productive workers
World
11 months ago