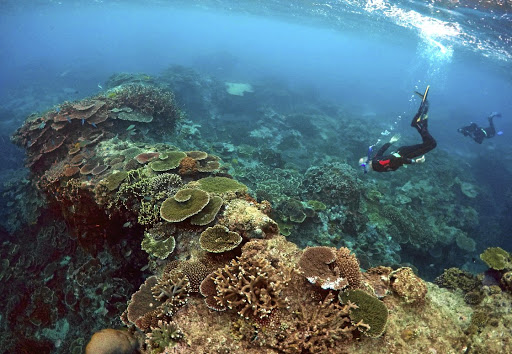 Australia’s government achieved its own peculiar climate goal last week: It managed to prevent the Great Barrier Reef from being listed as “in danger” due to climate change by the Unesco World Heritage Committee.

Unesco has been concerned about the reef’s status since at least 2012, and a draft decision published by the panel in June recommended the danger designation. In the end, however, Australia’s aggressive lobbying of other countries on the committee — including fellow climate laggards Russia, Oman and Saudi Arabia — paid off, at least for now.

The Great Barrier Reef — actually a mass of reefs that stretches 3,000 kilometres along the northeastern Queensland coastline —is important to Australia. Much-cited figures from a 2017 report by consulting firm Deloitte put the reef’s value at A$56bn ($41.4bn), supporting 64,000 jobs and adding A$6.4bn to the economy each year.

The value of being seen as a country of natural beauty rather than a bad actor recklessly destroying a pristine natural wonder won’t be lost on Australia’s leaders. The current prime minister, Scott Morrison, is a former head of Tourism Australia.

And yet a diabolical political landscape has left the country’s climate policy at the mercy of a hard core of diehard fossil fuels supporters. At last count, three prime ministers have been pushed out for attempting to limit the country’s greenhouse gas emissions; one of them twice over. Thermal coal is one of the country’s biggest exports, but so too are tourism and agriculture, which will also suffer as the world warms. Foreigners are always shocked that some of Australia's biggest coal and liquid natural gas ports are on the lagoon of the GBR. Their ships sail right through it to get to market.

Australia’s conservative federal government, led by Morrison, is resisting making material improvements to its shoddy climate pledge. The centre-left government of the state of Queensland, meanwhile, is little better. While it aspires to reach net-zero emissions by 2050 and calls for a federal effort on the same goal, it has also supported the development of new thermal coal mines.

Coral reefs are one of the world’s most visible and sensitive barometers of climate change. Most sections of the GBR were affected by three mass bleaching events since 2015. If the average global temperature rises 1.5º Celsius then 70% to 90% of the world’s coral reefs will suffer, according to the Intergovernmental Panel on Climate Change’s 2018 special report. At 2ºC of warming, “virtually all (> 99 percent) would be lost,” it says.

The ostensible reason for Australia’s opposition to the Unesco listing change is that it would damage tourism. While the Queensland Tourism Industry Council has pushed back on erroneous reports that the entire reef is “dead,” it hasn’t opposed the in-danger listing. “The conclusion that the reef was in danger from climate change was reached years ago by the Australian government,” said the council’s CEO, Daniel Gschwind.

Australia’s frantic lobbying of World Heritage Committee member countries has probably only delayed the inevitable for a short time. The Reef’s status will be examined again at the committee’s mid-2022 session, and by then a new Unesco policy that explicitly allows for climate change to be a cause of an “in danger” listing will have been approved, removing one of the objections raised at last week’s meeting.

The policy will also link mitigation action by countries more closely to their World Heritage Status properties. “One thing [Australia] won’t do, I imagine, is stop exporting coal and methane across the Great Barrier Reef, which would be meaningful,” says Terry Hughes, a professor at James Cook University and one of the world’s leading experts on coral reefs.

A government with insight and a moral compass — or indeed with any regard for the future — might use this as a galvanising moment to pivot away from the powerful fossil fuels lobby. “We should use this as a motivator for Australia to be more focused, and as a rallying call to the rest of the world to save the Barrier Reef,” Gschwind said.

We won’t escape — haven’t escaped — damage to the world from climate change. But if a wealthy country blessed with all kinds of natural resources acknowledges this, it would signify a move away from the polluting industries of the past and towards a more sustainable future.

Australia’s government has played the perception game with cynical brilliance on the international stage. Reality, though, always catches up in the end.

Scientists warn that countries will need to realise that extreme events are here to stay, even if the world can rapidly reduce emissions
World
2 months ago

Environment ministers unable to agree on key climate goals, including phasing out of coal
World
2 months ago
Next Article