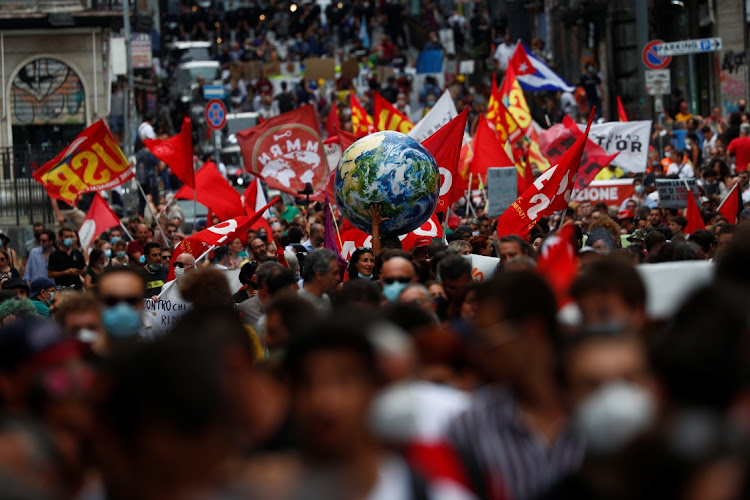 Naples  — Environment and energy ministers from the G20 rich nations made little progress on Thursday on how to reach climate goals, officials said, with a cluster of countries resisting firm commitments.

Near the sumptuous royal palace in Naples where the meeting took place, thousands of flag-waving marchers protested against what they said was a lack of action on global warming.

The G20 meeting discussed biodiversity and the natural environment on Thursday, while energy and climate change will be on Friday’s agenda. Diplomats have struggled for days to find meaningful common ground on both topics.

Italy, which holds the rotating G20 presidency for 2021, said a communique on the environment had finally been agreed to the “great joy” of all 20 countries after “weeks of negotiations and a two-day non-stop session”.

A summary released by his office was short on concrete policy commitments, but nonetheless Cingolani called the result “particularly ambitious” and said it reflected the aims of Italy’s G20 presidency.

“This is the first time these things are clearly written and binding for all the countries that produce 80% of the world’s GDP and 85% of its carbon emissions,” he told reporters.

In his address to the G20, seen by Reuters, Argentinian environment minister Juan Cabandie called for a “debt swap” whereby a portion of the debt of developing countries be forgiven so that they can fund their ecological transition.

Cingolani said he was unaware of the proposal.

The G20 meeting is seen as a key intermediate stage ahead of global climate talks known as COP26 to be held in Glasgow in November.

The urgency of climate action has been brought home this month by deadly floods in Europe, fires in the US and sweltering temperatures in Siberia, but countries remain at odds on how to pay for costly policies to reduce global warming.

Brazil, Saudi Arabia and Indonesia were among countries continuing to resist attempts by the Italian presidency to beef up the language in the G20 statements, officials said.

“It looks like there will be a complete lack of any commitments on money,” said Oscar Soria of the US-based online activist group Avaaz.

“The North is telling the South ‘we need to protect the environment’ and the south is saying ‘we need money for that’, and the Italian presidency isn’t proving very good at getting everyone on the same page,” he said.

Developed countries agreed at the UN in 2009 to together contribute $100bn each year by 2020 in climate finance to poorer countries, many of which are grappling with rising seas, storms and droughts made worse by climate change. However, that target has yet to be met.

“Financing commitments made by developed countries have not been honoured, affecting trust between parties,” said Cabandie.

Barring last-minute progress, it looks unlikely the Naples G20 gathering will make reference to the $100bn or make any other firm financial pledges.

Referring to protests outside, Cingolani said: “There are things I don’t understand. I don't know why there should be scuffles today when 20 nations of the world gather together to commit to seeking solutions.”

Co-operation is the only way to break free from the world’s ‘mutual suicide pact’,  US climate envoy says
World
1 year ago