Potential technological solutions to prevent widespread flooding in cities include permeable asphalt and pavements, along with more green spaces and restoration of wetlands 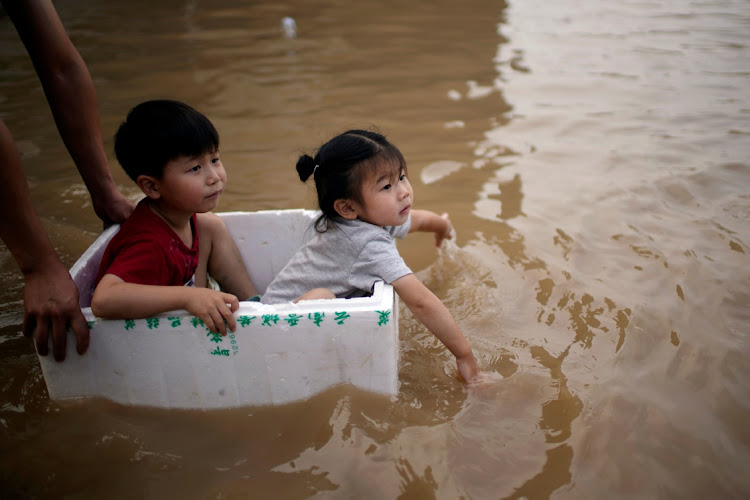 These children took to a styrofoam container on a flooded road after floods in Zhengzhou, the capital of China's Henan province. Picture: REUTERS/ALY SONG

Shanghai — The catastrophic floods that struck the central city of Zhengzhou during the past week have given China’s urban planners a foretaste of future disasters as climate experts say the country must learn to live with record-breaking rainfall.

Official data shows about 98% of China’s 654 major cities are vulnerable to flooding and waterlogging, with rapid growth in recent decades creating urban sprawls that cover floodplains with impermeable concrete.

At least 51 people were killed in Zhengzhou, many of them drowning in a subway system as the deluge on July 20 dumped 800-900mm of rain in what was described by Chinese media as a “once in a thousand-year” event.

“We can't verify whether this is ‘once in a thousand years’,” said Zhou Jinfeng, secretary-general of the China Biodiversity Conservation and Green Development Foundation (CBCGDF), a non-government group. “But because of global climate change, the rainfall statistics will continue to break new records.”

Almost two-thirds of China's 1.4-billion people live in cities compared with a third two decades ago, and coping with future calamities will depend on building infrastructure, most notably flood-prevention and drainage systems, experts say.

Many cities currently on the height and strength of dykes as a first line of defence.

“We know these big events are going to come along, but just don’t know when,” said James Griffiths, a hydrologist at New Zealand’s National Institute of Water and Atmospheric Research.

“City planners need to consider the hydrology of the larger landscape — floodplains and natural basins — when they design new cities, and ensure that the drainage network can continue to use such areas when the big rains arrive.”

China published a policy report in July that lists some of the measures taken to mitigate risks. More than 6,700 reservoirs were reinforced and there were plans for drainage infrastructure at 53 flood-prone sites along the Yangtze, the country’s biggest river.

Located just south of the Yellow river, Zhengzhou is one of hundreds of cities that need to be retrofitted with flood-proof infrastructure.

In Zhengzhou, authorities have relied on the giant South-North Water Diversion Project to try to ease flood pressures in the past several days. They frequently uses giant dams along flood-prone rivers such as the Yangtze and the Yellow to try to regulate water flows and minimise flood peaks.

But China has also been looking for more natural, low-impact solutions to solve its growing flood vulnerability. It started programme in 2015 to create “sponge cities” that could safely retain and drain more rain.

The first phase covered 30 cities across the country, including Hebi, 150km from Zhengzhou.

Among the potential technological solutions were permeable asphalt and pavements, and cities were also encouraged to expand green spaces, build ponds and restore wetlands to take on surplus water.

Faith Chan, associate professor with the School of Geographical Sciences at the University of Nottingham Ningbo, said “sponge city” measures are designed to cope with about 180-200mm of rain in 24 hours, and would have been powerless against the downpour that swamped Zhengzhou.

Zhou of CBCGDF said in a blog post that practical measures such as waterproofing subway systems needed to be backed up by fundamental changes in how cities are designed, noting that the challenges will get harder in the coming years.

“We hope this will serve as an important warning and ring an alarm bell for our industries and government departments to take action quickly, to change quickly, and prevent this kind of disaster from happening again.”