No end in sight to seafarer crisis amid India Covid surge 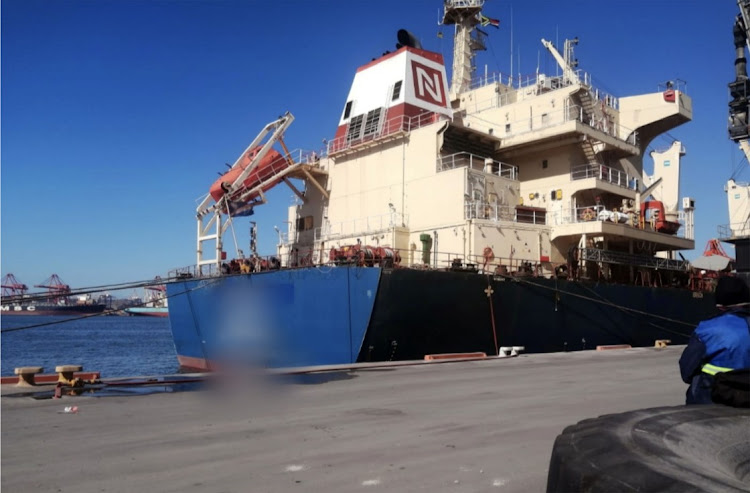 The Indian cargo vessel docked at the Durban harbour has been quarantined after a crew member died and 14 others have been taken for Covid-19 testing. It arrived on Sunday transporting rice. Picture: SUPPLIED

Hundreds of thousands of seafarers risk being stuck at sea beyond the expiry of their contracts because of India’s surging coronavirus outbreak, according to one of the world’s largest independent crude ship owners.

The situation suggests that a maritime labour crisis sparked by the pandemic is continuing into 2021, as a growing number of major ports around the world restrict entry to Indian crew members, which constitute about 15% of the world’s total.

“Those people are restricted from being rotated, and have to stay on board for a much longer time period than their contract is for,” said Hugo de Stoop, CEO of Euronav, in a Bloomberg Television interview on Thursday. “We fear that we’re going to see the scenario that we saw in the first wave and some part of the second wave” of the pandemic.

A number of important stop-over ports including Singapore, Hong Kong and Dubai have closed their borders to Indian seafarers, according to the ICS. Fujairah, a key crew-change destination located in the United Arab Emirates, has also placed restrictions on Indian crew joining ships as well as those signing off from vessels that have previously called at India, according to Singapore-based ship manager Synergy Marine.

Mariners already on-board should not present Covid risks, as they are in de facto quarantine typically lasting more than two weeks, said De Stoop. “Unfortunately, the people who have to replace them have to travel to those countries that the ship will stop at,” he said. “That’s the real problem. That’s what we’re scared about.”

Seafarers typically sign contracts of up to 11 months, which is the maximum length stipulated by the Maritime Labor Convention. However, there have been cases of crew stuck at sea for more than 15 months during the pandemic, said Rajesh Unni, the founder of Synergy. “Such cases will only increase in the next few months.”

The situation has raised concerns over safety, as overworked crews increase the risk of serious maritime accidents. The ICS estimates there are about 1.6-million seafarers serving on the world’s merchant fleet that carries 90% of global trade. There were more than 234,000 Indian seafarers employed in 2019, according to the ministry of ports, shipping and waterways

The state says there is enough oxygen but there are distribution problems, as author Arundhati Roy calls for Narendra Modi’s resignation
World
8 months ago

Infections surge past 21-million in nation, with a death toll of 230,168
World
8 months ago

From Southeast Asia to the Caribbean and South America, countries report surges of Covid-19
World
8 months ago
Next Article