Private hospitals are still in the dark as to whether the government wants to handle all vaccinations, but is prepared to step in at short notice 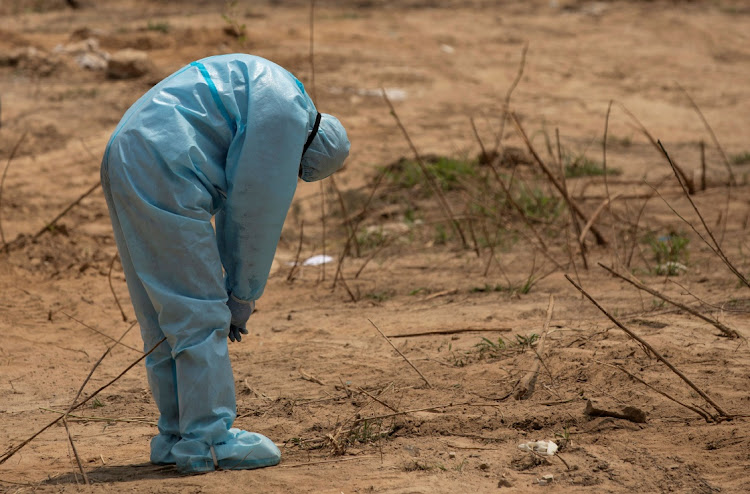 A health worker before the burial of a Central Reserve Police Force officer who died from Covid-19, at a graveyard in New Delhi, India, April 29, 2020. Picture: REUTERS/DANISH SIDDIQUI

London — India’s largest hospital chain says it is ready to administer 1-million coronavirus vaccine doses a day, but the government has not made clear how vaccines will be distributed and whether private healthcare networks will be involved.

Apollo Hospitals Enterprise has so far trained 6,000 staff to give the shots across its network of 71 hospitals, hundreds of clinics and thousands of pharmacies, according to MD Suneeta Reddy, who said the company’s talks with officials in New Delhi have yet to provide any firm guidance.

“We need to know if the government wants to handle the whole thing or allow the private sector to do it,” Reddy said in an interview on Tuesday. “The issue here is how can we double the amount of people that can be vaccinated,” she said from Chennai, adding that Apollo is ready to help in any capacity. The government “can do it, but it will take time”.

How and if India decides to work with its large network of private hospitals on vaccine distribution could be crucial to any success in reining in the world’s second-worst outbreak, which has inflicted deep economic damage. India may start inoculation efforts within weeks as front-running developers apply for emergency authorisation.

There will be a “flood of Covid-19 vaccines” in the next five to six months, Krishna Ella, the chair of Bharat Biotech International — which is producing one of India’s leading indigenous candidates — told a conference on Tuesday.

Apollo has been telling clients via its digital app that a shot “should be available in 60-120 days” and customers will “be the first ones to know about the vaccines”.

Companies vying to roll out those vaccines, along with public health experts, have raised concerns about India’s capacity to swiftly inoculate its population of about 1.3-billion people. There are also fears of unequal access, given the enormous wealth disparities across India’s cities and vast hinterlands.

Apollo Hospitals has held talks with the Serum Institute of India, the world’s largest vaccine maker which has already produced millions of doses of AstraZeneca’s shot. But Reddy said developers are waiting for direction from New Delhi “because all of them have committed capacity to the government first”.

Rajesh Bhushan, secretary to the federal health ministry, told Bloomberg in November that India will rely on its national immunisation network, which currently targets 26.7-million newborns and 29-million pregnant women every year. Experts believe that system will need to be significantly built up with help from private players to meet India’s needs.

Private hospitals in India have been criticised for sitting on the sidelines of the coronavirus crisis. Though the private sector accounts for about 60% of India’s total hospital bed capacity, there were widely reported instances of some private hospitals and doctors refusing to treat Covid-19 patients as cases accelerated in India from June.

Apollo has treated more than 30,000 Covid-19 patients and provided about 400,000 tests, said Suneeta Reddy, one of four daughters of octogenarian founder Prathap C Reddy, who established the company in 1983. India has nearly 10-million cases of the coronavirus, and is adding more than 30,000 infections daily.

The company saw a “lost quarter” earlier this year, Reddy said. This followed the sudden decision by Prime Minister Narendra Modi to impose a draconian national lockdown in March with little notice. While Reddy said she supported the restrictions, Apollo suffered a loss of 2.08-billion rupees ($28m) in the three months to end-June, though it’s seeing a better-than-expected recovery, posting net income of 602.7-million rupees in the latest quarter.

With about 12% of the firm’s revenue derived from international customers, Apollo has received a blow from the near total disappearance of thousands of overseas patients who visit India each year. Until October, India had closed its borders to medical tourism, a market that was expected to be worth $9bn in 2020, according to the Federation of Indian Chambers of Commerce & Industry.

A rise in local demand has compensated for that loss, Reddy said. Many wealthy Indian patients who used to go abroad for treatments are now Apollo’s customers. Occupancy rates across Apollo’s hospitals now runs at about 67%, close to pre-pandemic levels. Roughly 15%-20% of those are Covid-19 patients in specially segregated facilities, she said.

“I’ve always said the international thing was just icing on the cake, definitely not our bread and butter,” Reddy said. “It’s great if it comes, but without it we’ve learnt to meaningfully fill our beds.”

The company will raise up to 15-billion rupees through an equity issue in January, Reddy said. The proceeds will be used to acquire IHH Healthcare’s remaining 50% stake in a Kolkata hospital, reduce Apollo’s debt, as well as fund upgrades of its digital app and any potential bolt-on acquisitions.

Obliged to stay at home or move for their husband’s career before, the shift to work-from-anywhere could change Indian women’s lot forever
World
4 months ago

The IMF predicts India’s GDP will shrink 10.3% in the year to March 2021 as Narendra Modi’s sudden lockdown paralysed activity
World
5 months ago

The genomic twists and turns of an evolving coronavirus