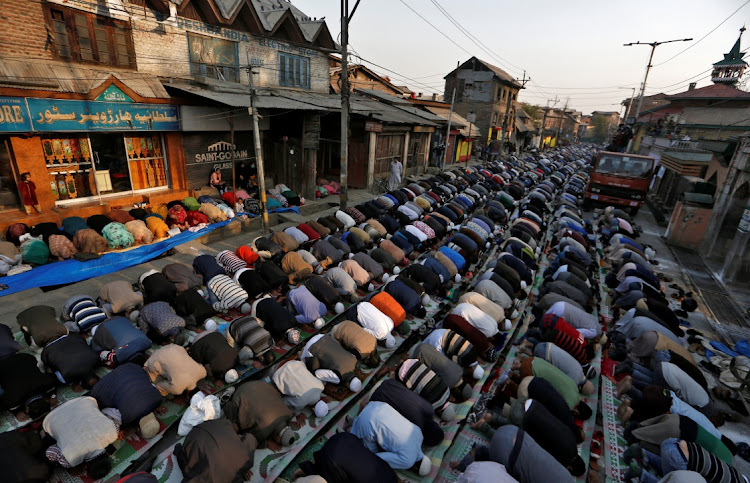 People offer annual congregational prayers called "Khoja Digar" on the 3rd of Rabi-ul-Awwal, the third month of the Islamic calendar, outside the shrine of Sufi Saint Khawaja Naqashband on his death anniversary, amidst the coronavirus disease outbreak in Srinagar October 21 2020. REUTERS/DANISH ISMAIL

New Delhi — India’s government has set aside about 500-billion rupees ($7bn) to vaccinate the world’s second most populous country against the coronavirus, according to people with knowledge of the matter.

Prime Minister Narendra Modi’s administration estimates an all-in cost of $6-$7 per person in the nation of 1.3-billion, the people said, asking not to be identified as the details are private. The money provisioned so far is for the financial year ending March 31 2021 and there will be no shortage of further funds for this purpose, they added.

A finance ministry spokesperson couldn’t immediately be reached when tried on his mobile.

“I doubt that the marginal cost of a vaccine would be anything close to that number at the volumes that India will purchase. There’s one large buyer — India — and one large seller, potentially,” said Ramanan Laxminarayan, director of the Centre for Disease Dynamics, Economics & Policy, which has offices in Washington and New Delhi. “A lot will come down to negotiations, and the government has a lot more power in these situations.”

Adar Poonawalla, head of the Serum Institute of India, the world’s largest manufacturer of vaccines, has predicted the nation would need about 800-billion rupees to procure and inoculate people living everywhere from the Himalayas to the remote Andaman & Nicobar Islands. Apart from buying the treatment, transporting them from manufacturing sites would be a huge undertaking.

Delivering a vaccine across India “will be a gigantic task”, Mahesh Devnani, an associate professor at the Post Graduate Institute of Medical Education and Research in Chandigarh, said on Wednesday on a webinar. “We need a prioritisation plan, everyone cannot have it initially.”

By one estimate, airlifting single-dose regimens to protect the world’s population would require space in about 8,000 cargo planes.

The biggest challenge for India will be building up cold-chain logistics to distribute vaccines across India in a short time, Kiran Mazumdar-Shaw, the founder and chair of Biocon, said at the Bloomberg India Economic Forum last week. “I do hope by the end of November that we are able to say we have a plan” and digital platforms to help roll out vaccines, she said.

While a government-backed panel predicts that India is past the peak of infections and may contain the spread by February, the nation has taken a huge blow to economic growth and Modi has been reopening the economy. Starting this weekend, Indians will be celebrating several festivals, which could lead to a sharp jump in daily virus infections.

Modi on Tuesday said his government will ensure all Indians have access to a Covid-19 vaccine as soon as it is ready.

Halted US trials of two coronavirus vaccines to restart

The fund now forecasts world GDP to shrink 4.4% in 2020, compared with a 5.2% drop seen in June
World
9 months ago
Next Article