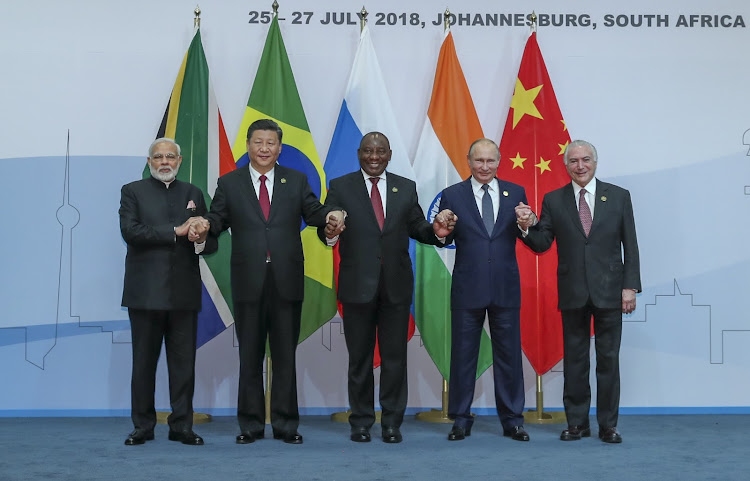 A group photo of the BRICS leaders at the BRICS Johannesburg Summit. Picture: SUPPLIED

This year marks the 20th anniversary of China-South Africa diplomatic ties, and it also marks the centenary of the birth of Nelson Rolihlahla Mandela. As the Chinese proverb goes, “When drinking water, one should never forget those who dug the well.” Twenty years ago, it was President Nelson Mandela who had made the political decision to establish diplomatic relations with the People’s Republic of China on the basis of the one China policy, ushering in bright future for China-South Africa relations. Since then, our relations have achieved a leapfrog development from a partnership to a strategic partnership and then to a comprehensive strategic partnership, setting up a model for China-Africa Cooperation and South-South Cooperation. Such visionary figures as Madiba proved their extraordinary political responsibility and strategic vision, and made the right choice. Their historical contribution to both China-South Africa and China-Africa relations shall be remembered forever.

In the past 20 years, the special and friendly relationship between China and South Africa has grown from strength to strength despite the passage of time. The Chinese people firmly supported South African people’s fight against apartheid, and forged a deep friendship in their just pursuit of equality, freedom and liberation. After the establishment of diplomatic relations, China and South Africa have supported and learned from each other in their respective exploration of a development path suited to national conditions. Both China and South Africa have been advancing the bilateral relationship from a strategic and long-term perspective, and regarding each other as the strategic pivot and priority in their respective foreign policies. China-South Africa relations keep moving forward as guided by ever closer high-level exchanges.

Last July, HE President Xi Jinping paid his third state visit to South Africa successfully, and South Africa is the only country receiving three state visits by President Xi. Just over one month later, HE President Cyril Ramaphosa paid a successful reciprocal state visit to China. Such a close interaction fully reflects the high level political and strategic mutual trust between the two heads of state. Indeed, the momentum and trajectory of the development of China-South Africa relations will not be altered by leadership succession or the changing of time. 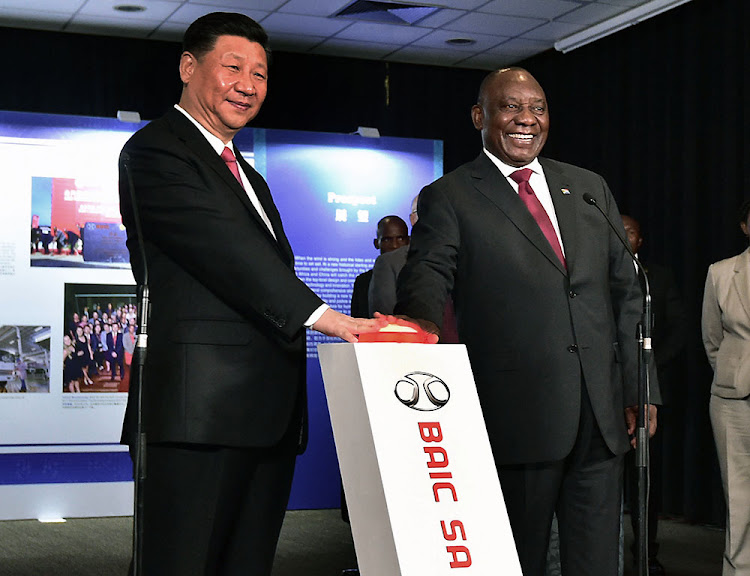 On July 24 2018, Chinese President Xi Jinping and South African President Cyril Ramaphosa attended the launch ceremony of the first SUV rolling off the production line at the BAIC Factory, through a video link. Picture: SUPPLIED

In the past 20 years, China-South Africa mutual beneficial cooperation has delivered fruitful outcomes. China has been South Africa’s largest trading partner for nine years in a row, and South Africa has become China’s largest trading partner in Africa for eight consecutive years. Two-way trade totalled $39.17-billion in 2017, more than 20 times the figure at the start of our diplomatic engagement. Preliminary statistics show that China’s direct investment in South Africa exceeded $25-billion in cumulative terms, creating hundreds of thousands of jobs for local communities. Compared with other African countries, South Africa’s investment in China exceeded $700-million, topping the ranking in terms of both quantity and quality. When President Xi visited South Africa last July, both sides reached several cooperation agreements worth of $14.7-billion. When President Ramaphosa visited China this September, the two sides again signed cooperation deals, with one agreement alone worth over R14-billion. Our cooperation helps inject strong impetus into South Africa’s efforts for economic development and job creation.

In the past 20 years, the exchanges between our two peoples have become increasingly frequent and close. In 2017, China and South Africa launched the High-Level People-to-People Exchange Mechanism, the first of its kind between China and Africa. South Africa has attracted more Chinese tourists, established sister relations with more Chinese provinces and cities, and opened more Confucius Institutes and classrooms than any other Sub-Saharan country. China has become an increasingly popular destination for South African students. More than 2600 South African students are studying in China in 2017 with an year-on-year growth of 11.5%. These exchanges have brought our two peoples even closer with greater mutual understanding and friendship.

In the past 20 years, China and South Africa have strengthened cooperation and coordination on the global stage. As two major developing countries and emerging market economies, China and South Africa hold similar views on development, security and international order and share a broad consensus on major international affairs and hotspot issues. The two countries have closely coordinated and co-operated with each other in such international organisations and multilateral mechanisms as the UN and G20. The two countries worked closely with each other and successfully hosted the 10th BRICS Summit at Johannesburg and the FOCAC Beijing Summit, sketching out a new blueprint for BRICS and China-Africa cooperation in the new era. 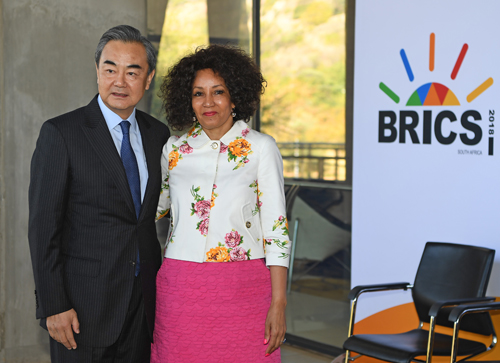 Since China and South Africa started their co-chairship of the FOCAC in 2012, the two countries have spared no efforts to promote the development of the FOCAC mechanism and China-Africa solidarity and cooperation. In 2015, the FOCAC Johannesburg Summit embarked on a new path of win-win cooperation for common development between China and Africa. At the summit, President Xi announced ten major cooperation plans with a fund of $60-billion aimed at addressing the three bottlenecks hindering Africa's development. Up till now, all the above-mentioned measures and fund have been delivered or arranged. At the Beijing Summit, President Xi launched eight major initiatives in close collaboration with African countries and announced another $60-billion of financing to Africa, which was warmly welcomed by all FOCAC members. China will join hands with South Africa to achieve the common goal of building a closer China-Africa community with a shared future.

Thanks to the joint efforts of China and South Africa, BRICS has grown from an economic concept into a significant international cooperation mechanism. With a stronger foundation and momentum for cooperation and development, BRICS has become a leading force in driving world economic development, improving global economic governance and promoting democracy in international relations. In 2017, the first Africa Regional Centre of the BRICS New Development Bank (NDB) was launched in Johannesburg, South Africa. The success of the BRICS Johannesburg Summit marks an important step forward towards the next Golden Decade of BRICS cooperation.

Going forward, both countries need to maintain high-level exchanges, strengthen inter-party cooperation and governance experience sharing, continue to provide each other with mutual understanding and support on issues bearing on our respective core interests and major concerns, and keep communication and coordination over major international and regional issues. Both Countries need to deepen cooperation in key areas such as industries, production capacity, resources and energy, infrastructure, finance, tourism, and the digital economy, and deliver more benefits to our peoples. China stands ready to share its development opportunities. We welcome South Africa, the only guest country of honour from Africa, to send a high-level delegation to participate in the First China International Import Expo to be held in Shanghai in the coming November. China will fully support and actively participate in the upcoming Investment Conference and Jobs Summit hosted by the South African government. China is committed to joining hands with South Africa to implement the important outcomes and consensus of the FOCAC Beijing Summit and BRICS Johannesburg Summit, advance the fundamental common interests of African and other developing countries, so as to make the international order more just and equitable, and build a new type of international relations and a community with a shared future for mankind.

As President Xi emphasised at the FOCAC Beijing Summit, Africa has a huge potential, this great continent is full of hope, and China-Africa friendship and cooperation have broad vistas. The African countries are like a pride of running lions, and South Africa is taking the lead. China-South Africa relations are now standing at a new historic starting point to lead China-Africa relations into a brighter future.

China is willing to be the most reliable friend and the strongest partner of South Africa for its national development and scale new heights in promoting China-South Africa comprehensive strategic cooperation to realise win-win cooperation for common development.