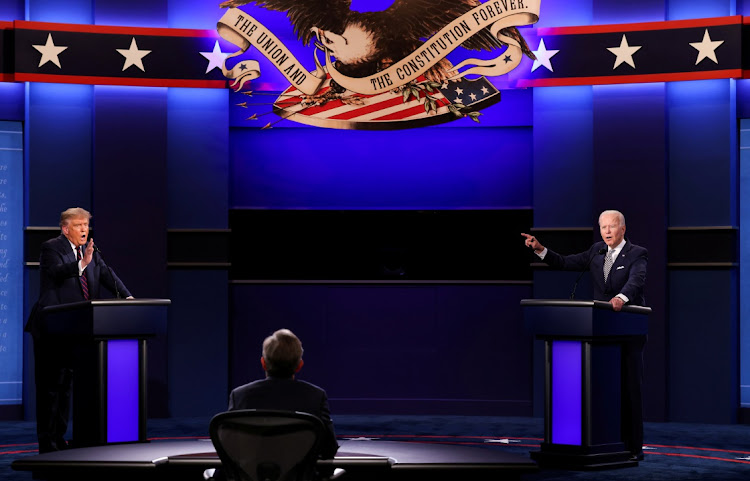 Washington — US President Donald Trump and former vice-president Joe Biden hurled insults and repeatedly interrupted each other in their first debate, sparring over topics ranging from health care to the economy and their families as moderator Chris Wallace tried mostly in vain to control the conversation.

Biden repeatedly called Trump a “clown” and told him to “shut up” as Trump talked over his answers. He called the president a “racist” after Trump defended his orders to end racial sensitivity training in the government.

Trump says he has right to Supreme Court pick

The back-and-forth quickly degenerated after Trump answered the first question, about his nominee to replace the late Supreme Court Justice Ruth Bader Ginsburg. Trump said he had the right to move swiftly to replace her, while Biden said US voters should weigh in first.

“We won the election,” Trump said in answer to the first question, about his nominee Amy Coney Barrett. “Elections have consequences. We have the Senate, we have the White House and we have a phenomenal nominee.”

Biden said that Trump and Barrett want to strike down the Affordable Care Act, costing 20-million people their health insurance.

Wallace tried to intervene as the two candidates squabbled over their respective health policies, and Trump complained: “I guess I’m debating you.”

“Folks, do you have any idea what this clown is trying to do?” Biden, who frequently spoke directly to the camera, said as Trump talked over him. “Will you shut up, man,” he grumbled moments later.

US president Donald Trump and former vice president Joe Biden got heated in their first chance to challenge each other face to face during the first presidential debate.

Wallace subsequently asked about Trump’s response to the coronavirus pandemic, which has killed more than 200,000 Americans so far, and why voters should trust Biden to handle the response better.

“You don’t panic. He panicked,” Biden said. “He still doesn’t have a plan.”

“You could never have done the job that we did. You don’t have it in your blood,” he told Biden, alleging “millions” of Americans would have died with the former vice-president leading the country.

After enduring Biden’s criticism of his coronavirus response, Trump seized on a Biden remark that his management of the crisis would be “smart”.

“Don’t ever use the word ‘smart’ with me,” Trump said, reminding Biden that he once said he went to Delaware state University when he went to University of Delaware.

Biden chuckled. “Oh, give me a break.”

“There’s nothing smart about you, Joe,” Trump added.

Trump and Biden even argued about whether Americans should wear masks to combat spread of the virus. Many people in Trump’s entourage in the audience didn’t wear one, and when an official from the Cleveland Clinic, which is co-hosting the debate, came by to offer them masks, they refused.

Biden’s entourage wore masks. He noted that the director of the Centers for Disease Control and Prevention said earlier in September that near-universal mask wearing would end the US outbreak. Trump said other officials had said the “opposite”.

“No serious person said the opposite,” Biden said.

“I think masks are OK,” Trump said. “I mean I have a mask right here. When needed, I wear masks. I don’t wear masks like him.”

Hours before the debate began, Biden released his most recent tax returns, signalling that he wanted new revelations about the president’s taxes at centre stage for their first face-to-face encounter.

“Is it true that you paid $750 in federal income taxes” in 2016 and 2017, Wallace asked Trump, a reference to New York Times reporting beginning Sunday on tax records the president has kept secret.

“Millions of dollars,” Trump answered. “And you’ll get to see it.”

The difference between the two candidates’ tax history is fodder for Biden’s argument that Trump has conned working-class voters into supporting him.

After the discussion of Trump’s taxes, a question about Trump’s economic record degenerated into arguing — again in personal and insulting terms — over China and the two candidates’ families.

“You take a look at what he’s actually done. He’s done very little,” Biden said. “China’s perfected the art of the steal.”

Trump used the criticism as an opening to attack Biden’s son Hunter, demanding to know whether he had taken “billions of dollars” from China and alleging “the mayor of Moscow’s wife gave your son $3.5m.”

Biden audibly sighed. “That is not true,” he said. “It’s totally discredited.”

Trump began talking over him again, insisting the say was only discredited by the media.

“It’s hard to get any word in with this clown,” Biden said. “His family, we could talk about all night.”

Trump said some of his family had given up comfortable lives to move to Washington and help him govern. Wallace ended the back-and-forth by admonishing the two men not to interrupt each other, focusing on Trump, who he said had been the worst about it.

After Wallace asked Trump to explain actions he has taken to end racial sensitivity training in the government and by federal contractors, Trump said that “I ended it because it’s racist” and “they were teaching people to hate our country, and I’m not going to allow that to happen.”

Wallace asked Trump if he would condemn white supremacists and militia groups.

Then do it, Wallace said to him.

Biden said he should condemn the Proud Boys, a group of Trump supporters who have engaged in protests and street violence with left-wing demonstrators.

Biden noted that law enforcement officials in Trump’s administration have named white supremacists one of the nation’s gravest domestic threats. “Antifa’s an idea, not an organisation,” he said.

“You’ve got to be kidding,” Trump replied.

Later, Biden returned to the discussion to his family, noting the military service of his late son Beau Biden and accusing Trump of calling service members “losers”, a reference to an Atlantic report earlier in September about the president disparaging people in the military.

Trump has denied the report.

“He was not a loser,” Biden said. “He was a patriot and the people left behind there were heroes.”

“Are you talking about Hunter?” Trump said. “I don’t know Beau. I know Hunter,” who he said “got thrown out of the military, he was thrown out, he was dishonourably discharged”.

“For cocaine use,” Trump said. “And he didn’t have a job until you became vice-president.”

“None of that is true,” Biden said, adding that “my son, like a lot of people you know at home, had a drug problem. He’s overtaken it. He’s fixed it. He’s worked on it. And I’m proud of him, I’m proud of my son.”

Hunter was discharged from the military because of drug use.

Later, after an exchange about the environment and the economy, Trump alleged that Biden had called people in the military “stupid bastards” on tape, raising his voice as Wallace pleaded for him to “stop”.

“Play it,” Biden said of the alleged recording.

Tuesday’s presidential debate, the first of three before the November 3 election, was hosted by Case Western Reserve University as well as the Cleveland Clinic.

With five weeks left until election day, polls show Biden leading Trump nationally and in key swing states. The Democrats’ campaign has approached the debate as a high-stakes moment when he could cement his advantage or see it begin to erode.

For Trump, the debate was a critical opportunity to try to regain momentum after months of declining poll numbers.

Trump's campaign spokesperson accuses Biden of hiding past earnings, but does not address whether Trump will release his tax returns
World
6 months ago