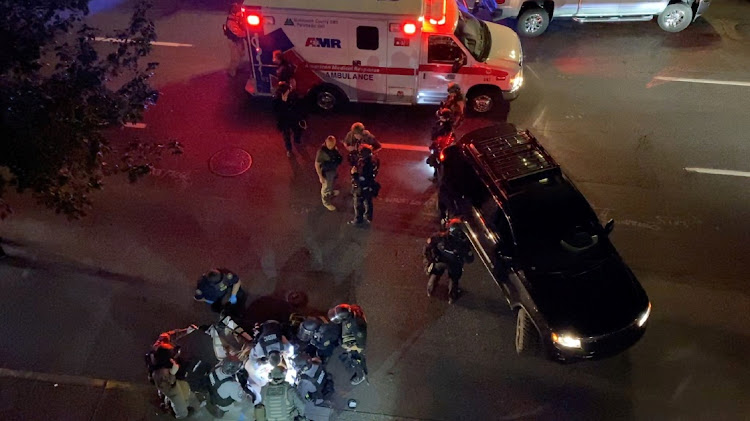 Medics and police personnel surround the victim of a shooting in Portland, Oregon, the US, August 29 2020. Picture: SERGIO OLMOS/SOCIAL MEDIA/REUTERS

A widely shared video appears to show the incident from a distance, in which two shots are fired in a small crowd. An AP freelance photographer said he saw medics working on the body of the victim, who appeared to be a white man.

The victim was wearing a hat with the logo of Patriot Prayer, a right-wing group, AP said. A caravan of 600 vehicles transporting Trump supporters left the area at about 8.30pm, and gunshots were heard 15 minutes later, AP added, citing the police.

While the identity of the victim has not been publicly released, both sides of the political divide were quick to blame each other for encouraging the violence that led to the killing.

Trump unleashed a tweetstorm on Sunday accusing Democratic leaders of cities and states of not controlling protests and saying the National Guard has and would do so. Chad Wolf, the president’s nominee to head the department of homeland security, said “all options are on the table” in terms of again sending troops even if local officials do not request them.

“The way you stop the rioting is surge manpower and resources, citizen soldiers, National Guard, and you overwhelm the number of protesters,” Republican senator and homeland security committee chair Ron Johnson said in an interview with CNN on Sunday.

The campaign for Joe Biden, the Democratic presidential nominee, said he would travel the country this week to address the recent violence.

The clash in Portland, the site of the nation’s most enduring recent protests, came amid a tumultuous week as demonstrators gathered again on Saturday in Kenosha, Wisconsin, over the police shooting of a black man.

The Kenosha protests started after a police officer in the southeastern Wisconsin city shot Jacob Blake seven times in the back last Sunday. Two nights later, two protesters were killed and a third was injured in a subsequent shooting. A hearing to extradite the 17-year-old suspect in that case, Kyle Rittenhouse, from his home state of Illinois was delayed for 30 days.

Saturday’s demonstration in Kenosha was attended by public officials, including deputy governor Mandela Barnes, and by other members of Blake’s family. Other protests and counterprotests were scheduled about the US, ahead of the November election.

Trump took aim at people protesting against racism and police brutality on Friday, saying they are “just looking for trouble”. He will visit Kenosha on Tuesday, the White House announced on Saturday night. On Sunday, Lara Trump, a campaign adviser, said the president may meet Blake’s family.

Karen Bass, chair of the Congressional Black Caucus, said on CNN that Trump’s visit to Kenosha will “agitate things and make them worse” as local law authorities have blamed the violence on people who have missed curfew.

Speaking in Texas, Trump was asked by a reporter about Rittenhouse and the contention that he acted in self-defence.

“That’s under investigation right now and they’ll be reporting back to me over the next 24 hours, 48 hours maybe, max, and we’ll have a comment about it,” he said. “Right now we’re looking at it very, very carefully.”

With Trump running an explicitly law-and-order re-election campaign, Biden told the National Guard Association on Saturday he would never put them “in the middle of politics or personal vendettas”.

“I’ll never use the military as a prop or as a private militia to violate rights of fellow citizens,” the former vice-president said in a virtual talk from his home in Delaware, according the Washington Post. “That’s not law and order. You don’t deserve that.”

Meanwhile, legislators in California are setting up a task force to study and propose recommendations for reparations to African Americans, particularly the descendants of slaves, AP reported. The state Senate supported creating the nine-member commission on a bipartisan 33-3 vote Saturday.

In Minneapolis, where the killing of George Floyd sparked the Black Lives Matter protests earlier in 2020, former police officer Derek Chauvin asked a judge to dismiss murder charges against him for Floyd’s death, CNN reported. His lawyer said there’s not probable cause to support charges of second-degree murder, third-degree murder and second-degree manslaughter, CNN said, while prosecutors sought stricter sentences than recommended by state guidelines.

In Raleigh, North Carolina, a peaceful march through the city’s centre on Friday night ended with scattered vandalism where 14 were arrested after the 10pm curfew, the News & Observer reported. On Saturday night, hundreds protested in central Durham and marched on the city's police headquarters, the paper said.

“You know when you watch sports, you want to relax, but this is a whole different world,” Trump told reporters aboard Air Force One on Friday night after the campaign rally. “It’s terrible. I think what they’re doing to the NBA in particular is going to destroy basketball.”

More protests are expected this week. University of Alabama football players and coaches are planning a march at 4pm on  Monday to protest against social injustice, running back Najee Harris said in a tweet.

Melania Trump a lone voice of empathy at Republican convention

US president secures Republican nomination, attacks voting by mail and casts states' Covid-19 lockdowns as attempts to influence voting in November
World
11 months ago
Next Article