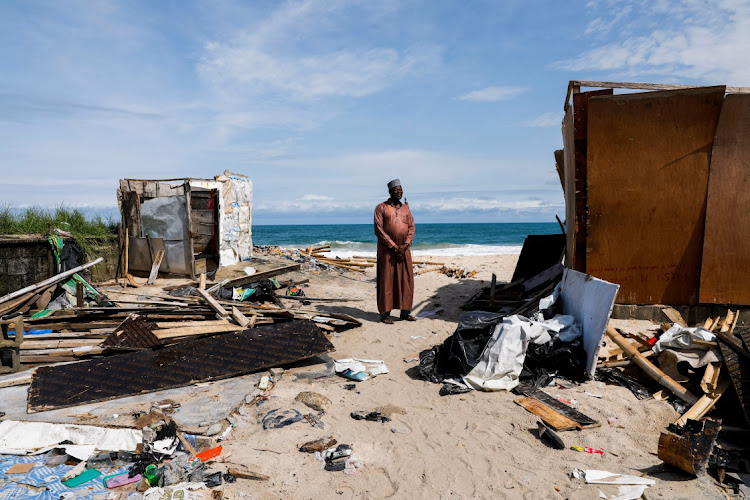 Mureni Alakija, 68, a Nigerian businessman displaced by an ocean surge, stands on the shore of the Alpha beach, amidst the rubble, where his home was previously located, in Lagos, Nigeria on June 21 2022. Picture: REUTERS/Temilade Adelaja

Lagos — When an ocean surge washed away Mureni Sanni Alakija’s house in 2011, he took a loan to build a home farther away. But that too is no longer safe as the sea creeps inland in Okun Alfa, a neighbourhood in Nigeria’s commercial capital, Lagos.

Hundreds of other residents have watched helplessly as tidal waves devour their homes, which experts say is a product of rising sea levels linked to climate change.

Government leaders are meeting at the Commonwealth of Nations summit in Rwanda this week to discuss the plight of residents and other issues. Africa has contributed very little to climate-warming greenhouse gas emissions, but its residents are among the most vulnerable to the fallout from the planet’s warming, a UN climate panel said in February.

Africa’s most populous nation, stretching from the southern fringe of the Sahara to the Gulf of Guinea, is at risk of a triple attack from climate change as the desert encroaches on its northern pastures, rainfall erodes farmland in its eastern Niger Delta, and the Atlantic Ocean floods its southern coast.

Lagos, which is spread over creeks and lagoons and dangerously close to sea level, as well as the states of Bayelsa and Delta face the highest risk of flooding, threatening more than 20-million people, the Nigeria Hydrological Services Agency says.

Though Mureni moved his wife and children to a safer location in Lagos a decade ago, he is not ready to leave his ancestral home. But the ocean keeps taking more land, and he says it may be a matter of time before he loses this home too.

At the last Commonwealth heads of government meeting in 2018, leaders agreed to an action plan to protect oceans from the threats of climate change, among other challenges.

Jeff Ardron, an adviser on ocean governance at the Commonwealth secretariat, said the summit would check on progress since 2018, while a new fund to help communities like Okun Alfa cope with climate change would be announced.

“These communities, they can expect help around building nature-based solutions that will protect them from the ocean. Tackling the ocean and climate change at the Commonwealth meeting is a priority,” he told Reuters in Kigali.

Some houses in Okun Alfa are barely standing from constant pounding by tidal waves. The sea has entirely consumed others.

Aliba Mohammed, a resident, lost his house and moved to what he thought was a safe distance from the ocean, but water has followed him to his doorstep.

Developing nations say scant progress was made at the mid-year session on key issues, in particular on setting up a finance facility to deal with ...
Business
1 week ago

Climate-vulnerable nations have long grappled with the slow pace of progress at UN negotiations, with their key demands — including more finance — ...
World
1 week ago
Next Article

PHILLIP PETTERSEN: Jacking up disaster risk control by building back on higher ...

Forests act like an air-conditioner for our warming planet

PETER FABRICIUS: Will climate change make Africa a continent of arid and moist ...

PHILLIP PETTERSEN: Jacking up disaster risk control by building back on higher ...

Forests act like an air-conditioner for our warming planet

PETER FABRICIUS: Will climate change make Africa a continent of arid and moist ...