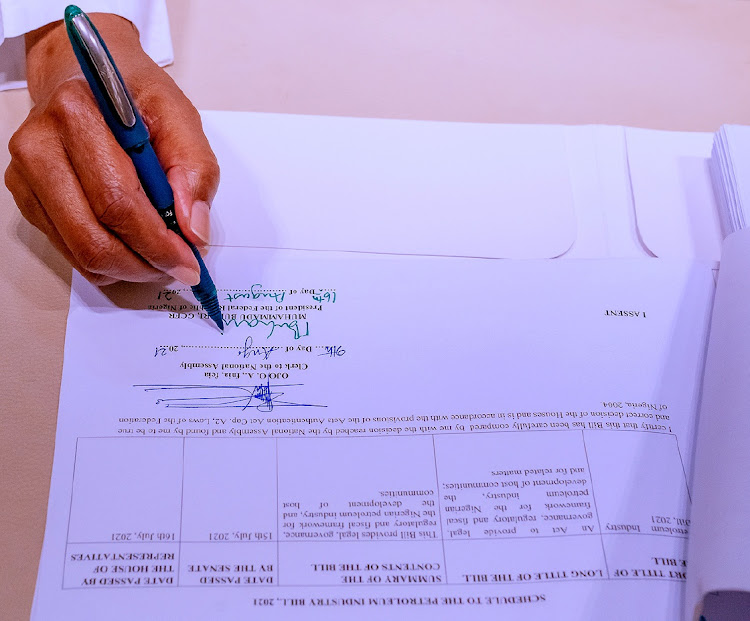 Buhari assented to the so-called Petroleum Industry Bill on Monday, a month after it was voted through by both chambers of the National Assembly, presidential spokesperson Femi Adesina said in an e-mailed statement. Buhari’s government is banking that the reforms will attract a greater share of global capital allocated to fossil fuel projects.

The bill was first presented to parliament in 2008 and is aimed at removing legal and regulatory uncertainty that’s held back the industry’s growth. While oil contributes less than 10% to Nigeria’s GDP, it accounts for nearly all foreign-exchange earnings and half of government revenue. The economic-growth cycle is closely linked to crude output.

Wrangling between politicians and complaints by oil companies scuppered previous efforts to update the regulations, a process that began almost two decades ago.

Firms active in Nigeria, which include Royal Dutch Shell and Chevron, secured some concessions after objecting to parts of the bill that was sent to parliament in September. Legislators lowered the levels of taxes and royalties originally proposed and decided that a “hydrocarbons tax” should not apply to deep offshore production.

The law “will offer materially lower royalties and taxes for oil,” energy consultant Wood Mackenzie said on August 12. The government also hopes the legislation will incentivise investors to support its ambition to significantly increase Nigeria’s natural gas output and consumption.

The law has left certain groups unhappy. Legislators from the oil-producing regions in southern Nigeria unsuccessfully lobbied for producers to allocate more money to funds set up to develop the communities hosting their operations.

Fuel wholesalers and retailers fear a clause could hand Aliko Dangote, Africa’s richest man, a dominant position over the sale of petroleum products in Nigeria.

SA and the continent must further boost the maritime sector, which is a rich source of growth and skills
Opinion
10 months ago