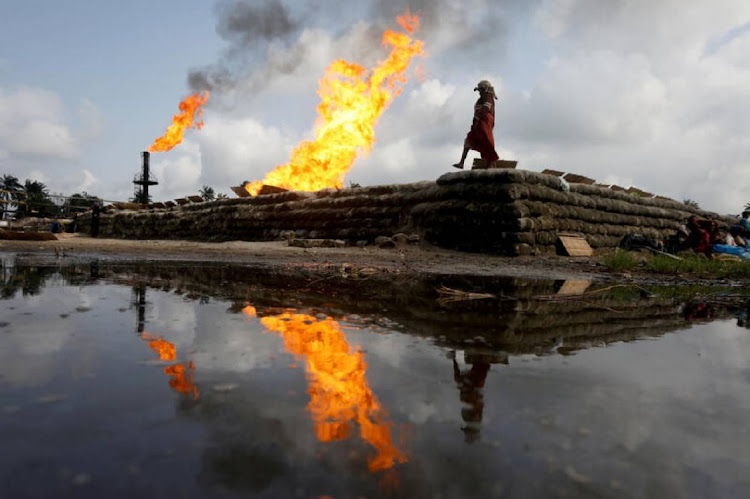 Two gas flaring furnaces and a woman walking on sand barriers are reflected in a pool of oil-smeared water at a flow station in Ughelli, Delta State, Nigeria in this September 17 2020 file photo. Picture: REUTERS/AFOLABI SOTUNDE

The pandemic may have marked a turning point in global efforts to address climate change. Yet the world’s burgeoning green shift will also produce uneven outcomes, which could leave many nations and populations worse off than they already are — Africa’s oil-dependent autocracies in particular.

Countries constituting more than 70% of the global economy have pledged to reach net-zero greenhouse gas emissions by mid-century, which scientists say is necessary to limit global warming to 1.5°C and avert climate catastrophe. China and the US — the world’s two largest oil consumers — led record growth in renewable energy in 2020. The world’s third largest carbon emitter, the EU, introduced sweeping new policies in July that feature legally-binding targets meant to achieve a 55% emissions reduction within a decade. In nearly half of the world it has become cheaper to build new renewable energy sources than continue operating fossil fuel power stations. 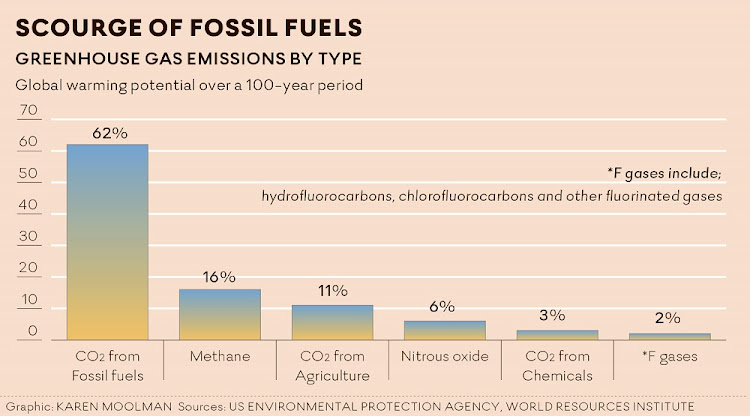 Apocalyptic weather extremes worldwide in recent months — scorching heat waves, grinding drought, flash floods and hellish wildfires — have also added pressure on governments to enact more stringent emission cuts ahead of the Cop26 UN climate summit in November, which is meant to signal the next chapter of climate action under the 2015 Paris Agreement. The sixth assessment report by the UN’s Intergovernmental Panel on Climate Change, released at the weekend, warned that the threshold of limiting global warming to 1.5°C will easily be reached, and likely surpassed in 20 years, without drastic changes to the global energy system.

In the medium to long term this will spell deep trouble for Africa’s petrostates as the gradual, yet significant shift away from fossil fuels will provoke further political instability in nations that are already teetering on the brink.

A petrostate is a nation highly dependent on the export of fossil fuels, with the bulk of GDP being built around this activity. Profits tend to be hoarded by a small minority of political and military elites, who siphon national income away from key institutions and use heavy-handed security forces to keep civil unrest at bay. A number of African states fall in this category including top Opec members Angola, Gabon and Nigeria, and others such as Congo-Brazzaville, Chad, Equatorial Guinea and South Sudan, despite their much smaller contributions to the global oil market.

As the global demand for oil slumps in coming years, diminishing exports may render petrostates unable to continue their uneconomical, but politically useful practice of subsidising the cost of domestic fuel and food staples. However, rescinding these subsidies can spark rapid inflation almost overnight, putting the cost of basic goods out of reach for most citizens. Increased unemployment will correlate with weakened service delivery as utility workers and vital public sector employees — civil servants, teachers and healthcare workers — face salary or job cuts.

Rising joblessness combined with newfound unaffordability also tends to spur protests that can sometimes garner enough momentum to topple brittle dictatorships. Sudan’s former president Omar al-Bashir was ousted in 2019 after 26 years in power by popular protests set off by scarcities of bread, fuel and medicine, largely mobilised by the Sudanese Professionals Association, a doctor-led group, after the secession of South Sudan in 2011 took away two thirds of Sudan’s oil production.

A drop in national income will likely mean it is fought over more intensely by political and military elites. Meanwhile, deep inequities will go unaddressed, which could end up stoking insurgencies. Autocrats will also have difficulty maintaining patronage networks, increasing the probability of coups in a region already prone to power grabs via military force.

Libya’s ruinous civil war has been dragged out for years by competing factions fighting over possession of oil fields and strategic infrastructure, with the aim of using export revenues to bankroll fighters and placate local warlords and militia groups. Investigators in South Sudan, which has been engulfed in violence for the majority of its independence, told the UN Human Rights Council in September 2020 that the plundering of resources was not just an offshoot of its conflict but a root cause of it.

Militants in Nigeria’s oil-producing south have long bombed pipelines, kidnapped oil workers and attacked government sites over being excluded from profits and seeing their local ecosystem become one of the most polluted places on Earth. A 2009 amnesty deal fostered temporary peace, but the area’s largest militant group, the Niger Delta Avengers, warned in a statement on June 26 it was launching a new offensive with the goal of “humbling the economy into permanent recession”. It remains to be seen whether the passing of the Petroleum Industry Bill by Nigeria’s parliament in July will serve one of its underlying purposes of better distributing oil revenues to impoverished regions and those affected by environmental degradation.

In Southern Africa, a growing Islamist insurgency in Mozambique’s northern province of Cabo Delgado is centred on a $20bn liquefied natural gas development by French company Total that locals view as a manifest betrayal by the distant government in Maputo. What began in 2017 as a low-level terror campaign by radicalised, disaffected youth lashing out in a neglected region with endemic poverty has morphed into an internationalised conflict that has nascent ties to the Islamic State, threatens neighbouring countries and is drawing in foreign troops, extremists, mercenaries and special forces alike.

Africa’s petrostates need to show vision by diversifying away from fossil fuels before it is too late. In the absence of serious and forward-looking economic diversification plans in other sectors, steep reductions in oil and gas revenues will mean these governments will find it harder to meet the needs of rapidly growing populations or themselves adapt to the destabilising consequences of climate change.

The oil price crunch, which has been lingering since the 2014 crash, has pushed those that are most susceptible — including Angola, Gabon and Nigeria — toward policy reforms aimed at streamlining activity in the sector, moving up the value chain and generating additional revenue from downstream developments such as refining. Nigeria is doing its best to pull back on its decades-long fuel subsidy while undergoing market reforms, but is finding it hard to gain traction given the societal-wide reliance on cheap fuel and pressure from labour unions to maintain price stability.

Other financial innovations include tying money to the protection of Africa’s natural assets, rather than their extraction. Gabon, for example, is creating a new model to attract funding for the preservation of its forests as carbon sinks, rather than the exploitation of its oil. The African Development Bank (AfDB) in partnership with the Climate Investment Fund, a multilateral finance mechanism for developing countries, has since 2010 also been spearheading the provision of grants and concessional loans to African countries to advance green agendas. In March the AfDB released a report detailing the potential for green investment banks to support African nations to meet their climate targets under the Paris Agreement without having to sacrifice their development goals.

Hydrocarbons will continue to play a part in the global energy mix and in bankrolling national budgets in the near future. But in the medium to long term African petrostates need to diversify economically to both curb global fossil fuel consumption and nurture greater political stability. Balancing between local needs and global imperatives will be the core challenge — though with the support of additional green financing instruments it is indeed possible.

• Hiebert, a researcher and analyst based in Canada, is former deputy editor of  Africa Conflict Monitor. Williams, an energy and mining consultant, is associate director of In On Africa, a Johannesburg-based research consultancy.

They ignore the reduction in cold extremes and the emergence of vast new green areas, focusing only on downsides
Opinion
11 months ago
Next Article