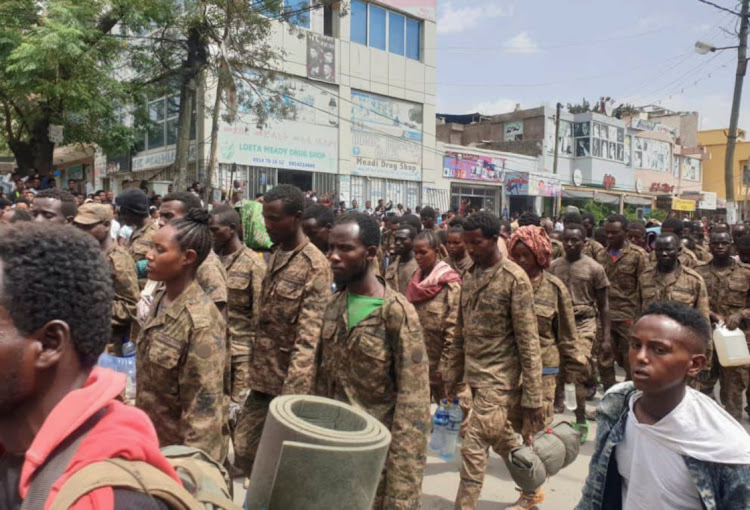 Humera, Ethiopia/Nairobi — The capture of the Tigray regional capital by its ousted rulers this week was a dramatic setback for Ethiopia’s government, diplomats and analysts say, opening a new chapter in a brutal war but by no means bringing it to an end.

A showdown is brewing over rich farmlands in the west of Tigray and humanitarian agencies say they still can’t deliver enough aid to hundreds of thousands of people facing famine.

Forces loyal to the Tigray People’s Liberation Front (TPLF), the party that dominated Ethiopia’s government for nearly three decades, took control of Mekelle on Monday night, seven months after they withdrew from the city.

The government of Prime Minister Abiy Ahmed, whose 2018 ascent marked the end of TPLF power, played down the reversal. It declared a unilateral humanitarian ceasefire and said its soldiers left Mekelle to tend to greater security threats elsewhere.

But the TPLF and international observers described the turnaround as a rout for the military, the Ethiopian National Defence Force (ENDF).

Tigrayan forces had launched an offensive as Ethiopia geared up for national elections on June 21. Residents and diplomats said they captured towns to the north and west of Mekelle, and pushed into the centre of Adigrat, the northern region’s second-biggest city.

“They were surrounding Mekelle for two to three days,” one senior diplomat in the capital, Addis Ababa, told Reuters. “The ENDF realised they were going to get slaughtered or leave. They decided to leave.”

The TPLF rapidly seized control of the region’s main cities and roads, largely without a fight, as pro-government forces withdrew to the contested west of Tigray, according to a UN report.

On Thursday the TPLF vowed to drive the military and its allies — troops from neighbouring Eritrea and the Ethiopian region of Amhara — from the rest of Tigray.

“We are closing in on both the western and southern parts of our territory ... so we can fully liberate every square inch of Tigray,” TPLF spokesperson Getachew Reda told Reuters by satellite phone.

Getnet Adane, Ethiopia’s military spokesperson, and Billene Seyoum, spokesperson for the prime minister, did not respond to questions about the TPLF’s and diplomats’ assertions.

In his first public comments after Mekelle’s capture, Abiy said the city was no longer the “centre of gravity for conflicts”. He said the army “was being stabbed in the back by its own”, a reference to Tigrayan civilians he accused of denying water to exhausted soldiers, burying weapons in churchyards and lying to aid workers to get extra food rations for the TPLF.

Abiy’s government has been battling the TPLF since early November, when it accused the then-governing party of Tigray of attacking military bases across the region, a charge the TPLF has denied.

The fighting followed months of deteriorating relations between the TPLF and the government. The TPLF accuses the government of discrimination against ethnic Tigrayans and attempts to centralise power. The government says it is cracking down on a TPLF “criminal clique”.

Eritrea and the Amhara region sent troops into Tigray to support the army in the first days of the war. Eritrea fought a brutal war against Ethiopia from 1998 to 2000 and “will be absolutely worried, possibly even panicked by resurgent Tigrayan forces”, said Murithi Mutiga, Horn of Africa project director at the International Crisis Group.

Eritrea’s information minister did not respond to a request for comment.

Amhara officials say they have taken back a swathe of territory, equal to about a quarter of Tigray, that was historically theirs and have no intention of leaving.

Tigrayan officials say the western area has long been home to both ethnic groups and accuse Amhara forces of driving out hundreds of thousands of ethnic Tigrayans, which the Amhara regional administration strongly denies.

The fighting is believed to have killed thousands and displaced more than 2-million. The UN has spoken of possible war crimes by all sides, including mass killings of civilians and gang-rapes.

The government controls electricity, telecommunications and internet connections, which are out throughout Tigray, the UN said this week. Most roads into the region, where the UN says more than 350,000 people face famine conditions, are blocked.

Government officials on Friday denied accusations by the TPLF and humanitarian agencies that the government was preventing aid from reaching Tigray and said it would support UN flights to the region.

On Thursday two bridges over the Tekeze River near the northern town of Shire were destroyed, making it even more difficult to deliver aid, the UN World Food Programme said.

It was not immediately clear who was responsible. The government blamed the TPLF. Residents and humanitarian officials pointed the finger at the military or Amhara forces.

Shire and other towns east of the river are now controlled by Tigrayan forces. Ethiopian and Eritrean soldiers withdrew to areas west and south of the river, according to two security officials in the town of Humera, in Amhara-controlled western Tigray.

Amare Goshu, who heads Abiy’s Prosperity Party in the area and works closely with the military and Amhara regional forces, said they were prepared to make a stand if TPLF fighters crossed the river.

“We have a right to defend ourselves,” he told Reuters.

On Thursday Humera was teeming with Ethiopian soldiers, Amhara regional police and local militiamen, who sat under trees in outdoor coffee shops, their rifles within arms’ reach.

Zewdu Tarekegn, an ethnic Amhara farmer, said the TPLF should not try to attack Humera.

“A polished gun is waiting for them,” he said.

Government denounces accusation of weaponising aid as ‘beyond the pale’, says it's working to restore infrastructure
World
6 months ago

Now on the offensive, TPLF takes control of the regional capital in  sharp reversal of eight months of conflict
World
6 months ago
Next Article