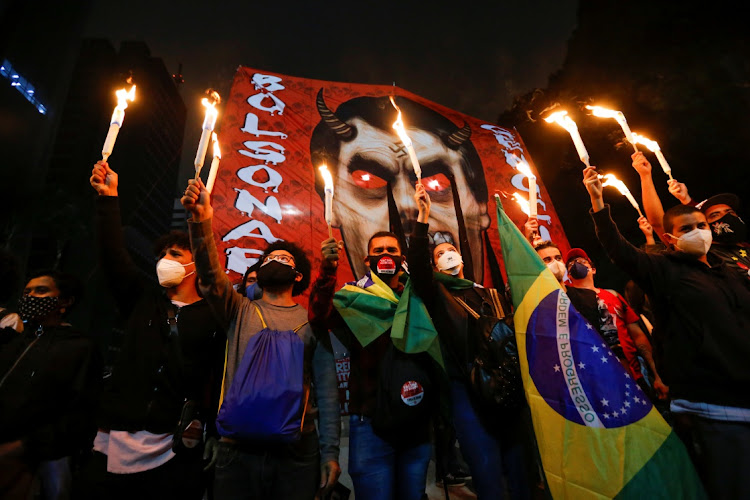 Brasilia — Brazil’s far-right President Jair Bolsonaro is in a tight spot, caught between the rock of impeachment threats and the hard place of dwindling public support, as corruption scandals over Covid-19 vaccine deals encircle his administration.

On the one hand, if he denounces allies in Congress linked to alleged attempts to profit on vaccine orders, Bolsonaro risks losing the backing of the fickle cluster of centre parties with which he has allied to ensure bids to impeach him go nowhere.

But if he chooses to protect the scandal-hit politicians and their parties, Bolsonaro could be stained by graft charges ahead of the 2022 election. He is already down in the polls.

The Covaxin scandal, in which allies are accused of putting undue pressure on health ministry officials to hasten a purchase for the Indian vaccine Covaxin, has become a nightmare for Bolsonaro in part because it allegedly involves the government’s chief whip in the lower house of Congress, Ricardo Barros.

Bolsonaro and Barros have denied all wrongdoing.

The accusations have given Bolsonaro’s opponents ample ammunition to attack him, with the president’s dependence on centrist parties, many of whose leaders face graft investigations, belying his campaign vow to clean up Brazilian politics that got him elected in 2018.

“Bolsonaro faces a continuous process of weakening. It’s hard to say it will lead to an impeachment, but it does hurt his chances of re-election,” said Claudio Couto, political scientist at the Getulio Vargas Foundation think-tank in Sao Paulo.

More than half a million Brazilians have died from Covid-19, yet Brazil lags many other countries in vaccinations. Only 11.8% of its population are fully vaccinated. This has made allegations of graft surrounding vaccine orders particularly damaging for the president.

A Senate inquiry into the government’s handling of the pandemic has dug up alleged corruption involving health ministry insiders and pro-Bolsonaro legislators accused of seeking to overpay the Indian maker of Covaxin, Bharat Biotech.

It is unlikely that the probe will bring down Bolsonaro, but it has produced daily headlines that increase public perceptions of incompetence and suspicions of corruption in his government.

On Tuesday, at the request of three senators on the inquiry commission, a supreme court judge asked Brazil’s top prosecutor to investigate the president for dereliction of duty.

On Wednesday, Bolsonaro fired a health ministry official who was a political protégé of Barros after he reportedly took a bribe in another vaccine deal.

Hours later, legislators from across the political spectrum, social groups and lawyers filed a collective impeachment request, combining dozens of previous filings that the speaker of the house, a Bolsonaro ally, has declined to act upon.

Some politicians have begun to quit the coalition, known as the Centrao, that is shielding Bolsonaro.

Gilberto Kassab, a former Sao Paulo mayor and leader of the centre-right Social Democratic Party, did so in June, angling to field an independent presidential candidate in 2022.

A survey published last week by pollster IPEC showed that disapproval of Bolsonaro’s government has risen to 49%, more than double the approval rate of 24%. IPEC confirmed other polls showing that former leftist president Luiz Inacio Lula da Silva would defeat Bolsonaro handily if the election was held now.

“With falling popularity and less budget resources available, the Centrao could abandon Bolsonaro, because it has done so with past presidents,” said Carlos Melo, politics professor at the Insper business school in Sao Paulo.

Previous cases were Fernando Collor de Mello, who resigned facing impeachment in 1992, and Dilma Rousseff of Lula’s Workers Party, who was impeached in 2016.

“Their alliance with Bolsonaro is based on self-interest. As long as he has something to give them, government positions or funds, they will continue with him,” Melo said. “But as soon as he appears to be in trouble, they will abandon ship.”

The worst water crisis in almost a century is fuelling inflation, presenting a challenge for Brazil’s central bank and the president’s re-election ...
World
1 month ago

President Jair Bolsonaro has denied wrongdoing, saying on Monday he was not aware of any irregularities
World
1 month ago

It's possible and necessary to improve the Brazilian agribusiness industry while preserving the environment, a study finds
World
1 month ago
Next Article