Government denounces accusation of weaponising aid as ‘beyond the pale’, says it's working to restore infrastructure 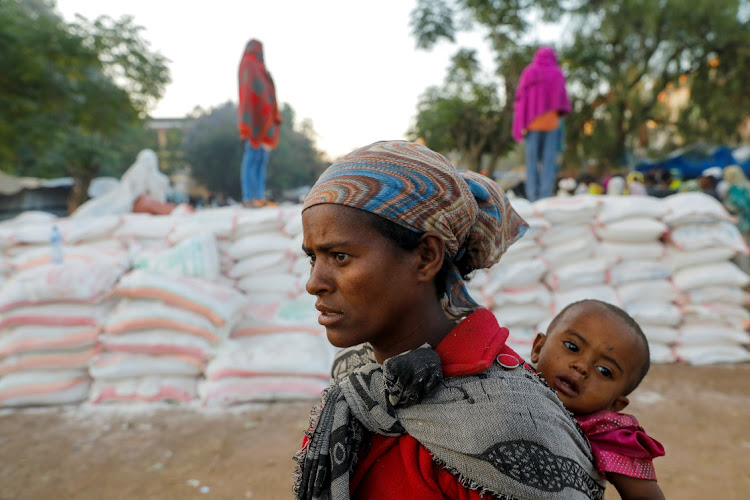 A woman carries an infant as she queues in line for food in the town of Shire, Tigray region, Ethiopia. File photo: REUTERS/BAZ RATNER

Addis Ababa — Ethiopia on Friday denied blocking humanitarian aid to the northern Tigray region, where hundreds of thousands of people face starvation, and said it was rebuilding infrastructure amid accusations it is using hunger as a weapon.

The Tigray People’s Liberation Front, the provincial authorities who were driven out by Ethiopian forces and troops from neighbouring Eritrea last year, returned to the regional capital Mekelle this week to cheering crowds, in a dramatic reversal of eight months of war.

The Ethiopian government declared a unilateral ceasefire which the TPLF has dismissed. There are reports of continued clashes as pressure builds internationally for all sides to pull back.

“The allegation that we are trying to suffocate the Tigrayan people by denying humanitarian access and using hunger as weapon of war is beyond the pale,” deputy prime minister Demeke Mekonnen told diplomats in Addis Ababa.

“We have been exerting every possible effort to rebuild damaged infrastructure and restore electricity, telecoms, internet and banking services.”

Shortly before Mekelle was taken, Reuters saw a convoy of 34 trucks — each laden with 43 tonnes of food — stopped in the Tigrayan town of Mai Tsebri. Blue flags from the UN’s World Food Programme (WFP) hung from the cabins, sodden with rain.

The trucks had waited four days at a checkpoint controlled by government-allied Amhara regional forces. Finally, they unloaded the food, without having reached the area where it was needed.

Aid has been blocked since the TPLF took the capital, a senior diplomat in Addis Ababa said.`

In a speech on Tuesday, Prime Minister Abiy Ahmed said Tigrayans needed to reflect on who they chose as leaders.

“If they are cheering after we left — while we were the ones who had been giving them wheat — [then] they need a time of silence,” he said.

The UN said in early June at least 350,000 people in Tigray faced famine. The US Agency for International Development last week estimated the number at 900,000.

The TPLF dominated the central government for decades before Abiy came to power in 2018. His government has been battling the TPLF since late last year, when it accused the TPLF of attacking military bases in Tigray and sent federal troops to quell the unrest. Thousands of people have been killed.

TPLF spokesperson Getachew Reda has repeatedly said this week that the group condemns the government’s shutdown of services as a continued act of war.

He accused the military and Amhara regional forces of destroying one of three bridges across the Tekeze River on Thursday. The forces also damaged the two other bridges, he said, calling the destruction “a deliberate effort” to ensure that aid doesn’t reach the people of Tigray.

Demeke’s comments denying that the government was blocking aid “fly fully in the face of the reality on the ground”, said Getachew, and alleged that the government had systematically destroyed infrastructure, including farming equipment needed for the planting season.

The WFP also raised alarm at the destruction on Thursday of a bridge across the Tekeze, saying that even before that, the agency had food destined for people in famine conditions that was being held up.

With the bridge knocked out, a WFP official told reporters in Geneva on Friday: “We currently have one possible road into Tigray that is much longer and will take much more time to reach hard hit areas of Tigray.”

The WFP has resumed deliveries in Tigray, but faces continuing access problems and is “way behind” in bringing supplies to people facing starvation, its emergency coordinator, Tommy Thompson, said.

Speaking by satellite phone from Mekelle, he said fighting continued in some “hot zones”, and that its 35 staff had been “trapped” during the hostilities.

“WFP suspended its operations for only about 48 hours and we began operating in the northwest fairly quickly thereafter, managing to reach probably by the end of this weekend probably about 40,000 people,” he told a briefing in Geneva.

But Thompson said he was “cautiously optimistic” air services could be set up in days to speed the delivery of aid.

Government official Redwan Hussein said that airspace would be opened “in case UN airplanes need to transport aid. For anything that happens on the ground, the government will not take responsibility because that chance is now closed.”

Now on the offensive, TPLF takes control of the regional capital in  sharp reversal of eight months of conflict
World
4 months ago