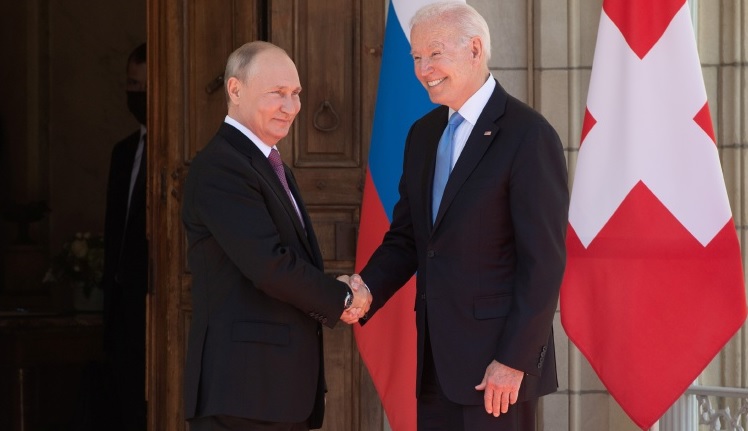 US President Joe Biden said he confronted Russian President Vladimir Putin about human rights violations at a summit on Wednesday, including imprisoned opposition leader Alexei Navalny, and warned him against further cyberattacks on American infrastructure.

Biden said he gave Putin a list of 16 kinds of “critical infrastructure” that should be “off limits” for cyberattacks, and warned Putin the US would respond “in a cyber way” if they were targeted by hackers.

But he also said he saw the possibility that relations between the countries may improve.

He said that in nearly three hours of meetings in Geneva, the two leaders agreed to work together to reduce the threat of nuclear war, ensure Iran doesn’t obtain nuclear weapons and to avoid conflict in the Arctic.

In a contrast with his predecessor, Donald Trump, Biden led off his summary of the summit by describing an admonishment of Putin for his human rights record. Trump avoided or minimised human-rights issues in his discussions with foreign leaders such as Putin and China’s Xi Jinping.

“How could I be the president of the US and not speak about the violation of human rights, I told him,” Biden said in a news conference after the meetings in Geneva. “That’s why we’re going to raise our concerns about cases like Alexei Navalny.”

Biden said he made clear to Putin that if Navalny dies in prison, “the consequences of that would be devastating for Russia”.

The Russian president branded Navalny an instrument of the US effort to contain his country, hit back at Washington’s own human rights record and denied accusations of Russian hacking.

Biden and Putin met to try to defuse tensions that they agreed had reached the highest in years between the former Cold War adversaries.

Biden proposed the meeting in hopes of stabilising the relationship after a decade that has seen Russia attempt to interfere in US elections, annex Crimea from Ukraine, and harbour groups of cybercriminals who have wreaked havoc on key industries across the US and Europe. Still, US officials entered the meeting with low expectations for a breakthrough — and braced for Putin’s penchant for troublemaking on the international scene.

Putin said in his own news conference that the sides would return their respective ambassadors to their posts in Washington and Moscow and that he and Biden had agreed to further talks on arms control, cybersecurity and diplomatic ties.

The talks with Biden were “on the whole productive, substantive, concrete and took place in an atmosphere aimed at achieving results, the most important of which was that glimmer of trust”, Putin said. Each side understood the other’s red lines on key issues, he said.

Putin said any move by the Biden administration to expand sanctions after the summit would represent a “missed opportunity”.

Biden declined to say whether he now trusts Putin.

“This is not about trust, it’s about self-interest and verification of self-interest,” he said. “The proof of the pudding is in the eating.”

Biden said the men also discussed “in detail” steps they can take on arms control, including a “mechanism” to limit “new and dangerous weapons” that could raise the risk of war.

The two leaders issued a joint statement after the summit saying that they had agreed to “lay the groundwork for future arms control and risk reduction measures”.

The summit “demonstrated that, even in periods of tension, they are able to make progress on our shared goals of ensuring predictability in the strategic sphere, reducing the risk of armed conflicts and the threat of nuclear war”, the statement said. “Today, we reaffirm the principle that a nuclear war cannot be won and must never be fought.”

Biden insisted that “there were no threats” made during the summit, but in discussing cybersecurity, the US president said he used a pointed example of potential retaliation.

“When I talked about the pipeline that ransomware hit in the US, I looked at him and I said, how would you feel if ransomware took on the pipelines from your oilfields?” Biden said. “He said it would matter.”

Earlier in 2021, ransomware developed by hackers the Biden administration says are based in Russia was used to shut down the Colonial Pipeline fuel line serving the east coast. Biden didn’t blame the Kremlin directly for the attack but said Putin’s government had a responsibility to police hackers operating from its country.

Biden said Putin also understands after their summit that Biden would respond if Russia again interferes in American elections.

“Whether I stopped it from happening again, he knows I will take action,” Biden said. “He knows there are consequences.”

As the summit opened, Biden remarked that it represented the meeting of “two great powers”. But in his news conference, he was more critical of the nation that has emerged from Putin’s more than two decades atop its government.

“He decided that the way for Russia to sustain itself as a ‘great power’ is to unite the Russian people just on the strength of the government,” Biden said. “That’s the choice that was made. I’m not going to second-guess whether it could have been fundamentally different, but I do think it does not lend itself to Russia maintaining itself as one of the great powers in the world.”

In their discussion of human rights, Biden said he also raised the case of two former US marines jailed in Moscow, Paul Whelan and Trevor Reed.

US officials have strongly criticised both convictions as politically motivated. Putin said this week Russia might be willing to consider swapping them for its nationals held in US prisons.

In his news conference, Putin dismissed criticism of his human rights record by drawing comparisons with the US, including the Trump administration’s sometimes violent response to Black Lives Matter protests, arrests of people who broke into the US Capitol during the January 6 riot by Trump’s supporters, and US military strikes that killed civilians in Afghanistan and Iraq.

Investigators trace bitcoin valued at about $2.3m of the $4.4m in cryptocurrency ransom paid to DarkSide, a Russia-linked cybercrime group
World
11 months ago