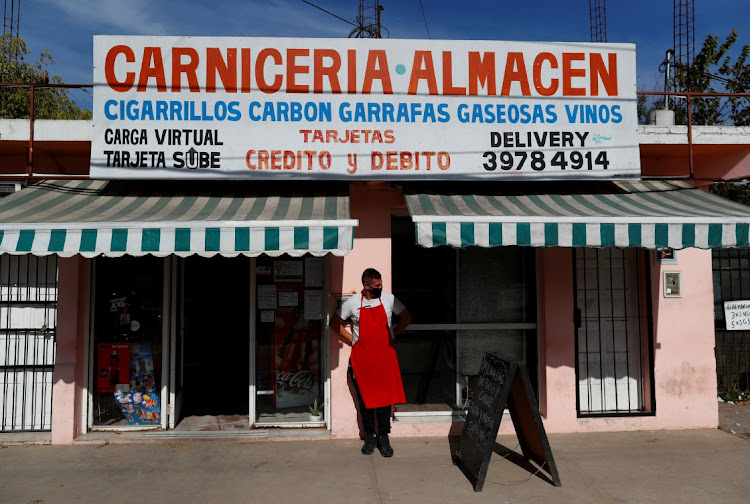 Butcher Pablo Alberto Monzon waits for costumers outside his shop in General Pacheco on the outskirts of Buenos Aires, Argentina, in this May 19 2021 file photo. Picture: REUTERS/AGUSTIN MARCARIAN

Paris — A strengthening world recovery from the Covid-19 pandemic risks leaving behind many regions, fuelling inequalities across and within borders, the Organisation for Economic Co-operation and Development (OECD) said on Monday.

As the Paris-based group revised up its 2021 global growth forecast to 5.8% from 5.6%, it warned of gaping differences that mean living standards for some people will not return to pre-crisis levels for an extended period.

In countries, including Argentina and Spain, more than three years will elapse between the onset of the pandemic and a recovery of per capita economic output, according to the new projections. That compares with just 18 months in the US and under a year in China.

“It is with some relief that we can see the economic outlook brightening, but with some discomfort that it is doing so in a very uneven way,” OECD chief economist Laurence Boone said. “The risk that sufficient post-pandemic growth is not achieved or widely shared is elevated.”

The assessment sounds a note of caution as confidence surges in the world’s richest countries with the lifting of restrictions and the acceleration of vaccination campaigns.

The OECD praised governments for exceptionally swift and effective policy support that is now fuelling a rebound in trade, manufacturing and consumer spending. That will limit the scars the crisis leaves behind, the 38-member organisation said.

But it warned the problem of diverging fortunes could worsen further because of a failure to get enough vaccines and support to emerging and low-income economies, which already have less capacity to absorb shocks and could face sovereign funding issues.

Without inoculations in all countries, the OECD said new variants and renewed lockdowns could hit confidence, plunge activity back into a disruptive stop-go pattern, and bankrupt firms.

“The most vulnerable members of society would risk further suffering from prolonged spells of inactivity or reduced income, exacerbating inequalities, across and within countries, and potentially destabilising economies,” Boone said.

The OECD also flagged a new threat of inflation due to higher operating costs, with virus containment and supply disruptions leading to shortages of components, and muted competition as a result of bankruptcies. Tensions should fade by the end of the year as production capacity normalises and consumption shifts toward services.

“Inflation is expected to increase temporarily, but the longer-term outlook remains uncertain, with upside risks,” the OECD said. “A combination of possible negative supply-side effects could push up inflation by more than projected.”

There is also a risk that financial markets fail to look through the disruption. It called on central banks in advanced economies to maintain accommodative policy and allow temporary overshooting of their inflation goals.

For governments, the OECD prescribed a combination of flexible fiscal support targeted particularly at small firms, and an effort to restore confidence with credible plans to repair public finances in the longer term. It also said public money should be spent swiftly on investment for a digital and lower-carbon economy.

“As countries transition toward better prospects, it would be dangerous to believe that governments are already doing enough to propel growth to a higher and better path,” Boone said.

HILARY JOFFE: SA must confront its demons if it is to achieve long-term growth

The government's infrastructure investment drive could improve the efficiency of the economy and the intention is that it should - though it is ...
Opinion
2 weeks ago
Next Article