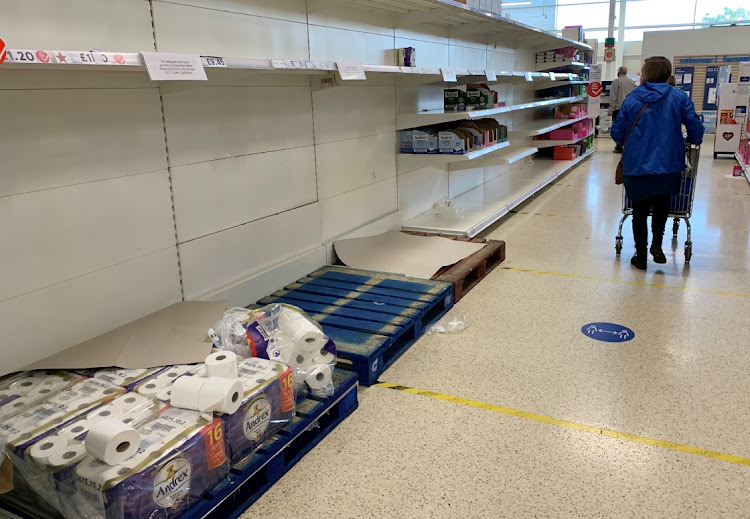 A shopper pushes her trolley along an almost empty toilet paper aisle in a Tesco supermarket following the outbreak of the Covid-19 coronavirus disease in Manchester, Britain. Picture: REUTERS/Phil Noble

The world became intimately acquainted with the idea and practice of hoarding toilet paper last year. Grocery shelves were suddenly cleared as people rushed to build up their own personal supplies of the white stuff. While the supply of bathroom tissue hadn’t suddenly changed, a sharp jump in demand for it created the appearance of a shortage.

Now, Bank of America economist Ethan Harris says that the toilet paper-esque strategy of hoarding has gone global, in the sense that companies are increasingly buying essential materials, components and other inputs to manage potential future supply shocks and deal with resurgent demand.

“The clogging up of global supply chains could ease over time as specific shocks fade, but the fundamental problem is one of strong demand and low inventory. New technology such as tracking systems has enabled businesses to operate with very low inventories. That is great in good times, but it makes the system highly vulnerable to disruption. Even worse, faced with shortages, companies are starting to double order to ensure that they are high in the queue. This is the business sector equivalent of emptying the grocery store in front of a hurricane or hoarding gas or toilet paper at the first hint of shortage,” Harris said.

He is not the only one to make such an observation. In a commodities note published late last week, analysts at Goldman Sachs led by Nicholas Snowdon said that China is “is no longer the marginal buyer dictating price — as has been the case over much of the past two decades — but [is] now being crowded out by Western consumers”.

Instead, Western economies are increasingly acting like the China of the past in building up big stockpiles of indispensable commodities to protect against price spikes and shortages. And while the Goldman analysts certainly did not mention toilet paper in their note, the thought process is similar.

Demand has far outstripped supply thanks to a mismatch between the ordering needs of paranoid consumers and the ability of suppliers to ramp up production. After all, most businesses have spent recent years perfecting the idea of just-in-time supply chains.

So what does the new strategy of demand-led hoarding mean for the economy? As the Bank of America economists point out, it means we should be identifying the effect of supply-side shortages on economic data, rather than assuming that activity is purely a function of demand.

“In a supply-constrained world we need to rethink what constitutes ‘weak’ or ‘strong’ data. The US housing market offers a prime example. Until recently, all housing indicators were booming, with strong sales, construction and prices. In the last few months, only prices continue to surge amid material shortages and low inventory. Thus the slowing in activity is not a sign of weakness, but of prices rising instead of quantities. Against this backdrop it is unclear why the Fed continues to buy $40bn in mortgage-backed securities monthly.

“Another example is the US labour market. It is important to look closely at the composition of the job report to judge the role of supply-side constraints. Moreover, looking at job growth is insufficient, we also have to look at wages. The April jobs report was seen as a big disappointment. However, it actually suggested a surge in nominal income for the month. If you combine the 0.18% increase in jobs, the 0.3% increase in the length of the work (from 34.9hrs / week to 35.0) and the 0.70% increase in wages, nominal income surged by 1.17% or an almost 15% annualised rate.”

That is something to keep in mind when nonfarm payrolls for May are released on Friday.

HILARY JOFFE: SA must confront its demons if it is to achieve long-term growth

The government's infrastructure investment drive could improve the efficiency of the economy and the intention is that it should - though it is ...
Opinion
2 weeks ago

South Africans are prioritising medical aid membership despite rising unemployment amid the pandemic, supporting Netcare's partial recovery as ...
Business
2 weeks ago
Next Article