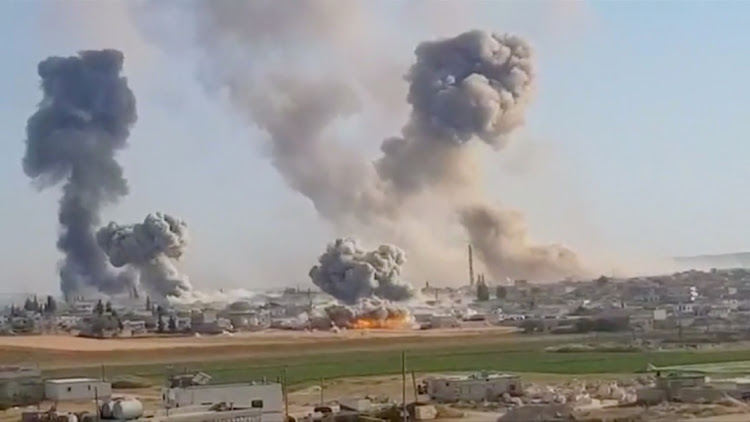 Plumes of smoke rise from a location, said to be Khan al Subul, Idlib province, Syria, targeted in a strike on May 28 2019. Picture: WHITE HELMETS VIA REUTERS

London/Cairo/Riyadh/Singapore — Global attention right now is on fighting the coronavirus pandemic, but that doesn’t mean the world’s conflict spots have gone silent.

Some leaders are looking to exploit the virus as a distraction that allows them to advance goals such as cracking down on dissent. Equally, the epidemic feeds into existing tensions such as the struggle between China and the US for global strategic and economic influence.

The consequences may not necessarily all be negative. As the International Crisis Group notes, “natural disasters have sometimes resulted in the diminution of conflicts,” as rivals are forced to work together.

What seems clear, though, is that Western nations face years of strain on their economies and constraints on government spending, says Tim Huxley, executive director for Asia at the International Institute for Strategic Studies.

That may lead to a fundamental re-examination of priorities, and a shift away from defence spending and towards health and welfare, he says. After all, “Western democracies are armed to the teeth but cannot provide security against threats to human and environmental security.”

Here’s a look at some hotspots in the time of Covid-19.

March saw the reclusive regime break a three-month lull in missile testing by leader Kim Jong-un. It fired a series of ballistic missiles during the month — not long-range enough to draw US President Donald Trump’s ire, but enough to remind the world of its existence.

Kim has been threatening to take a “new path” in nuclear talks with the US in 2020, if Trump did not make a more appealing offer.

The tests could also be a message to neighbors South Korea and China. Pyongyang often uses military provocations to nudge others into giving it aid, and the country’s antiquated and underfunded medical system would need help to cope with a serious coronavirus outbreak.

After months of relative calm in the disputed South China Sea — one of the world’s key waterways for trade and with large stores of energy and fish — analysts have noted the return of Chinese fishing fleets and coast guard ships to areas claimed by other countries.

Most of the Chinese vessels that operate in the southern part of the waters are based out of Guangxi province’s Beihai city, which halted operations due to the virus, said Ryan Martinson, assistant professor of the China Maritime Studies Institute at the US Naval War College. “Now the Beihai fishing fleet has put to sea again,” he said.

By the end of February, 360 fishing vessels had set sail with some operating in the Spratly Islands, which are at least in some part also claimed by Taiwan, Malaysia, Brunei, the Philippines and Vietnam. State-run Xinhua News Agency reported China established two research stations there in March. “The bottom line is that the PRC [People's Republic of China] has very likely resumed operations to assert its claimed ‘maritime rights’,” Martinson said.

The isolated state has struggled with the virus, which has sickened or killed senior officials and infected about 50,000 people in total. The US has refused to lift sanctions on Tehran, saying they do not prevent medical aid getting through.

Some members of the Trump administration have speculated in private that the challenges for Iran from the virus and a cratering economy might yet create space for regime change. Though the virus may also make a desperate Iran even more of a military threat, General Kenneth McKenzie, the head of US. Central Command, said in March.

Tussles continue as the US military recently struck back at an Iraqi militia closely aligned with Iran that it believed responsible for a rocket attack that killed two Americans and a Briton.

Trump on Wednesday warned Iran against what he said was a possible “sneak attack” the Islamic Republic was planning against US troops in Iraq. Trump indicated in a tweet that the US had “information” about a possible attack but did not elaborate.

Upon information and belief, Iran or its proxies are planning a sneak attack on U.S. troops and/or assets in Iraq. If this happens, Iran will pay a very heavy price, indeed!

Syria’s civil war has killed hundreds of thousands, displaced millions, and hollowed out its economy. Russia and Turkey had agreed a ceasefire in northern Idlib province in March (Russia backs Syrian forces there, Turkey the rebels), but the truce is precarious.

Medecins Sans Frontieres has warned Covid-19 “may spread very quickly” in Idlib, where many live in camps. A further humanitarian disaster would potentially set off fresh geopolitical tensions in the region.

Germany is alarmed at the prospect of another wave of refugees moving in the direction of Turkey and Europe on the back of the spread of the virus in the border region, Der Spiegel reported on Wednesday, citing a confidential government analysis.

Rival factions in the oil-rich north African nation are at war, and the pandemic is doing nothing to ease the conflict.

Over the past week, eastern commander Khalifa Haftar’s forces have shelled the capital Tripoli, where the internationally recognised government is based. Clashes east of the capital have killed dozens. Lined up on either side of the conflict are the likes of Turkey, the United Arab Emirates and Russia.

“One of the impacts of Covid-19 on the action of the warring parties in Libya has been that both weaponise the virus as part of their propaganda, accusing one another of being responsible for spreading the disease,” says Emadeddin Badi, a non-resident fellow at the Atlantic Council.

Haftar‘s CoS & head of #COVID19 committee: “We will pursue any doctor who says things that are wrong. We consider anyone who criticizes as a traitor. Criticism is not permitted.”

This follows the arrest of a doctor in Benghazi who openly criticized conditions of hospitals. pic.twitter.com/zq9gak6NOn

Yemen has reported no Covid-19 cases, but an outbreak in the Arab world’s poorest country could be disastrous. Yemen has been ravaged by a five-year war which has created what the US says is the world’s worst humanitarian disaster. Even before the conflict, medical services in Yemen were basic.

The World Health Organisation is working with Yemeni authorities to prepare for a possible outbreak. Saudi Arabia has sent medication and supplies. In the meantime, hostilities continue. On Saturday night, the Saudis intercepted two missiles over Riyadh launched by Houthi rebels from Yemen. On Monday, Saudi Arabia said the Saudi-led coalition that supports Yemen’s government retaliated with air strikes on Houthi targets.

Ukrainian President Volodymyr Zelensky discussed the conflict with Russia-backed separatists in the country’s east with German Chancellor Angela Merkel on Tuesday, as efforts continue to try to organise summit talks to resolve the war that has killed at least 13,000 since 2014. Merkel also offered German solidarity during the Covid-19 outbreak.

While international monitors regularly report low-level ceasefire violations, Ukrainian and Russian officials are continuing to negotiate possible exchanges of detainees after talks between Zelensky and his Kremlin counterpart President Vladimir Putin in Paris in December.

Russia remains under US and EU sanctions for its role in the conflict and for the 2014 annexation of Crimea. Putin marked the sixth anniversary of the takeover on March 18 by travelling to Crimea, which is now linked to Russia by a road and rail bridge.

Still reeling from defeat in Syria and Iraq and the death of leader Abu Bakr al-Baghdadi, the so-called Islamic State urged its followers in its Al Naba newsletter to take advantage of the pandemic to attack enemies.

The group, which commands affiliates across Africa and Asia, has continued to carry out deadly attacks. Last week, a gunman massacred dozens of congregants in Afghanistan’s capital Kabul after storming a Sikh temple. Over just two days in the last week of March, IS claimed attacks in Iraq, Syria, Egypt’s Sinai Peninsula and Nigeria.

Some leaders are working during the crisis to amass further power domestically. Among them, Putin, who is seeking constitutional changes that would allow him to rule to 2036. Hungary’s parliament handed Prime Minister Viktor Orban the right to rule by decree indefinitely. And in Venezuela, President Nicolas Maduro has ordered a lockdown in what is already a police state.

As the International Crisis Group said in a report in March, “unscrupulous leaders may exploit the pandemic to advance their objectives,” worsening domestic or international crises. That could mean crushing dissent at home or escalating conflicts with rival states, it said, all “on the assumption that they will get away with it while the world is otherwise occupied.”

The coronavirus has killed more than 51,000 worldwide with the global fatality rate now over 5% of all reported cases
World
1 year ago

US jobless claims at nearly 10-million in two weeks

A record 6.65-million people filed jobless claims in the week ended March 28, worse than the most dire estimate in Bloomberg’s survey of economists
World
1 year ago
Next Article