Greenpeace calls for Nestlé to act over single-use plastics 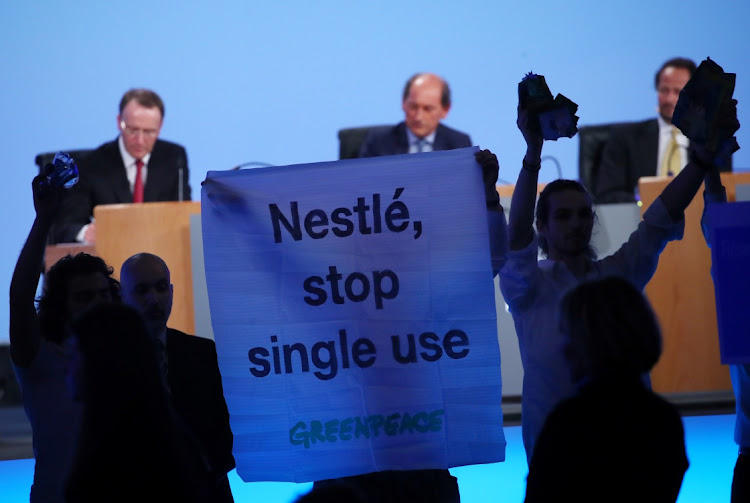 Jennifer Morgan, executive director at Greenpeace International, said the world’s biggest food group should set a target for reducing single-use packaging and invest in alternatives focusing on refill and reuse.

“Nestlé is a major contributor to the plastic crisis and environmental problem that we have right now,” Morgan said on the sidelines of the company’s annual general meeting in Lausanne, where Greenpeace activists intervened shaking banners.

Nestlé’s CEO Mark Schneider, said he thought focusing exclusively on reusable packaging was wrong. “Why rely on just one lever when you have four or five you can use,” he said, citing the importance of biodegradable packaging and recycling.

Growing concern over environmental issues — from climate change to plastic pollution — has triggered a wave of global student protests, piling pressure on policymakers and business leaders.

Coca-Cola, PepsiCo and Nestlé are the world’s biggest producers of plastic waste, according to a report in 2018 from Greenpeace and the Break Free From Plastic movement. It analysed 187,000 pieces of trash collected in 42 countries

Duncan Pollard, Nestlé’s head of sustainability, said the company agreed about the need to reduce plastic use. “But we need to make sure the new packaging solutions are safe and that consumers accept them,” he said , adding that it was too early to say plastic use had peaked.

Nestlé has said it used 1.7-million tons of plastic packaging in 2018 . Greenpeace said that was up 13%, but Pollard said Nestlé had since changed the way it measured plastic use and the true rise was below 3%.

In March, the European parliament approved a law banning a wide range of single-use plastic items by 2021.

Nestlé has vowed to make 100% of its packaging recyclable or reusable by 2025 and push the use of compostable and biodegradable materials polymers.

“Material substitution is a false solution,” Morgan said. “It will just shift the impact to the world’s forests and agricultural lands.”

Pollard said he did not share concerns about deforestation and thought the shift to paper would help tackle climate change. Nestlé was also working on a new system of water dispensers.

Greenpeace on Wednesday launched a “plastic monster” video showing a fictional “Nestlé Chief Plastics Officer” trying to buy a single-use plastic bottle of the company’s Pure Life water from a vending machine and having dead fish and slimy waste explode in his face instead.

The one-minute spot ends with the slogan “Tell Nestlé to stop single-use plastic.”

But Greenpeace Africa’s Melita Steele says regardless of whether SA is the worst or the tenth worst NO2 polluter, it is clear there is a serious ...
National
2 years ago

Nestlé needs a new product that still has patent protection, as cheap knock-offs knock Nespresso from its perch
Companies
2 years ago
Next Article

Roses are red, violets are blue, chocolate is pink

Coca-Cola to buy Costa Coffee, stepping into the ring with Starbucks and Nestlé

Roses are red, violets are blue, chocolate is pink

Coca-Cola to buy Costa Coffee, stepping into the ring with Starbucks and Nestlé