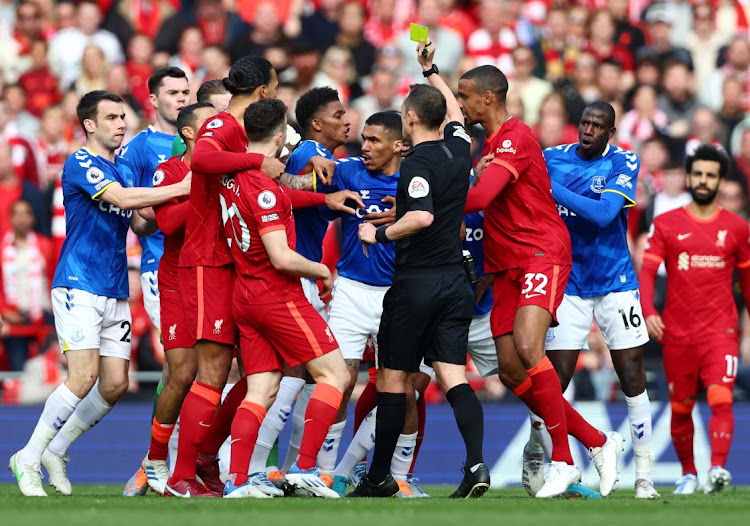 Sadio Mane of Liverpool (hidden) is shown a yellow card by referee Stuart Attwell during the Premier League match between Liverpool and Everton at Anfield on April 24, 2022 in Liverpool, England. Picture: GETTY IMAGES/CLIVE BRUNSKILL

London — Liverpool’s win over Everton on Sunday put their Merseyside neighbours firmly in the relegation zone.

Everton are now in the bottom three after Burnley’s win over Wolves, though they do have a game in hand over Burnley, but Everton’s remaining fixtures are far from easy.

Incoming Manchester United manager Erik Ten Hag must already be having sleepless nights over who to turn to to beef up a poor defence that has leaked seven goals in two matches.

Everton show fight but face unthinkable drop: Everton, stalwarts of the Premier League, face the real prospect of seeing their 68-year stay in the English top flight come to an end this season after a damaging weekend.

Burnley’s 1-0 win over Wolverhampton Wanderers coupled with Everton’s 2-0 loss at Liverpool in a feisty Merseyside derby on Sunday means Frank Lampard’s side are now in the bottom three.

They battled hard at Liverpool, and on another day could have got a result, but nothing is going right for them this term.

Everton have a game in hand on Burnley but their remaining fixtures include trips to Leicester City and Arsenal, as well as a home clash with Chelsea. Their Premier League fate is in their hands still but threat of relegation is now bigger than ever.

Bolstering Man United’s defence will be Ten Hag’s priority: Manchester United benched the out-of-form Harry Maguire at Arsenal after a difficult personal week for the centreback due to a bomb threat at his home, but their defensive woes continued in London, providing another reminder of the rebuild needed.

The returning Raphael Varane failed to clear a cross that led to Nuno Tavares’s early opener, while fullbacks Diogo Dalot and Alex Telles struggled throughout the game, leaving Victor Lindelof as the best player in a poor back four.

A 3-1 defeat means United have shipped seven goals in their last two matches after a 4-0 thrashing by Liverpool, making it clear that incoming manager Ten Hag must build from the back to take the struggling team forward.

Jesus gives reminder of what he can offer: Brazilian forward Gabriel Jesus was heavily linked with a move away from Manchester City in the British media this week, to reportedly make room for incoming Borussia Dortmund striker Erling Haaland.

But the 25-year-old gave coach Pep Guardiola a timely reminder of what he can do as he plundered four goals to fire the champions to a 5-1 victory over Watford on Saturday.

Jesus scored his first Premier League hat-trick in his 155th appearance in the competition. He was the fifth Brazilian hat-trick scorer in the competition, after Afonso Alves, Robinho, Roberto Firmino and Lucas Moura, but the first of those to score four in a single match.

Such a clinical display of finishing may persuade City there is room for both Jesus and Haaland in the ranks for next season.

Howe needs credit for raising Newcastle from the dead: Newcastle United did not win a game until December but have now claimed 10 victories in their last 14 Premier League matches as manager Eddie Howe’s revolution at St James’ Park gathers pace.

Bottom of the league five months ago, Newcastle got an emphatic 3-0 victory over seemingly doomed Norwich City on Saturday, which took them into the top half of the table and completed a remarkable turnaround.

They are playing with confidence, not least their new Brazilian recruit Bruno Guimaraes, who capped a fine performance with a goal.

It is true that they spent a lot of money in January to improve the squad, but knitting together this team packed with potential is Howe, with his tactical acumen and man-management skills.

Tuchel happy for Jorginho to stick with penalty technique: Chelsea boss Thomas Tuchel was a relieved man after Sunday’s 1-0 win over West Ham thanks to Christian Pulisic’s late strike, but things could have been different if they had dropped points after Jorginho’s penalty miss from a feeble effort.

The Italian midfielder shot straight at the goalkeeper in the 87th minute from a staggered run-up and hop — similar to how Manchester United midfielder Bruno Fernandes did when he missed the target from the spot in their defeat at Arsenal.

The technique has attracted its share of critics who prefer a straightforward approach, but Tuchel said he would not call for change. “It’s his style, he’s right to stick to it. He’s upset but happy with Pulisic to finish it,” Tuchel said.