Hammers relying on Europa League win to get into Champions League 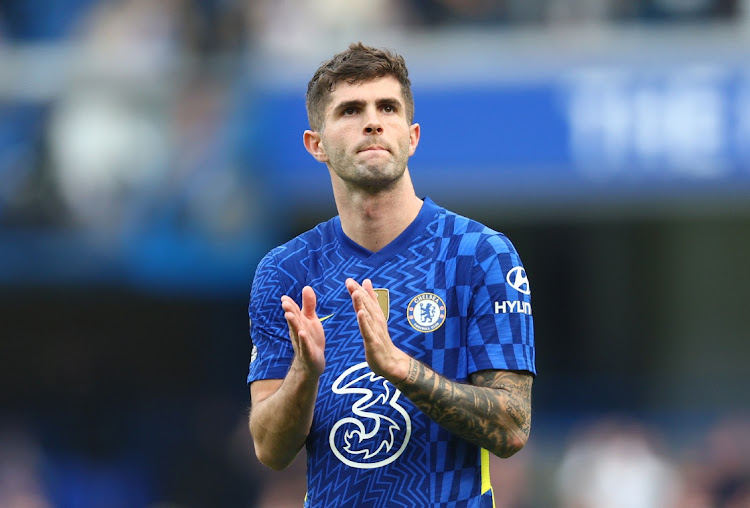 Christian Pulisic of Chelsea applauds the fans after their sides victory during the Premier League match between Chelsea and West Ham United at Stamford Bridge in London, England, April 24 2022. Picture: CLIVE ROSE/GETTY IMAGES

London — Chelsea tightened their grip on third place in the Premier League with a 1-0 victory over 10-man West Ham on Sunday, with Christian Pulisic’s 90th-minute winner at Stamford Bridge making up for his teammate Jorginho’s missed penalty.

Substitute Pulisic arrived in the box at the right time to guide home a superb pass by Marcos Alonso shortly after Jorginho had wasted his chance from the spot, firing straight at West Ham keeper Lukasz Fabianski.

West Ham defender Craig Dawson, one of their best players in a much-changed side, was shown a red card after a check by the video assistant referee (VAR) after a clumsy foul on substitute Romelu Lukaku which resulted in the penalty.

Thomas Tuchel’s side ended a run of two straight defeats at home — against Brentford and Arsenal — but it is their forward line rather than defence that will concern the German manager ahead of their final few matches.

“He [Tuchel] just said to make a difference; to combine and make opportunities. It feels good to be more secure in the top four,” Pulisic, who replaced Timo Werner in the 76th minute, told Sky Sports.

“We needed a win at home and it feels great in front of our fans. We need to finish the season strong ... some good league games and then a final [FA Cup against Liverpool]. I needed to come in and make a difference and show I want to be playing.”

Seventh-placed West Ham made six changes to their starting line-up with an eye on Thursday’s Europa League semifinal first leg against Eintracht Frankfurt, a competition that offers them their best chance of reaching next season’s Champions League.

They looked on course to secure a point after N’Golo Kante’s deflected effort and Trevoh Chalobah’s rocket from distance drew saves from Fabianski, before Werner fired wide from a tight angle in the second half of a game that had few clear chances.

Victory meant Chelsea went five points clear of fourth-placed Arsenal, with a match in hand against Mikel Arteta’s side. They can consolidate their position with a victory over struggling Manchester United on Thursday.

Burnley climbed out of the  relegation zone and pushed Everton into the bottom three after Matej Vydra grabbed the 62nd- minute winner in a tense 1-0 win over Wolverhampton Wanderers at Turf Moor.

The Clarets have now claimed seven points from three games since sacking long-term manager Sean Dyche and move to 31 points from 33 games while Everton, who face Liverpool later on Sunday, have 29 points from 31 games.

A goal in each half from captain James Ward-Prowse helped Southampton to rescue a point at Brighton & Hove Albion with a 2-2 draw.

Brighton made a lightning start and led with two minutes on the clock through Danny Welbeck, who tapped into an empty net after visiting goalkeeper Fraser Forster fumbled Marc Cucurella’s low cross into the box.

With halftime approaching, Brighton’s Leandro Trossard drilled a ball towards Welbeck which was awkwardly prodded home by Southampton defender Mohammed Salisu into his own net, seemingly giving the visitors a mountain to climb.

Ward-Prowse single-handedly dragged Southampton back into the game late in the first half, whipping a trademark free-kick through the Brighton wall and past goalkeeper Robert Sanchez after Cucurella had fouled Nathan Tella.

Oriol Romeu back-heeled a ball into the path of Ward-Prowse about 10 minutes into the second period, and the England midfielder fired straight into the far corner to bring Southampton level.