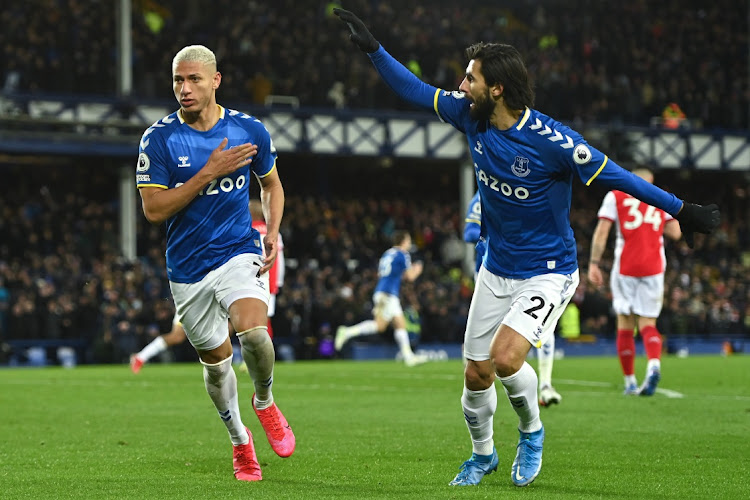 Richarlison (L) of Everton celebrates with teammate Andre Gomes after scoring their side's first goal during the Premier League match between Everton and Arsenal at Goodison Park on December 06 2021 in Liverpool. Picture: GETTY IMAGES/GARETH COPLEY

Liverpool — Everton manager Rafa Benitez heaped praise on his team for their resilience in a comeback 2-1 Premier League win over Arsenal on Monday which gave the Spaniard some breathing space after he came under pressure from a nine-game winless run.

Late goals by Richarlison and Demarai Gray, who struck a stunning stoppage-time winner, saw the home side cancel out Martin Odegaard’s first-half opener for the Gunners.

Richarlison also had two goals ruled out for marginal offsides and while Benitez pondered if the lines used by the VAR officials to assess offside calls “could be thicker”, he was delighted with his side’s comeback.

The result allowed Everton to climb to 12th on 18 points, while Arsenal stay seventh on 23 points from 15 games.

“The reaction of the team to the goals that were disallowed and conceding a goal at the end of the first half, we still scored goals and reacted,” the Spaniard told Sky Sports.

“Every player and fan is expecting that. Everybody is really pleased and hopefully it is the right step forward. Everything is against you but the character they showed today, with the fans behind, they can enjoy that.

“The fans are expecting commitment. You can talk about mistakes and we conceded because we made mistakes against a good team. In terms of commitment the players are there and the fans appreciate that.”

Gray, who was also involved in the equaliser for Richarlison after his shot rebounded off the crossbar for the Brazilian to head home, said his own spectacular winner was his best moment at Everton since he joined from Leicester City in July.

“It was a crazy moment, my best moment here so far,” he said. “As a group we have gone through this bad patch but we have stuck together. With the fans like that, behind us for the whole game, it’s more than deserved.”

Odegaard said Arsenal were disappointed to suffer a third successive league defeat after taking the lead at Goodison Park, albeit against the run of play.

“It’s a hard one to take. I think in general we were not at the level we needed to be at today,” said the Norwegian. “We have to do better when we have that lead. We stopped playing and gave them the game they wanted to play.

“When you’re leading 1-0 you get afraid to lose the win and in my opinion that’s what we did wrong today. You go for the second goal and that was the intention but we didn’t manage to do that on the pitch.”