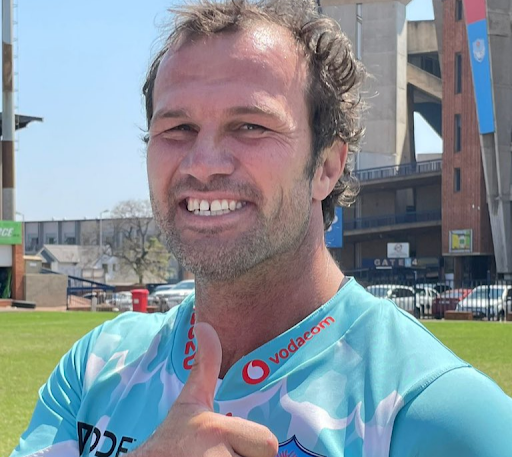 Springbok legend Bismarck du Plessis wants to share his vast knowledge of the game with younger players at the Bulls. Picture: BLUE BULLS/TWITTER

Springbok legend and World Cup-winning hooker Bismarck du Plessis aims to impart his vast knowledge of the game to younger players at the Bulls as they embark on a new era in the United Rugby Championship (URC).

The 37-year-old 2007 World Cup winner, who played 79 Tests for the Boks, was recently recruited by coach Jake White after a successful six-year stint at French club Montpellier.

Du Plessis is part of the 37-man Bulls squad doing duty in the first leg of their URC tour in Europe that starts with a clash against Leinster on Saturday in Dublin before moving to Wales and Scotland.

The Bulls are also scheduled to play Connacht in Cardiff and Edinburgh, and Du Plessis is expected to play a crucial leadership role on their four-week European tour.

“You remember how you were treated as a youngster,” he said from the team’s hotel in Dublin. “My biggest wish is that I can be something for these young players that other players were to me at that age, [that] a player like Johan Ackermann was for me.

“I was 20 and he was 38 and I used to drive into training [for the Sharks] and he would be there already warming up.

“He stayed next to me in Durban in the same flats and he was a big part of my development as a player, and gave me a lot of wisdom. He went through a lot of ups and downs in his career and he gave me a lot of good advice that I took to heart. He was very good to me.

“This is a young team and I can already see from the few practices I’ve had with them that there are players here who have great careers going forward. I think I’d tell those youngsters that you must never forget why you started playing rugby.

“And another thing is for them to understand sacrifice. I had a coach who always told us that whenever you say ‘yes’ to one thing you say ‘no’ to something else. With every ‘yes’ comes a consequence, so make sure the decisions you make are more often right than wrong.”

Du Plessis said he was enjoying some downtime on his farm when White offered him the opportunity to join the Bulls.

Sitting on the tractor

“It still feels a little bit unreal … because in my head I’d said goodbye to rugby. But when Jake phoned me and I was sitting on the tractor on my farm, what he said awakened something in me again.”

Before he took up this challenge, Du Plessis needed advice from a few players who managed to play professional rugby well into their late 30s.

“I spoke to a lot of players. Victor Matfield gave me great advice, so did Johann Muller, and Stefan Terblanche really changed my mind in terms of what he said to me.

“Some of the players I spoke to said they were happy to retire because their bodies couldn’t take it any more.

“It was obviously a difficult decision for me because I gave my heart and soul to the Sharks. But the opportunity was with the Bulls, and the way Jake spoke to me and what he explained to me helped me make that decision.

“My family also played a big role by giving me the support to do something like this. For most of my life rugby always dictated what I did.

“It was quite nice to be able to ask them how they feel and how they see it, and they supported me in this. It’s a new challenge and a great opportunity to be able to do what I love.”

With money scarce, many are getting short term contracts, some of them becoming permanent
Sport
2 years ago
Next Article