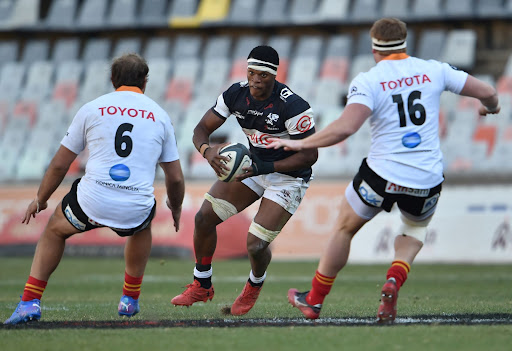 Phepsi Buthelezi is set to captain the Sharks for their four matches in Ireland, Scotland and Wales in the United Rugby Championship. Picture: GALLO IMAGES/JOHAN PRETORIUS

There has been frenzied activity in the transfer market with the Bulls, Sharks, Lions and Stormers beefing up their squads for the new United Rugby Championship (URC) which kicks off on Friday.

Squad depth will be critical in the months ahead as SA’s top franchises adjust to a gruelling schedule and European weather conditions that will test their endurance. In the opening rounds, SA teams will be missing their international players still participating in the Rugby Championship in Australia.

It is Saturday’s clash between the Bulls and Leinster at the Aviva Stadium in Dublin that will grab the most attention when the leading teams of the northern and southern hemispheres collide.

The action kicks off on Friday when the Lions play Zebre, before Saturday’s schedule in which the Stormers face Benetton and the Sharks take on Munster.

Bulls director of rugby Jake White has announced a 37-man squad for the European trip which includes games against Leinster, Connacht, Cardiff and Edinburgh.

Springbok hooker Bismarck du Plessis, who joined the side earlier last week, is a notable inclusion while flyhalf/centre Johan Goosen, who missed the Currie Cup final, returns. Also in the travelling party, after a full recovery from injury, are scrumhalf Embrose Papier and lock Sintu Manjezi.

“We have a long and tough URC season ahead, and it will be important how we manage our squad going forward,”  White said.

Meanwhile, Salmaan Moerat and Ernst van Rhyn have been appointed joint captains of the Stormers for their URC tour with regular captain Steven Kitshoff away on Springbok duty. The Stormers take on Benetton Treviso, Munster, Edinburgh and the Dragons on their tour.

Stormers head coach John Dobson said Moerat and Van Rhyn are both natural leaders who will be able to get the best out of the group on tour. “Salmaan and Ernst are both very comfortable in the captaincy role, having both done the job for just about every team they have played in, so it made sense to let them share the workload on this tour,” he said.

“We know this will be a challenging tour, but it is something we as a group are embracing as we embark on a new journey in the United Rugby Championship. We have brought some quality players into the mix and they are all keen to make their mark in the Stormers jersey,” he said.

In the absence of Bok Lukhanyo Am, Phepsi Buthelezi will captain the Sharks  for their four matches in Ireland, Scotland and Wales. Ruan Pienaar and Tian Meyer are included in the squad, having signed loan agreements with the Sharks from the Cheetahs, and there is a welcome return from injury for the lock pairing of Ruben van Heerden and Hyron Andrews.

The Lions have named  a 33-man touring squad ahead of their opening game against Zebre on Friday. Head coach Ivan van Rooyen said the travelling group has what it takes to negotiate the unfamiliar conditions.

SA face a huge challenge, with New Zealand  undefeated in the Rugby Championship
Sport
3 weeks ago