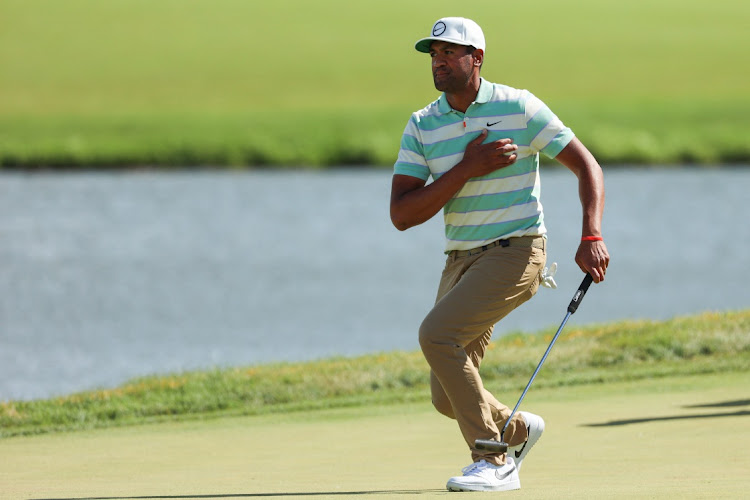 Tony Finau reacts after saving par on the 17th hole during the final round of the 3M Open golf tournament on July 24 2022. Picture: Matt Krohn-USA TODAY Sports

Tony Finau rolled in four birdies on the back nine, including three in a row, to break away from the pack on Sunday and win the 3M Open at TPC Twin Cities in Blaine, Minnesota.

Scott Piercy, who held at least a share of the lead after each of the first three rounds and a four-stroke lead entering Sunday, stumbled to a 5-over 76. He finished in a three-way tie for fourth.

That left the door wide open for Finau to collect his third PGA Tour victory.

“I was playing great and every time I looked up, it seemed like I was four, five shots back really all day,” Finau said. “I really got things going in the middle of our back nine.”

Finau was 1 under through 10 holes before making birdies at 11, 14, 15 and 16. He found himself in the lead after he birdied the 14th and Piercy, playing one group behind, made triple bogey at the same hole.

When Finau sank a downhill, right-to-left birdie putt from 31 feet away at No 15, he’d gone from behind by three shots to ahead by two in two holes.

“Once I took control of the golf tournament, it was a whole different mindset trying to seal the deal,” Finau said.

Finau nearly found water off the tee at the par-3 17th but narrowly missed a chip-in birdie and saved par. His tee shot at No 18 did find the water and he settled for bogey, but by then he was out of reach.

Im played a clean round of three birdies and no bogeys to grab a share of second. Conversely, Grillo had five birdies offset by two bogeys and a triple bogey at the par-4 seventh, where he had to take a penalty stroke for a drop in the rough behind the green and still couldn’t get out with his fourth shot.

“Tony pressed really hard on the gas and he just made it very hard for everybody,” Grillo said. “You know, I gave myself a chance and he just got away and I didn’t — I left every putt short.”

James Hahn tied for fourth at 13 under with Tom Hoge (70) and Piercy.

Hahn’s 6-under 65 featured a hole-out eagle from the fairway at the par-5 12th hole. He later had three straight birdies at 14-16.

“Magical, that's what it felt like,” Hahn said. “Yeah, I was just playing really smart, hit a lot of good shots on the front nine. Only came away with two birdies, but I felt like I was hitting it really good. Then the chip-in eagle on 12, that started everything.”

Piercy, 43, was hunting for his fifth career win on tour and his first since 2018. He birdied two of his first six holes but went bogey-bogey to finish the front nine. A disastrous back nine included four bogeys and a triple bogey at the par-4 14th, where he drove into a bunker, couldn’t get out on his second shot and sent his third shot from sand to water.