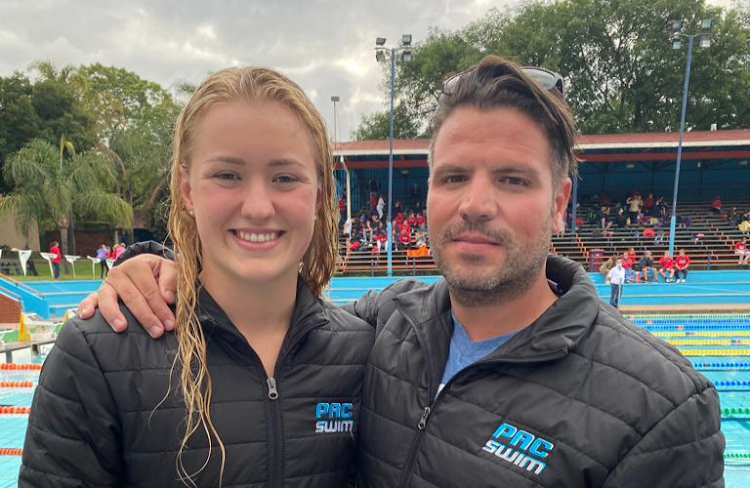 But all too often it’s that coach-athlete bond that goes unnoticed. Take Pretoria’s Lara van Niekerk and Eugene da Ponte.

It’s not unreasonable to say that before SA nationals in Gqeberha earlier in April, outside swimming circles, the broader SA sporting public would not know who the duo were. That is despite Da Ponte having just coached Van Niekerk to breaststroke titles over 50m and 100m, and beating Tokyo Olympics 200m gold medallist and 100m silver medallist Tatjana Schoenmaker on both occasions.

Van Niekerk’s name is now quite rightly in the limelight. But it takes two to tango — enter Da Ponte, who himself has national colours for swimming and went on to captain the University of Toledo men’s team in the US (2000-2001) where he began his coaching career.

On his return home he coached briefly at Pretoria Aquatic Club (PAC) before diving into the corporate world for 10 years or so.

“The corporate world gave me a solid work ethic and since getting back into coaching I’ve been fortunate enough to work with some of the best up-and-coming stars in junior swimming in SA over the past decade,” says Da Ponte. “I take pride in knowing that 85% of the swimmers involved in my programme, were novices/beginners who started their swimming career under my tutelage.”

At 42, Da Ponte could himself be termed junior when it comes to swimming coaches and he and Van Niekerk’s journey began when she was only eight years old.

It was something of a family production line, as he explains: “Lara’s two older siblings, Joa and Zander, both walked onto the pool deck I shared with my brother at the time, in 2010. Both were talented, but very raw, never having had formal club coaching. Lara used to sit in the juice-bar with her mom during her siblings’ training sessions, and stand on the couch watching the swimming.

“She became more interested in what was going on in the pool, and was eventually brave enough to come and stand near the pool to watch. After getting used to me, she started asking questions while watching, and eventually one afternoon came up to me during a training session and blurted out: ‘So when are you going to tell my mom that I must also start swimming’?”

Reflecting on the mature way Van Niekerk reacted to her latest triumphs and took it all in her stride Da Ponte says his charge is a natural born “chaser”.

“She’s had to compete against and chase swimmers, faster and older than her for her whole career and it’s never fazed her. That’s a major reason why she’s where she is today and why she’s so comfortable punching above her weight.”

Da Ponte takes a refreshingly holistic approach to coaching and is all too aware of the roles that swimming parents play or don’t play.

“In Lara’s case, I’ve been very lucky, I had to talk to her parents years ago, with her older sister, but they’ve since realised the relationship between swimmer and coach is an important aspect of performance and they need to allow us to bump heads at times so we can form a level of trust and understanding over the years.

“Through trust and understanding, and being involved in their life outside the pool, we as coaches then know how to handle the swimmers. Some days they have a good day and we can really push them. Other days they walk onto the pool deck and you can tell just by their facial expression that they’ve had a hard day.

“And then you don’t push them, but instead support them, and if necessary talk to them and try to assist them in whatever way you can.”

As for Van Niekerk it’s clear that she and her coach have an incredible connection. “We have such a great understanding of each other,” she says. “He’s the most supportive person, which to me is so important. I haven’t had many downs in my career but I remember so well that at 2019 Junior World champs, my first international gala, he reminded me that it was my first time out of SA  — I can’t expect to be amazing.”

She’s got a wise head on her young shoulders, and has her own “mental coach” in Meta4mance’s Emile de Bruin. “He’s also amazing and has helped so much in giving me the right tools to manage stress [and my time!] and teaching me about values and that I can only control what I’m doing myself.”

A huge fan of world 50/100m breaststroke world record holder Adam Peaty, the youngster is reading his book The Gladiator Mindset. “I’m learning so much from it — he’s a huge role model of mine.”

Has her life changed since the spotlight fell on her at nationals? “I really don’t think so. I’m pretty grounded although I did have a very special moment when a little girl asked me to pose for a photo and sign her swimming bag. That was amazing — I actually ‘fangirled’ more than the little girl,” she laughs.

And it’s great to see that athlete and coach both appreciate the funny side of life.

“I’ll never forget one year we had a gala at NTS champs in December. We arrived for evening finals, all of us stressed, and Eugene suddenly decided to start ballet-dancing. He was being so funny and goofy, we all just laughed and laughed and ended up swimming so fast in the finals — because we were so relaxed!”

Whether it’s the Tango or Ballet, this coach/athlete duo definitely look to be Quickstepping it to more success sooner rather than later.