Spaniard who has adopted SA gets a special victory 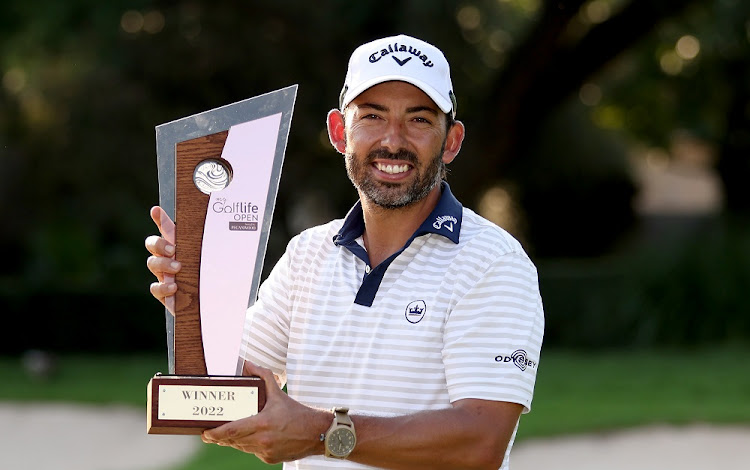 Pablo Larrazabal of Spain celebrates with the winners trophy after his victory on the second play-off hole during the final round of the MyGolfLife Open hosted by Pecanwood at Pecanwood Golf & Country Club in Hartbeespoort, March 13, 2022. Picture: WARREN LITTLE/GETTY IMAGES

When he first walked a fairway in SA in December 2007, Pablo Larrazábal says he knew “there is something special in this country”.

On Sunday, the Spanish golfer who South Africans love as one of their own produced something equally special in a three-man playoff to win the MyGolfLife Open hosted by Pecanwood.

Larrazabal closed with a 67 to finish regulation play tied for the lead on 22 under par with England’s Jordan Smith and fellow Spaniard Adri Arnaus. Playing the 18th again in the playoff, Arnaus fell out as the other two made birdies. And then playing the 18th again, Larrazabal holed a five-footer for birdie and the win as Smith bogeyed the hole.

It was his sixth DP World Tour victory. He has won two of those six titles in SA, including the 2019 Alfred Dunhill Championship.

“I knew from the moment I first came here that there is something very special about this country, and it’s the people,” said an emotional Larrazabal. “What a day. I felt great this morning. It was one of those days where you just feel great and you know you’re going to have a chance. I started fast to get into the lead very quick.”

Larrazabal was one-stroke clear before a bogey at the 17th brought him into that three-way tie for the lead.

“I had that bogey on 17 which I wasn’t expecting. But then in the playoff, when Adri hit it so close on the first playoff hole, I knew we had to attack.”

It was a playoff that brought tremendous cheers from the Pecanwood faithful for one of the most popular European golfers to visit these fairways.

“This wins means a lot. I’ve been working so hard and I’m very happy to get it done. I love this place. I love good golf courses and nature, and SA has it all. The crowds here have been so special to me all these years.”

Smith, who signed for a closing 65, and Arnaus, who posted a final round of 67, shared second place.

George Coetzee finished as the leading South African with a strong final-round surge of 64 that earned him fourth place on 21 under par.

The Sunshine Tour and DP World Tour moves to Johannesburg this week for the Steyn City Championship at The Club at Steyn City.