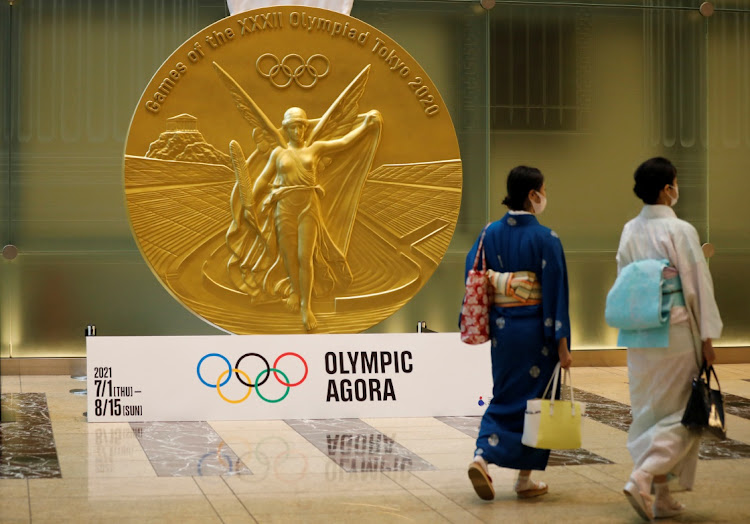 An oversized replica of the gold medal, at Nihonbashi Mitsui Tower in Tokyo, that will be awarded to winners at the Tokyo 2020 Olympic Games. Picture: REUTERS/KIM KYUNG-HOON

Tokyo — A coronavirus cluster has been detected at a Japanese hotel where dozens of Brazil’s Olympic team are staying, officials said on Wednesday, raising concerns of Covid-19 infections spreading between locals and Olympic staff and athletes.

Seven staff at the hotel in the city of Hamamatsu, southwest of Tokyo, have tested positive, said a city official, but the 31 members of the Brazilian Olympic delegation, which includes judo athletes, are in a “bubble” at the hotel separated from other guests and have not been infected.

The cases were detected during a routine screening process required before the staff started work, said city official Yoshinobu Sawada, adding the unidentified hotel was now considered a Covid-19 cluster.

Medical experts are worried that Olympics “bubbles”, imposed by Tokyo 2020 Olympic officials in an effort to ensure a Covid-free Games, might not be completely tight as the movement of staff servicing the Games can create opportunities for infections.

The pandemic-hit Olympics, due to start in nine days, have lost public support amid lingering concerns about infection risks and a state of emergency being declared in Tokyo, despite organisers promising strict coronavirus measures.

Many Olympic delegations are already in Japan ahead of the Games, and some of them are training in local towns. Several athletes have tested positive on arrival.

Members of the SA rugby team are in isolation after arriving in Japan, as they are believed to be close contacts with a case on their flight, according to officials at Kagoshima, a host town for the team.

The 21 members of the SA squad were due to stay in the city from Wednesday, but that plan has been halted until further advice from health authorities, said city official Tsuyoshi Kajihara.

Global interest in the Tokyo Olympics is muted, an Ipsos poll of 28 countries shows, amid concerns about Covid-19 in Japan and the withdrawal of high-profile athletes, with the host country among the most indifferent.

The poll (https://www.ipsos.com/en-us/news-polls/tokyo-olympics-draw-muted-interest) released on Tuesday found a global average of 46% interest in the Games, but excitement varied across markets, with less than 35% in Japan.

Spectators have been barred from attending all Olympic events in Tokyo and surrounding regions and Japanese officials are asking residents to watch the Games on TV to keep the movement of people to a minimum.

Only 22% of Japanese say the Games should go ahead, the Ipsos survey shows.

Tokyo governor Yuriko Koike said a sufficient number of hospitals combined with a speed-up in the Covid-19 vaccination rollout among the elderly meant the city will be able to hold “safe and secure” Olympics.

Australia will be bringing its biggest team ever to Tokyo 2020, the head of Australia’s national committee said on Wednesday.

Chef de mission Ian Chesterman said he was very comfortable because almost all the athletes were vaccinated.

But a number of global star players are skipping the Games. Former world number one golfer Adam Scott said he questioned whether holding the Tokyo Olympics was a “responsible decision”, noting the fear among Japanese as the country battles a resurgence of coronavirus infections.

Scott said earlier that he would not play at Tokyo.

Switzerland’s Roger Federer became the latest big name in tennis to withdraw after the 20-times Grand Slam champion said on Tuesday that he had picked up a knee injury during the grasscourt season.

The Games, postponed from last year because of the pandemic, run from July 23 to Aug. 8. Tokyo’s state of emergency, the capital’s fourth, lasts until Aug. 22, shortly before the Paralympics are due to begin.

Lowry, Oosthuizen and Rahm together in first round of the Open

Lowry, Oosthuizen and Rahm together in first round of the Open