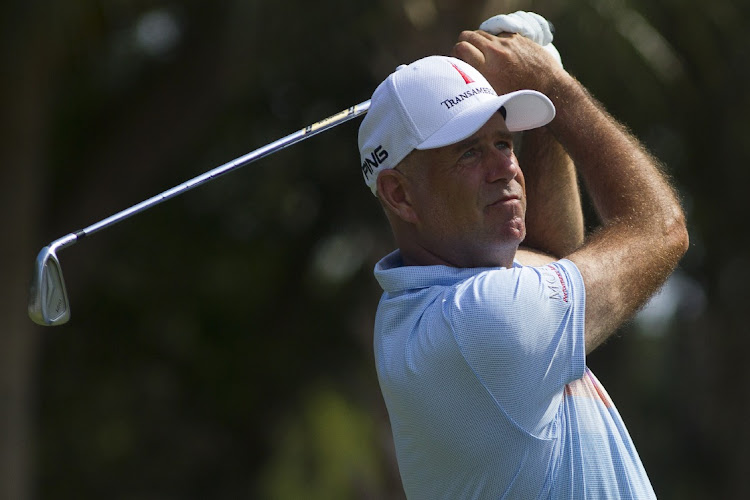 Stewart Cink tees off on the ninth hole during the final round of the RBC Heritage golf tournament in Hilton Head, South Carolina, the US, Apr 18 2021. Picture: JOSHUA KELLY/USA TODAY SPORTS

Cink, 47, carded two birdies and one bogey over his final-round in Hilton Head, South Carolina for a 1-under 70 and finished at 19-under 265 total — four shots ahead of Argentina’s Emiliano Grillo and Harold Varner III, who shot 66 on Sunday for his career-best PGA Tour finish.

The win marked Cink’s second victory this season — and second with son Reagan on the bag. The two paired up when Cink won the Safeway Open in September.

“I don’t know if I have words,” said Cink, whose entire family was on hand for the win. “It just keeps getting better. Winning with Reagan caddying back in the fall was amazing, but it was just so great to have the whole family here. It means so much to me. It’s just really been a blast this week.”

Cink, a 25-year tour veteran, came in confident after finishing tied for 12th at last week’s Masters and a top-20 finish in his previous event, the Honda Classic.

After opening with consecutive rounds of 63, Cink jumped out to a five-shot lead going into the weekend. He shot 69 on Saturday to maintain that margin and set the tournament’s 54-hole scoring record previously held by Justin Leonard (16 under in 2002).

“I knew if I played solid today that it would be really hard to get a lot closer,” said Cink. “And I did, I played really solid; and it wasn’t spectacular yesterday or today, but today I was in play all day long. I did the job that I needed to do today to come away with a little bit of a cushion on the last few holes, which is such a pleasure to experience.

“It doesn’t happen to many people that many times in their career, but to walk down that fairway with a big lead and see that ball come up on dry land here on the 18th fringe with Reagan on the bag, and I knew [son] Connor and [wife] Lisa were out there, it’s almost beyond words.”

Varner, who has made 15 cuts in 15 starts this season, posted four sub-70 rounds in Hilton Head and had a near flawless final round. After carding a bogey at the first, he rebounded with three birdies on the front and three on the back — including a final birdie at 18.

“Just enjoying it. I really love playing golf. I always have, always will, whether I play out here or not. Yeah, it was good. And the birdie at the last was awesome.”

Rounding out the top five and tied for fourth place at 13 under were Maverick McNealy (67), Canadian Corey Connors (68) and England’s Matthew Fitzpatrick (68). Chris Kirk (67) and Collin Morikawa (72) finished T-7 at 12 under.

Many of them were late bloomers and near champs, and a number of women swung like the best of them
Sport
9 months ago