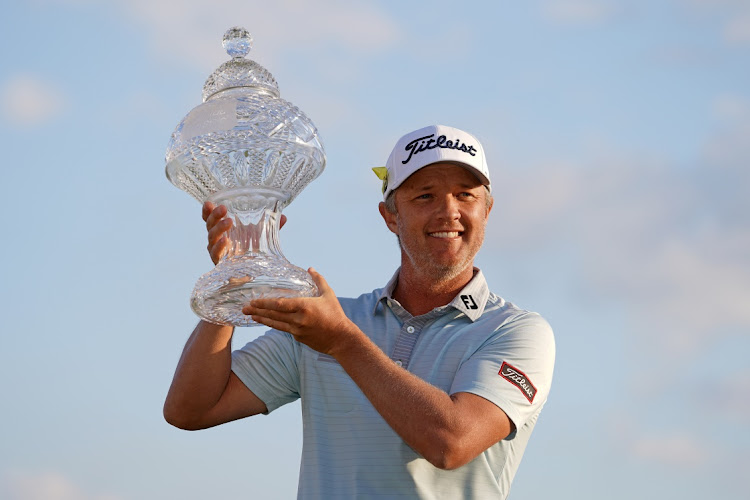 Matt Jones celebrates with the trophy after winning the Honda Classic golf tournament at the PGA National in Florida, the US, March 21 2021. Picture: JASEN VINLOVE/USA TODAY SPORT

Melbourne — Honda Classic winner Matt Jones had to wait seven years and the arrival of middle age to capture his second PGA Tour title, but his coach Gary Barter is confident the Australian’s best golf is still ahead of him.

Jones’s five-stroke win at the PGA National in Florida on Sunday booked the 40-year-old a ticket to April’s Masters, the first Major of the year. Jones was in touch with Sydney-based coach Barter before the start of the final round as he looked to seal his first Tour win since the 2014 Houston Open.

Barter said Jones is primed for an assault on Augusta in his second appearance, seven years after being cut from the 2014 tournament won by Bubba Watson.

“What he did this week, winning that championship at that golf course on that stage by five shots, it’s vindicated what people in his camp think of him as a player,” Barter told Reuters. “There’s a lot of one-time [Tour] winners, but to win twice, there’s a bit more respect among [them] in the clubhouse.

“I always felt he had the game to win a Major, I said that many years ago. I think he’s got that game where he can play strong golf courses and play to win.

“When the winning score is between eight and 14-under, he’s really good around those tracks, like a lot of Aussies because we play on pretty tough courses growing up.”

Sydney man Jones left Australia as a teenager to play college golf in Arizona and has been based in Scottsdale since joining the Tour in 2007. It took seven years of toil and a pair of miraculous shots for his first win at Houston. He sank a 45-foot putt on the 18th hole to reach a play-off against Matt Kuchar, then chipped in for birdie from 42 yards on the same hole to beat the American.

Jones held off Jordan Speith and countryman Adam Scott to win his home Australian Open the following year but was never able to kick on in the US until Sunday. A top-shelf ball-striker, it was Jones’ putting that held him back through some lean years.

“Anyone that doesn’t putt so well on the PGA Tour just gets eaten alive,” Barter said. “This year and last year his putting stats have really improved. Technically, we changed a few things with his putting, more about imparting on the collision with the ball.”

Jones turned 40 during the Tour’s suspension in 2020 due to the Covid-19 pandemic and admitted to having frank conversations with his family about his golfing future. A chat with fellow 40-year-old Scott, the first Australian to win the Masters in 2013, helped to renew his determination.

“We’ve got five really good, hard years ahead of us, where we think we can do something special and I think this sets me on a path where I could,” Jones said. “I’ve probably underachieved, in my opinion, for what I could have done. But I’ve got some time left.

“I feel like my game is getting better as I get older. I’m hitting it better, I’m hitting it longer, so there’s nothing to say that that won’t happen.”

Winner, Jake Roos and Daniel van Tonder all finished regulation play tied for the lead on 25 under
Sport
1 month ago

Strangely, the sport has benefitted from Covid as it offers conditions ideal to mitigate the pandemic
Sport
1 month ago
Next Article