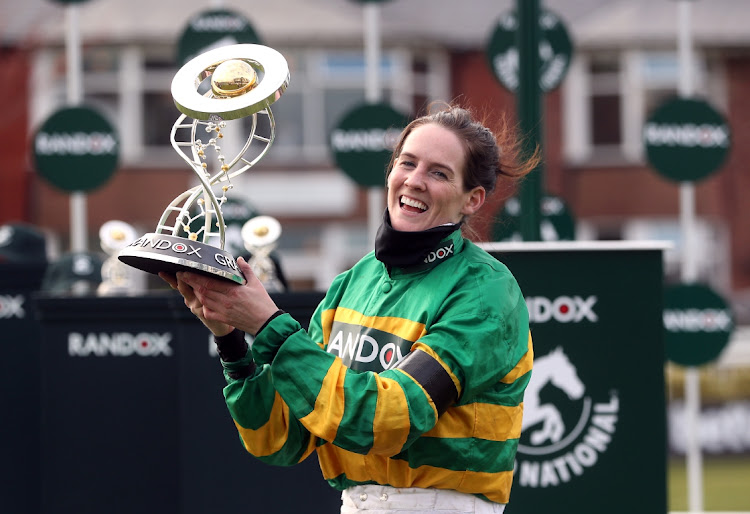 “I don’t feel male or female right now. I don’t even feel human!”

These were the words of 31-year-old Rachael Blackmore after becoming the first female jockey to win the Grand National at Aintree on Saturday.

Riding 11-1 chance Minella Times for trainer Henry De Bromhead, Blackmore added the most important chapter to her 2021 success story after six winners at the Cheltenham festival in March.

“He gave me an absolutely sensational spin — I’m so lucky to be riding him. He was incredible and jumped beautifully and I was trying to wait for as long as I could,” Blackmore told reporters.

One UK Sunday newspaper headlined their national story “New Wonder Woman” in reference to “Wonder Woman 1984”, an American superhero film based on the DC Comics character.

It is quite possible that Blackmore has wrapped up the Sportsperson-of-the-Year award with more than eight months of 2021 still remaining.

Most pundits were in the corner of the favourite, Cloth Cap, trained by Jonjo O’Neill, winner of the  2010 race with Don’t Push It. However, the market leader was suddenly pulled up on the final circuit by jockey Tom Scudamore.

“Tom [Scudamore] said he was going along grand and then he just started gurgling so correctly pulled him up. We’ll get him checked out,” said O’Neill.

Bookies were pleased the favourite did not win, but were also surprised there was not more support for Blackmore’s mount. Paul Binfield of Paddy Power said: “The anticipated huge gamble and payout on Minella Times that we had really feared didn’t materialise and the race ended in a score draw between punters and bookies.”

It was hoped that all 40 runners would return from the gruelling race safely, but that did not happen. The outsider The Long Mile suffered a fatal injury while running on the flat between obstacles.

Jockey Bryony Frost was taken to hospital with concussion after being unseated on Yala Enki at the 20th fence. Harry Cobden also took a heavy fall from Lucky One in the Betway Mersey Novices Hurdle.

It will have been a huge thrill for County Tipperary-born Blackmore to receive the winner’s trophy from former champion Sir Anthony McCoy.

“It’s amazing for her and for racing. She’s got it all. She’s brought riding to a new level in terms of how far a female jockey can go. The hardest thing for a jump jockey is dealing with the physical and mental demands and she’s handled both,” said McCoy.

Katie Walsh, who held the record of being the highest-placed female when third on Seabass in 2012, added her plaudits. “Rachael is an inspiration to males and females alike. She’s a phenomenal woman who is great for racing and sport. She has worked hard and is tactically aware. She’s a true professional and deserves this.”

The only disappointment was that — because of the pandemic — Saturday’s race was run behind closed doors. When Charlotte Brew completed the course in 1982, she was roundly cheered by the large crowd. There was no such reception for Blackmore.

Meeting to honour victims of air disaster 33 years ago

Lyle Hewitson on course to improve on his best season total

Betting bonanza assured but no fans at Grand National

Get ready for the ‘Rumble at Turffontein’ on May 1

Moment of truth for fans of Malmoos and War Of Athena

Khumalo can bring some early Easter cheer to punters

Queen Supreme off on four-month journey to San Diego

Moment of truth for fans of Malmoos and War Of Athena

Khumalo can bring some early Easter cheer to punters

Queen Supreme off on four-month journey to San Diego