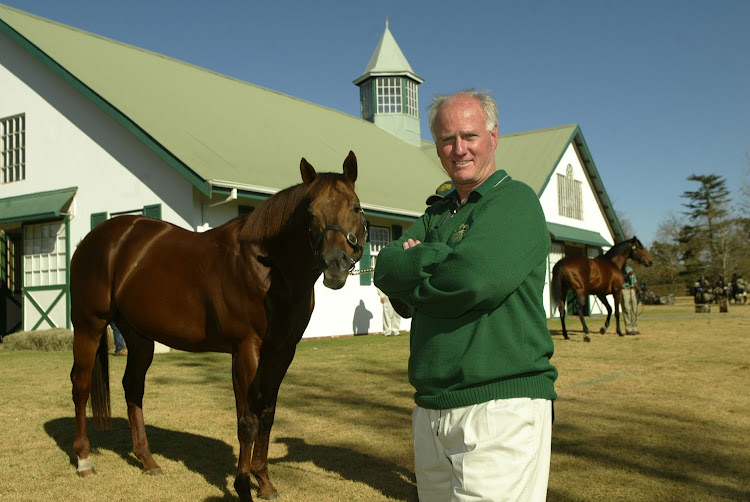 Turn back the clock a few years with no virus and a less dire economic situation and one man would have been at the centre of the action at an important race meeting like last Saturday’s Classic day at Turffontein.

That man would have been 10-time champion breeder Mick Goss.

After two Summerhill stud graduates, War Of Athena and MK’s Pride, had raced to impressive victories in the Wilgerbosdrift SA Fillies Classic and Hawaii Stakes, Goss would have been giving interviews left, right and centre (very much his forte) extolling the merits of the two horses.

Unfortunately, the reality of the economic downturn caught up with a stud that started in 1979 and — in December 2019 — Goss sold his farm to Henning Pretorius. The last progeny bred at Summerhill was sold online in May 2020.

It was a distressing period for Goss, who said at the time: “Parting with the animals has been a very emotional thing. It’s like giving away your children.” He added that his affinity for horses is “a disease” that has been in his family’s bloodline for many generations.

Goss has every reason to be proud of War Of Athena. The Paul Matchett inmate boasts seven wins from 13 starts and more than R1m in stake earnings, and the filly is on course to win the Triple Tiara.

Willow Magic has also made a bright start to his career and his son, MK’s Pride, beat War Of Athena in the Ready-To-Run Cup last October. He is proving a money-spinner for his owner, Koos Nkale.

Another Summerhill-bred three-year-old, Bartholdi, will bid to notch the third win of his career when he runs in the sixth race at the Vaal on Tuesday. He is also a son of Act Of War and is looking a bargain buy at R180,000.

Bartholdi is named after the French sculptor Frederic Bartholdi (1834-1904), famed as the designer of the Statue Of Liberty.

Football is forever reporting the transfer of players, but Bartholdi has also been the subject of transfer, moving from Gary Alexander’s stable at Turffontein to Michael and Adam Azzie at Randjesfontein.

Bartholdi makes his debut for the Azzie team on Tuesday and the three-year-old’s rider, S’manga Khumalo, will be expecting challenges from Piere Strydom on Johnny Hero and Warren Kennedy on Namib Desert.

Tyrone Zackey does well with his small string of horses and Johnny Hero has played his part for the stable with three wins from 14 starts. The gelding was returning from a long break when fourth behind Putontheredlight at the Vaal last month.

Considering his pedigree, it is a surprise Namib Desert made only R200,000 as a yearling, but the Silvano gelding has posted a win and two seconds from four outings. One of those seconds was behind Bartholdi, and the pair meet again on the same terms.

This season’s leading jockey, Lyle Hewitson, was winnerless at Turffontein last Saturday, but he should be back among the winners at Tuesday’s meeting. His promising mounts include Siren Of Greece (first race), Cash Time (third), Upcloseandpersonal (fifth) and Ice Lord in the final leg of the Pick 6.

Ice Lord, a son of Skitt Skizzle bred at Bosworth Farm Stud, is bidding to make it three wins in his last four starts. His most serious rival could be St John Gray’s three-year-old, Romeo’s Magic.