The Spaniard says he stayed positive and was fighting throughout the match, but it was not enough 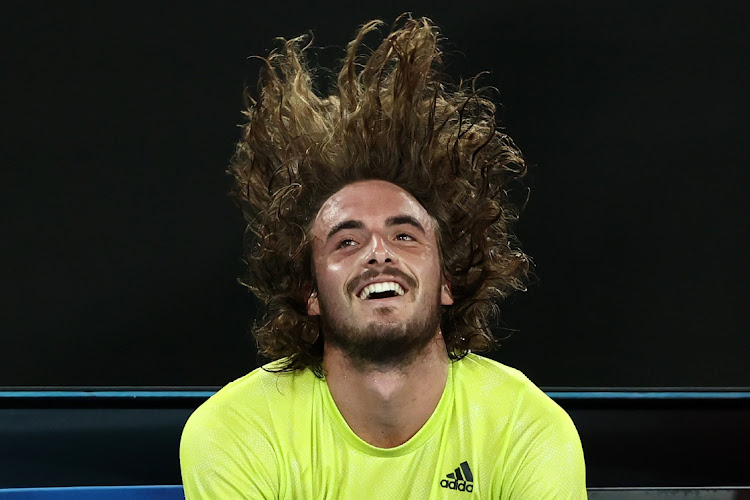 Stefanos Tsitsipas of Greece celebrates victory in his men’s singles quarterfinals match against Rafael Nadal of Spain during day 10 of the 2021 Australian Open at Melbourne Park on February 17, 2021 in Melbourne, Australia. Picture: GETTY IMAGES/CAMERON SPENCER

Melbourne — Rafa Nadal’s bid for a record 21st Grand Slam title came crashing to a halt at the Australian Open on Wednesday as Stefanos Tsitsipas rose up to topple the Spaniard 3-6 2-6 7-6(4) 6-4 7-5 and reach the semifinals.

World No 2 Nadal had not lost a set coming into the evening clash at Rod Laver Arena and was locked on target for the last four at Melbourne Park after roaring to a two-set lead over the listless Greek.

The match turned on its head when Nadal wavered in a messy third set tiebreak, and a rejuvenated Tsitsipas rallied brilliantly to take the match into a decider. Capturing Nadal’s serve at 5-5 in the fifth, Tsitsipas saw two match points slip through his fingers on serve but he kept his head and fired a scintillating backhand winner down the line on the third to claim one of his finest career victories.

“Of course [I’m] sad. I lost a match in quarterfinals of an event that means a lot to me,” Nadal told reporters. “I tried my best in every single moment … I think I stayed positive all the time during the match, fighting, and it was not enough. Sometimes it’s enough, today was not enough.”

Fifth seed Tsitsipas booked his second Australian Open semifinal and will meet Russian juggernaut Daniil Medvedev for a place in the decider.

“I fly like a little bird and everything was working for me,” the shaggy-haired 22-year-old said. “I have no words to describe what just happened on court. My tennis speaks out for itself. It’s an unbelievable feeling to be able to fight on such level, just to be able to leave my all out on court.

“I started very nervous but I don’t know what happened after the third set.”

Tsitsipas avenged his harrowing straight-sets defeat by Nadal in the 2019 semifinals, when he was left shell-shocked by the Spaniard’s complete dominance. Yet for all but three sets, Nadal appeared set to reopen those old wounds.

Tsitsipas sleep-walked through the match before he knuckled down on serve in the third set. He perked up visibly after battling to a 5-4 lead but Nadal remained impenetrable on serve. It took the Spaniard to open the door with a pair of bungled overhead smashes, the second floating long from the baseline to give Tsitsipas a 5-3 lead in the tiebreak.

Revitalised, the Greek pounded Nadal’s backhand into submission and rushed in to thump a volley into an open court to raise three set points. Nadal cancelled one of them with his own net-rush but finally relented after a baseline skirmish and retired to his chair fuming.

Tsitsipas was transformed and soon had Nadal clinging desperately on serve. Nadal fended off break points at 0-0 and 2-2 but finally faltered at 4-4 in the fourth set before gifting it to the Greek with a slew of unforced errors.

The fifth followed the same formula, only with Nadal crumbling on serve at 5-5 after a wild forehand into the tramlines. The stadium was empty barring a few coaches, officials and ball kids, but tension reached boiling point as Tsitsipas butchered a forehand on match point.

Nadal launched a ferocious forehand return to cancel a second match point but the Spaniard’s volleying let him down again as he swooped in to hammer straight into the net. Tsitsipas made no mistake on his third chance to seal it, blasting a winning backhand that left Nadal’s record bid in tatters.