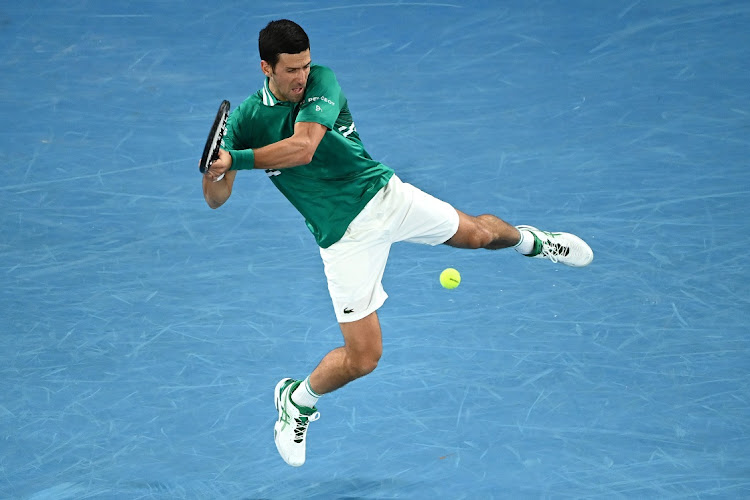 Novak Djokovic of Serbia plays a backhand in his Men's Singles first round match against Jeremy Chardy of France during day one of the 2021 Australian Open at Melbourne Park on February 8 2021 in Melbourne, Australia. Picture: QUINN ROONEY

Melbourne — Novak Djokovic got back to doing what he does best on Monday when he steamrollered Frenchman Jeremy Chardy 6-3 6-1 6-2 on Rod Laver Arena in the opening round of the Australian Open.

Having come through two weeks of quarantine in Adelaide and a brief but damaging spat with his hosts about the strict isolation conditions placed on competitors in Melbourne, the world No 1 let his tennis do the talking as he eased to a 297th Grand Slam victory.

Djokovic has won eight of his 17 Major titles on Melbourne Park’s main showcourt and, even with a smaller crowd than usual, the Serbian looked much at home on the distinctive blue surface.

“There’s an ongoing love affair with me and this court,” he said to cheers from the fans. “I’ve been lucky to have so much success on this court and hopefully it will continue for many years. It makes my heart full to see so many people in the stadium. This is the most people I’ve seen on a tennis court in 12 months. Thank you.”

Chardy had never taken a set off his opponent in 13 previous matches and with Djokovic landing three-quarters of his first serves, the Frenchman was unable to muster a single break point. With Djokovic finding the corners with his ranging strokes to rattle up 41 winners, Chardy’s small victories were the occasions when he battled back to hold his serve.

Djokovic brought a definitive end to the one-sided contest with back-to-back aces after 91 minutes and will next play US world No 64 Frances Tiafoe in the second round.

“Just overall I think every shot that I executed tonight was really good and on a high level. I’m pleased with the way I opened up the Australian Open.”

Nick Kyrgios did his best to create his own atmosphere in a subdued John Cain Arena as he cruised into the second round with a 6-4 6-4 6-4 victory over qualifier Frederico Ferreira Silva.

The Australian can usually expect a febrile atmosphere when he plays on his favourite court, but a local coronavirus outbreak and unseasonably cold weather kept many punters away. Those who did turn up were treated to vintage Kyrgios moments — a racket thrown across the court, a few choice words towards his box and a few more at the umpire as well as a trademark “tweener”.

“Honestly it was pretty average. I haven’t played a Grand Slam match in over a year. I was nervous walking out here and I knew I wouldn’t be able to play my best game,” Kyrgios said after the match.

Canadian 11th seed Denis Shapovalov outlasted Italian Jannik Sinner 3-6 6-3 6-2 4-6 6-4 in an enthralling battle of “Next Gen” stars to move into the second round. In the final clash on Margaret Court Arena, the 21-year-old Shapovalov and Sinner, 19, put on a brilliant display of clean hitting and athleticism in their first career meeting.

“Jannik’s such a great opponent. He’s so talented, such a great guy, so I’m really happy that he’s been doing well,” Shapovalov said in his on-court interview. “I’m happy to get the win. Of course, I knew it’s going to be a tough match.”