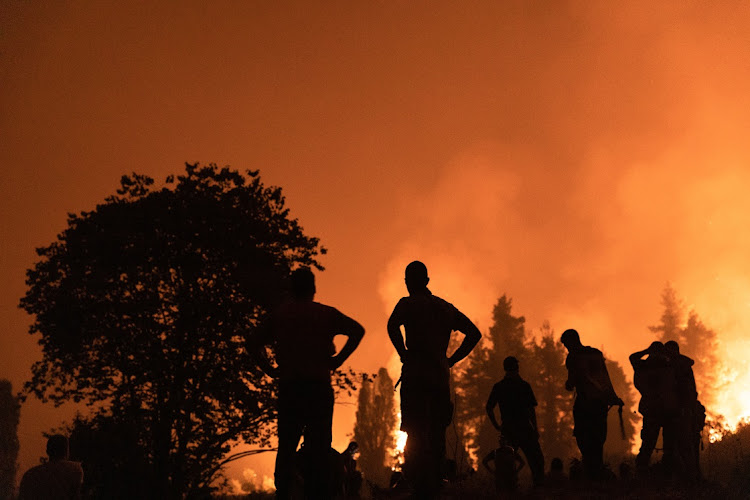 Locals watch the wildfire outside the village of Kamatriades, on Evia island, Greece, on Monday, August 9 2021. Picture: BLOOMBERG/KONSTANTINOS TSAKALIDIS

For over 30 years the Intergovernmental Panel on Climate Change (IPCC) has warned the world of the dangers of global warming. Though the world heard, it did not act. Now a groundbreaking new IPCC report, deemed a “code red for humanity”, shows that our inaction is bringing us ever closer to an apocalyptic world.

In the past five years we have seen that no part of the globe has been spared. In 2019 back-to-back cyclones over six weeks left millions without homes in Southern Africa, while an unprecedented area of the Amazon rainforest burnt. In 2020 Australia lost 10-million hectares and 1-billion native animals to wildfire, while a third of Bangladesh was flooded. And in 2021 the hottest parts of the US froze and parts of Western Europe received two months of rainfall in two days.

The most alarming part of the IPCC report is the rapid downward spiral. The 2015 Paris Climate Agreement created a pact aimed at keeping the rise in global surface temperatures below 2°C until 2100, but more ambitiously pursued keeping it under 1.5°C. The damning IPCC report highlights that the world is now set to miss both targets. Even in the best-case scenario of greenhouse gas emission reductions, global surface temperatures will increase by 1.5°C by 2040, and in a less optimistic scenario by 2034. That’s 13 years away.

It’s 2021 and most of the world is finally understanding that inaction towards climate change will continue to take millions of lives, wipe out homes and businesses, trigger widespread food insecurity and cripple economies.

SA has had a front-row seat. In the past five years we have declared three national states of disaster for drought, and seen coastal flooding, tropical cyclones and devastating wildfires. The economy and population are highly vulnerable to global warming: 40% of South Africans live within 60km of the coast and 60% of the economy is dependent on coastal resources and trade infrastructure such as ports.

The IPCC report confirms what we know but should shock us into realising we’re less than two decades away from a full-blown crisis. The code red alert must accelerate policymakers’ efforts to build an economic strategy around decarbonisation, rather than making carbon reduction a peripheral “nice to have”.

In 2020 the cabinet approved the establishment of the Presidential Climate Change Co-ordinating Commission to co-ordinate the implementation of SA’s Low Emissions Development Strategy, revise the National Waste Management Strategy, and co-ordinate the just transition to a low-carbon and resilient economy by 2050.

The commission has highlighted that the economic risks facing SA as the world charges ahead with decarbonisation are substantial. Many of the country’s trading partners have adopted net-zero targets and will aim to lower their emissions and impose trade barriers on emissions-intensive products. This signals trouble for SA as the fourth-biggest coal exporter in the world, sending about 70-million tonnes of coal to the rest of the world annually.

The commission also noted that measures such as decommissioning coal-fired power plants at the end of their commercial life and increasing renewable energy investments would be important, and it is hard to disagree with this. Which is why it is puzzling that in 2021 there is still ongoing litigation to stop the construction of new coal-fired power plants in Mpumalanga, that renewable energy contributes only 10% of SA’s power generation, and load-shedding is still a reality we face in a country full of wind, sun and biomass.

While the commission is a good first step, we know the biggest challenge: words come easy, action plans and funds can be set up, but implementation is hard.

In SA we need more than a set of recommendations; we need the department of trade, industry & competition to sit with the Treasury and produce a list of incentives to manufacture and subsidise domestic fleets of electric cars. We need the department of public works & infrastructure to work with the departments of basic and higher education to roll out solar panels at schools across the country. You get the idea.

To show SA is serious about the IPCC findings we need collaboration and implementation. We can’t just keep spending billions responding to droughts, floods and wildfires, as has become the status quo.

Just five large companies mine and benefit from 85% of SA’s coal, and the poor bear the brunt of the impact
Opinion
1 year ago