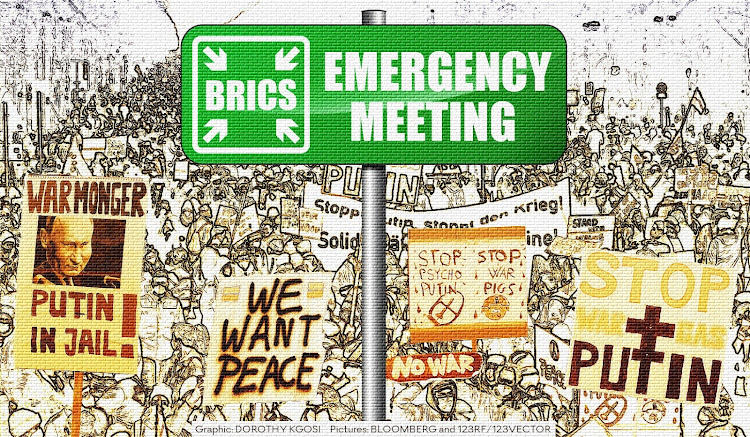 Recent days have seen a number of justified criticisms of the government’s stance (or lack thereof) on the Russian invasion of Ukraine. Questions have been raised about SA’s abstention from a UN General Assembly vote condemning Russia’s actions. Much has also been made of Kenya’s impassioned speech at the UN Security Council in contrast to SA’s muted tone or plain silence

As much as we may want the government to do the right thing, we also need to understand the constraints on SA’s diplomatic choices and where they came from, if for no other reason than to change them. Whereas Kenya is free to make emphatic condemnations, SA has a long-established partnership with Russia that makes diplomatic engagements far more complicated.

There are unique aspects of the situation in Ukraine that ought to be noted, as it is distinct compared to other forms of military conflict across the world. Most of these are different forms of internal conflicts, with a variety of external backers: Yemen, Ethiopia, Syria and Israel-Palestine. Vladimir Putin previously sent forces to support separatists in Georgia (2008) and Crimea in Ukraine (2015). As grievous as these actions were, they were nonetheless limited in scope. The action in Ukraine is categorically different, constituting a formal invasion of a sovereign state with the express intent of conquering it.

While there are justified comparisons to the US invasions of Afghanistan and Iraq, Russia is acting unilaterally, without any pretext of gaining UN permission, which in itself is a substantive failure of a permanent and veto-power member of the Security Council. Putin is setting a dangerous precedent and SA needs to respond accordingly that this cannot become the norm. There is also a great deal to be said and further researched about the more nefarious ways Putin’s regime has undermined democratic governments around the world, including through party funding — and not only in the US.

However, the more obvious constraint is SA’s membership of the Brics bloc and the history of this multilateral partnership. We must consider the origins of Brics to fully grasp SA’s situation. The bloc was formed in the early 2000s to strengthen the relationships between rising powers that were opposed to US actions in the Middle East. When SA opposed the US invasion of Iraq the country was labelled a “rogue democracy”, so joining forces with other Global South democracies served to strengthen those states. Brazil and India were already willing partners in the form of the India, Brazil, SA Dialogue Forum. Formalising relationships between non-Western powers would allow for greater degrees of action and freedom for smaller powers to choose their own diplomacy without fear of losing development assistance.

In the US drive to invade Iraq a great deal of financial, economic and diplomatic pressure was placed on many nations to fall in line. While France and Germany could afford to stand up to US aggression, it was not so easy for others. Aid was withheld, trade deals were put on hold and many other forms of aggressive diplomacy were visited upon states that did not contribute to or support the “Coalition of the Willing”.

This was the foundational rationale for Brics. At the time of its formation Brazil, India and SA were liberal democracies. Russia’s democratic status, though questionable, was no more authoritarian than many other states. While China is a one-party totalitarian state, for the longest time the Chinese Communist Party nonetheless practised internal democracy with regular changes in leadership.

The result is that while the two biggest powers in the Brics bloc were not liberal democracies, all parties could still hold conversations and understand each other ideologically. Such was the foundation for a partnership united in opposition to Western imperialism.

Importantly, all the Brics powers to a greater or lesser extent have long been opposed to the West’s policy of regime change. Across Latin America, Africa and Asia, Western powers backed coups and brutal dictatorships throughout the Cold War. The invasions of Afghanistan and Iraq could easily be seen as continuations of this bloody history. During the Cold War the Non-Aligned Movement tried to oppose such interventions but always lacked the necessary power. A post-Soviet Russia and a more capitalist and open China had the potential to bring change to the international system.

Since then, the grouping has sought to establish formal institutions, such as a development bank, to enable other states to ease themselves away from the dominant financial institutions (IMF and World Bank) and their disastrous structural adjustment programmes and other neoliberal perils, furthering the ability of states to choose their own way in the international system.

Today this situation is dramatically different. Putin’s Russia no longer pays lip-service to democracy, having changed the constitution to stay in power indefinitely. In China, President Xi Jinping similarly changed the political structure to become a de facto dictator for life. Moreover, India and Brazil have elected right-wing populist regimes that are in many ways hostile to the democratic norms SA still holds dear. Brazil’s president Jair Bolsonaro at times has been openly hostile towards Brics, and China in particular.

It may well be right for SA to condemn Russia’s aggression against Ukraine, but doing so will have consequences. Russia has been an important partner in the development of Brics, and it might be time to end that partnership. SA is also not the only partner involved, so any action would require consultation with the other members. Moreover, as the grouping is still in its institutional infancy, Brics does not have formal dispute mechanisms for handling members that act unilaterally, despite unilateral action being the very antithesis of the Brics “philosophy”.

Perhaps the best and most forceful action SA can take beyond symbolic gestures would be to call for an emergency meeting of Brics members. Putin’s actions are evidently contrary to the central ethos of the bloc, which is supposed to value diplomacy, negotiation and multilateral action. Moreover, SA’s foreign policy since 1994 has consistently stressed multilateralism and negotiation to resolve conflict. If Russia’s justifications for its actions truly concern Western imperialism, the other Brics members ought to have been included in diplomatic efforts prior to military action.

By failing to consult before invading Ukraine Putin has catastrophically undermined the partnership built over the last two decades. SA should work with Brazil, India and China to present their dissatisfaction with Putin’s disregard for their relationship and urge him to recall his forces and continue diplomatic efforts. Were Putin to acquiesce and include Brics in such negotiations the partnership could be rescued, perhaps even strengthened. However, if such intercession is dismissed with contempt, SA and the other members must take a serious look at the feasibility of continuing any partnership. What would be the benefit of a continued commitment to a grouping whose prominent members violate its raison d’être?

Putin’s actions have not been those of a friend, much less a partner, and it is time the SA government accepted that fact.

Three weeks into the conflict the company shutters stores in Russia and Ukraine, saying it will continue to pay its employees there
News
5 months ago

Ukraine needs to stand fast for next 10 days, to force Russia back into talks, official says

Vadym Denysenko, adviser to Ukraine’s interior minister, says Russia is desperate for at least some kind of victory
World
5 months ago