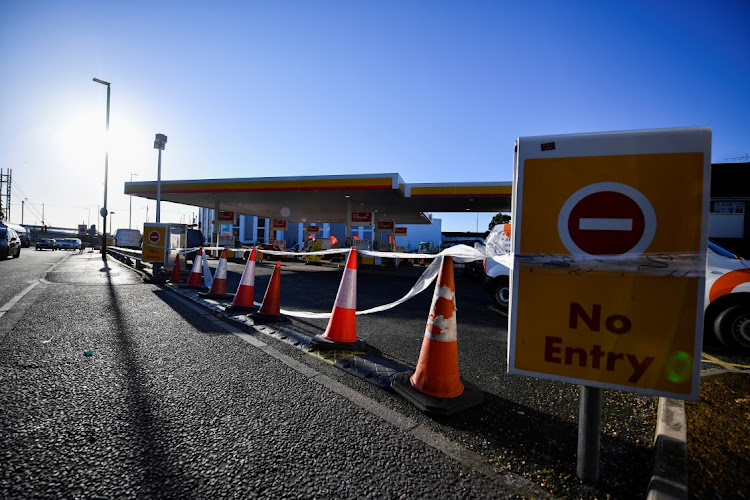 Hoarding is how we maintain civilisation and also how we end it.

A good example of the latter is on display in the UK, where the keep-calm-and-carry-on brigade have devolved into filling plastic water bottles with flammable fuel. Similar to the more daredevil plastic-bag fillers who sprang up stateside during the Colonial Pipeline hack, Brits pre-emptively topping up tanks on reports of fuel shortages help to foster the very thing they fear most.

Yet hoarding, of the organised type, is also vital to helping things run smoothly most of the time. Oil tanks and caverns full of stored natural gas are tranquillisers for energy markets (and ultimately consumers) apt to freak out at the slightest hint of disruption. Keep this in mind as the arguments over energy crunches and decarbonisation heat up.

We store commodities of all types as insurance against shocks — to manage volatility, in other words. It’s just easier to plan, invest, stay solvent and maintain a stiff upper lip when one can rely on a steady supply of essentials at reasonable prices. We are used to this, if never quite prepared for it, as previous crises have pushed humanity to build strategic reserves of everything from crude oil to frozen pork.

While dry fuel pumps appear to stem largely from a shortage of labour and a surfeit of panic, the UK’s (and the EU’s) natural gas squeeze is a different beast. Nikos Tsafos of the Centre for Strategic and International Studies published a concise explanation of the confluence of factors here.

One is a lack of redundancy. With declining domestic gas production, and having decided in 2017 to close its only major storage facility, the UK is now extraordinarily dependent on imports for a fuel that heats the vast majority of its homes and accounts for almost two-thirds of dispatchable power (meaning generation that doesn’t rely on weather or water-flow to work). As such, if the wind drops for a while and Asian buyers bid more for cargoes of liquefied natural gas (LNG), UK energy prices go haywire.

One solution is to invest in more supply of dispatchable energy sources, which tends to mean gas. However, this would only work for the UK if it also dealt with its reliance on LNG imports (and maybe rebuilt its storage capabilities). Moreover, doubling down on gas also runs counter to reducing carbon emissions over time.

“Over time” is the operative phrase there, because natural gas plays a critical role backing up renewable power from London to Los Angeles.

Electricity is different from other energy sources because it is costly to store. We “hoard” it mostly by hoarding spare generating capacity; an inventory of potential, rather than stored, power. In deregulated markets, such as the UK and large parts of the US, generators can be paid to simply have plants available when necessary or, as in Texas, rely on occasional price spikes to make most of their profits.

The expansion of renewables messes with this. Once built, solar and wind power tend to displace gas-fired turbines during, say, sunny or windy afternoons. Yet the grid relies on dispatchable generation, particularly gas, to step in when the sun sets or wind drops. Running fewer hours of the day and absorbing more wear and tear from ramping up and down, those gas plants require higher and higher prices to justify staying open.

In other words, transitioning energy systems must value gas plants increasingly for availability versus just raw output. But markets don’t necessarily do this well. Texas, for instance, relies on scarcity pricing to entice generators of all types. Yet this is likely to become less tenable as a wave of incoming solar power blunts the price spikes on hot afternoons that historically rewarded gas plants. Similarly, California finds itself having to pay old gas plants and even backup generators on an ad hoc basis just to stay open and cover the surge in evening demand when the sun fades.

In the near term, capacity payments — either at the grid or government level — will probably expand to make up for the shrinking revenue opportunity for gas plants in wholesale power markets. Power suppliers looking at the cascade of disasters or near misses in energy markets these past few years should find some value in contracting for firm capacity. The objective is to keep plants open that might otherwise close.

As much as that might seem to work against decarbonisation, the other lesson of 2021 is that while technology and finance have swung towards the energy transition, political momentum remains indispensable. High energy prices and fears of shortage have a way of messing with that. Longer term, batteries and other potential forms of storage, along with more sophisticated demand management, offer alternative backups to renewable power. But the long term is, after all, merely a succession of short terms.

On the plus side, volatility offers a powerful signal to speed up the development of batteries. For example, Andreas Gandolfo of Bloomberg NEF points out that when day-ahead power prices for September 15 in the UK spiked to a record £425 — mostly on the back of surging gas prices — a four-hour battery could have supplied electricity at an all-in cost of £250. Getting to the scale where batteries can make a difference will take years. That means putting a value on the insurance provided by gas-fired power remains an economic and political necessity, too.

A transition inevitably means friction, yet the imperative of climate change also means it can’t be abandoned. When this winter passes, we will still face the implacable reality of rising emissions and average temperatures. Unlike prior energy crises, “all of the above” isn’t tenable. Just like prior crises, however, paying today for the insurance of storage and redundancy would mitigate the volatility of tomorrow.

Lack of windy weather over the past two weeks has cut output from 11,000 turbines, which account for more than 20% of power generation
World
1 month ago

Extractors of fossil fuels must ensure the carbon dioxide generated from using them is buried, researchers say
World
1 month ago

Even with no Eskom, UK faces electric-vehicle power challenges
Opinion
2 months ago
Next Article