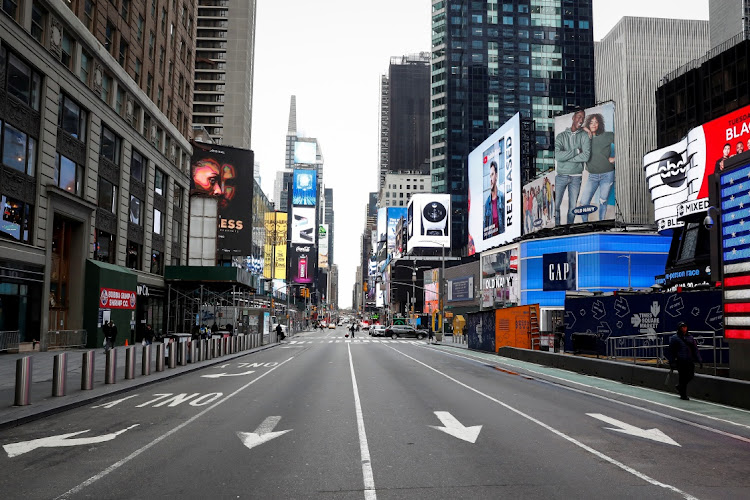 A nearly empty Times Square is show during the outbreak of coronavirus in New York City, the US, in this March 19 2020 file photo. Picture: REUTERS/LUCAS JACKSON

Like a lot of US cities, New York is showing signs of economic improvement as the Covid-19 pandemic haltingly recedes, but is nowhere near recovering the jobs or business wiped out in 2020.

That makes its long-term prospects hard to gauge, and provides ample statistical support for both sunny and gloomy appraisals.

On the cloudy side, New York had the second-highest unemployment rate among 34 metropolises in the US at the end of July, exceeded only by Los Angeles. A destination packed with theatres, restaurants and hotels, where hospitality is an essential industry, New York had 49% fewer diners this year than it did in 2019, according to OpenTable, the online restaurant reservation service.

Optimists have been citing rising home prices and robust municipal bonds as signs of improvement in the years ahead.

But even the city’s cheerleaders have missed one aspect of the housing boom that signals that people betting on the city’s future are relying on more than faith in its legendary resilience or the simple historical fact that recovery always follows a calamitous downturn.

The New York City home has not only appreciated strongly, it has done so with the narrowest price fluctuations among 20 US cities. That means New York homes provided the greatest risk-adjusted return during the 12 months ended June 30, according to data compiled by Bloomberg.

Volatility, or the degree of price swings, was lower in New York than in any major metropolitan area. That’s a display of investor confidence that the housing market will preserve its gains, in contrast to other cities where buyers see higher risks going hand in hand with strong price appreciation.

New York City gained 17% on average during the 12-month period, when home values in Phoenix, Arizona, climbed 29%. But the market for Phoenix homes has more than twice New York’s volatility, undermining its stability and value. Homeowners and investors want the greatest appreciation with the least risk of decline, which is why people pay more for the risk of a sudden Phoenix collapse in contrast to New York, where the rise is steady.

This isn’t the first time the New York economy proved its resilience in the face of disaster. Ten years after the terrorist attacks on lower Manhattan of September 11, 2001, the value of New York homes rose 30%, more than four times the country’s average with price fluctuations only 70% of the nation’s benchmark, according to data compiled by Bloomberg. The combination of low volatility and appreciation made New York the best real estate market adjusted for risk.

New York City debt securities provide another perspective on recovery from the pandemic. Among the five most populous states, New York has the greatest return (income plus appreciation) with bonds sold by its municipalities, principally New York City, during the past 12 months. New York debt gained 4.1%, easily beating California (3.0%), Florida (3.4%), Texas (2.3%) and Pennsylvania (3.7%), according to data compiled by Bloomberg. Among the top-performing 15 municipal issuers, at least 11 are New York City entities.

As the financial capital of the nation, New York shows no sign of losing its influence. If anything, it is more dominant than ever, with financial companies accounting for more than 50% of the market value of 294 publicly traded companies based in New York City, up from 42% five years ago, according to data compiled by Bloomberg.

The stay-at-home economy ushered in by the pandemic revealed New York’s emergence as a centre of innovation with 11% of the value of corporate New York designated as technology, more than double the ratio as recently as 2016.

To be sure, New York’s 8% unemployment rate is a sobering barrier to retrieving pre-pandemic prosperity. But the jobless rate plummeted from 15.4% in July 2020, an improvement that is among the largest for municipalities nationwide.

The New York recovery also gets a boost from residents’ adherence to masking and vaccination mandates imposed by state and local governments. Weekly infections from Covid-19, while 32,000 more than a year ago, are 50% less than Texas and 46% less than Florida, according to data compiled by Johns Hopkins University.

Investors are treating New York City as the tortoise that wins the race, even against speedy competitors like Phoenix.

While financial and political heavyweights thrash out deals and deadlines, only about a third of office workers have returned
World
10 months ago