Fuller transparency, the requirement to retain e- communication records and a strengthening of Freedom of Information requests are all key to countering the temptations lobbying presents 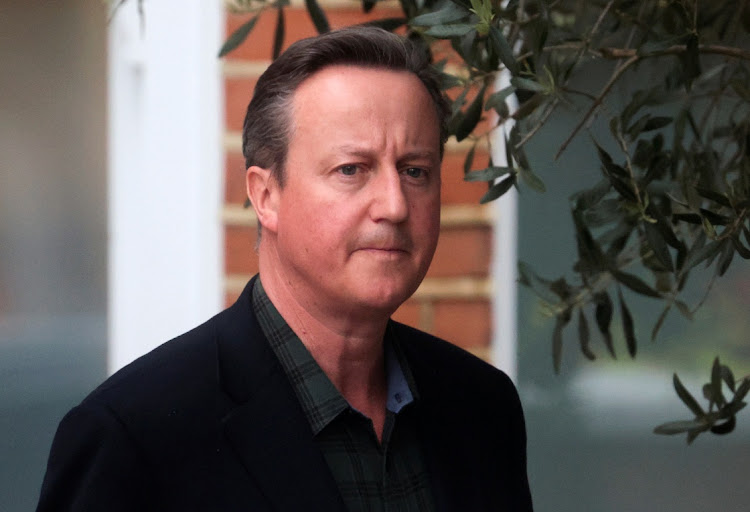 David Cameron in London, Britain, on May 13 2021. Picture: REUTERS/HANNAH MCKAY

Senior UK ministers are hardly paupers, but by the standards of high-flying private-sector jobs, they don’t exactly rake it in. That’s why it’s called public service. Power has its own perks, however. Many former top-tier public officials soon make up the gap in earnings after they leave office.

Writing a memoir, collecting speaking fees and serving on a few blue-chip boards are the usual post-government income streams. Those sorts of earners — largely trading on experience, celebrity and knowledge — are priced into the job and seem a fair reward for the pressures and responsibilities (yes, it is also a tremendous privilege) of high public office.

David Cameron certainly did that. He reportedly sold the rights for his memoirs to an imprint of HarperCollins for £800,000 in 2016 and gave lucrative speeches. But the revelations — by the BBC’s Panorama programme — that the former prime minister’s lobbying for the collapsed supply-chain finance firm Greensill Capital allegedly earned him $10m for two years of part-time work, showcased a different kind of post-government career — and one that holds dangers for any democracy.

During his recent testimony to a parliamentary committee, Cameron repeatedly refused to say how much he was paid by Greensill, except that it was “far more” than what he earned as prime minister. Panorama says it obtained a copy of a letter from Greensill Capital to Cameron that indicated he made £3.29m from selling a tranche of Greensill shares in 2019. He was also reported to have made a salary of $1m as a part-time adviser and received a bonus of another $700,000.

Cameron, through a spokesperson, denied receiving “anything like the figures quoted”. He hasn’t broken any laws. A parliamentary report into the Greensill lobbying in July found only a “significant lack of judgment”. But that’s beside the point. As Cameron himself has acknowledged, it was unbecoming of a former prime minister to be using back-door channels to lobby in that way.

Cameron’s aggressive lobbying trashed his reputation, embarrassed his party and may end up costing taxpayers a bundle. It also presents a challenge for Boris Johnson. Should the rules be tightened further? Should Johnson himself pledge to behave better when his turn comes? To both, the answer is yes. But don’t hold your breath on either happening.

Cameron is far from the first former leader to be embroiled in a lobbying scandal. Gerhard Schroeder, Germany’s former chancellor, has been Vladimir Putin’s most important international lobbyist, instrumental in getting approval for the controversial Nord Stream 2 pipeline. Former prime minister Tony Blair was criticised for the great sums of money he reportedly earned consulting for Kazakhstan’s autocratic leader (Blair has since wound down most of his private consulting to focus on his nonprofit work).

The problem is, while lobbying holds temptations and risks, it’s also an essential part of how democracies function. We don’t really want our policymakers — many of whom have no private sector experience — making decisions without any real input from those who their choices affect. We want charities, non-profit organisations, professional bodies and, yes, corporations to be able to put their case before politicians.

And yet to prevent wrongdoing, high levels of transparency are key. The great, glaring irony of Cameron’s lobbying scandal is how perfectly he predicted it in 2010 when he declared his intent to clean up politics. “We all know how it works. The lunches, the hospitality, the quiet word in your ear, the ex-ministers and ex-advisers for hire, helping big business find the right way to get its way.” Competition, not cronyism, would be his party’s watchword he promised.

Cameron did update the ministerial code to require recording meetings they have with outside interest groups every quarter and making it a legal requirement for lobbyists to publish their client lists. But the code doesn’t include WhatsApp messages, emails and texts. He wasn’t required to declare his lobbying as a Greensill employee. It took investigative journalists, not the lobbying register, to uncover the extent of his contacts — dozens of off-grid messages to officials in various government departments. Eventually, the British Business Bank included Greensill in a loan scheme, so he delivered.

The quarterly disclosure requirement, which is too infrequent, is often missed in practice. The government determines when these publications are issued (often buried late on a Friday afternoon). Some departments simply drag their feet. Lobbying registers in the US, Canada and Ireland all provide better and timelier information than the UK’s. The European Commission’s lobby register is better, too.

While the UK has a body to advise on the propriety of business appointments, its status, remit and lack of enforcement power make it weak. In its May UK compliance report, the Group of States Against Corruption (known as Greco) noted that only five of its 12 recommendations had been implemented satisfactorily.

Cameron’s Greensill windfall, whatever it was, compounds the impression that Conservatives are pretty good at getting around the rules — a theme Labour leader Keir Starmer has been hammering. “What this has exposed is how informal a lot of our oversight mechanisms are,” says Institute for Government associate director Tim Durrant. He argues that cabinet ministers should be banned from lobbying on behalf of a commercial organisation for five years after leaving government.

A longer cooling-off period would help. Cameron was leader of the party when many of the current cabinet were more junior members; it’s no surprise they’d quickly take his calls. A longer hiatus would at least weaken those filial ties. Fuller transparency, the requirement to retain electronic communication records and a strengthening of Freedom of Information requests — the government has been aiming for the opposite — are all key to countering the temptations lobbying presents.

I’ve often thought British legislators — who earn less than £82,000 a year while the prime minister makes about £161,000 — are not highly paid. Many legislators work in other functions outside their politics job, which seems poor value for the taxpayer given the complexity of many of the issues they are expected to legislate on these days. Being an elected representative should be a full-time job and compensated at a rate that will attract skilled talent.

Of course, retirement gigs for a senior level politician is a different matter. Even Singapore’s rates of compensation — the prime minister earns S$2.2m ($1.6m) and an MP S$192,000 — wouldn’t be enough to deter a Greensill car-crash if a politician is determined enough to maximise his wealth after leaving office.

Will Johnson follow the Cameron model when his turn comes? He has hardly hidden his own financial worries and will surely be expected to capitalise on his time in power. He may not have much interest now in rules that will then tie his hands later. Then again, those future constraints are unlikely to concern him too much. Johnson has always found ways to do things that other politicians can’t.