Annual savings of about R10.6bn could be achieved through the process, and time to reach resolution cut to months 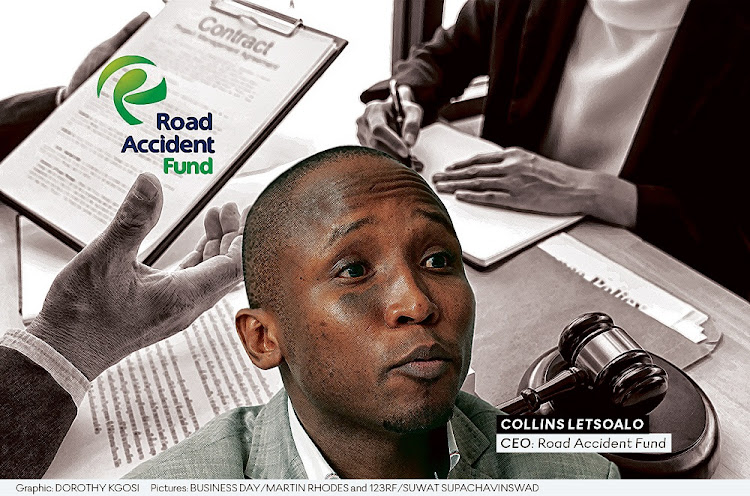 The Road Accident Fund (RAF) is a vital institution in a country in which road injuries and deaths are all too common and as many as 70% of cars are uninsured.

However, over the past few years the fund has been at the centre of a media storm, largely due to its financial state. While the RAF should undoubtedly be subjected to the same level of scrutiny as any other public institution, much of the commentary about it is misplaced.

The nature of the RAF and its operating environment is complex, nuanced and specific, with many changes, disputes and agendas unfolding in parallel. Add to this the context of SA’s economic condition, severe challenges facing state-owned entities as well as the complexities of the Covid-19 epidemic, and a clear picture becomes difficult to decipher.

This situation is not helped by the media and public discourse having shifted away from the realities on the ground at the RAF, and being mixed in with the general narrative of economic and political doom and gloom that has taken hold. A more realistic examination of the state of affairs shows that the RAF is far from a lost cause, especially if a new approach is taken.

To understand how the RAF might be rescued events that lead to the situation in which it now finds itself should be examined. The fund’s core operating model revolves on claimant disputes and has historically used the courts and the litigation process to settle these disputes.

Over the past several years it became clear that resolving each claim through high court litigation was achieving suboptimal outcomes for the fund and claimants, especially considering that most matters would be settled on the steps of the court. Annual savings of about R10.6bn could be achieved through a programme of out-of-court settlements, with the average time to reach resolution contracting from four years to a number of months.

Part of the reason the RAF has been unable to achieve this is that it has been plagued by maladministration, fraud and operational inefficiency for a number of years.

The first step in this plan was for the RAF to terminate its panel of defendant attorneys in early 2020, thereby putting a definitive and immediate end to its long-held cornerstone principle of resolution through litigation.

However, the turnaround had barely started when Covid-19 and government-imposed lockdowns hit. This black swan event severely affected the RAF’s operations, with courts and attorneys’ offices closed for several months in 2020 and early 2021.

Additionally, the RAF is primarily funded through fuel levies, which were badly affected by the lockdowns, resulting in a R7.9bn reduction in revenue, while about 95% of the vehicles that would normally have been on the road were parked. This had a direct impact on RAF claimants, as well as the many attorneys, advocates, medical experts and actuaries who depend on this income stream.

Coupled with the RAF’s history and the prevailing narrative about state-run entities, this scenario made the RAF an easy target for some in the media who have sought to paint it in a negative light. Yet the RAF is very different to other state-owned entities such as SAA, Eskom and Transnet.

While the fund is controlled by the state, it is not a stand-alone entity that exists to offer products and services to generate profits and employment for its shareholders — citizens. It is instead a social security mechanism that provides a critically important safety net for victims of road accidents, who are often among the most vulnerable and indigent members of society.

As such, the RAF is more like the SA Social Security Agency, whose mandate is to ensure the provision of social security services such as child support and disability grants. It is therefore a mistake to view the large claims expenses borne by the RAF in the same light as losses by Eskom (about R22bn annually), Transnet (R5.57bn) and SAA (R5bn). In fact, these expenses should be weighed against what might happen if the RAF disappeared.

A high court judgment (RAF vs LPC, case No 58145/2020) noted that a secession of the RAF would have “disastrous consequences for this country. Without the RAF, citizens would be entitled to claim for compensation in respect of loss or damage resulting from bodily injury or the death of any person caused by or arising from the driving of a motor vehicle”.

Without the RAF, if I were driving and accidentally ran into the back of another vehicle, injuring the driver or passengers, they would be able to sue me personally for losses and/or damages, which could easily run into hundreds of thousands or even millions of rand.

The RAF acts as a blanket insurance policy to cover all road users. Without it South Africans would not only have a financial crisis on their hands but the constitutional bedrock of our democracy would be compromised, with the state no longer able to provide social security and access to health-care services. If some are to be believed, we re close to such a scenario unfolding because the RAF is on the verge of implosion. The problem with this is that it ignores just how the RAF is funded.

The fund has a dedicated, secured and legislated funding line in the form of the national fuel levy imposed on road users (the ultimate beneficiaries of the RAF benefits). This unique funding model ensures a predictable, robust and steady monthly cash flow to the RAF — without it having to justify its allocation or priority from the national budget alongside all the government’s other commitments. This funding stream is often ignored in considering the fund’s solvency and long-term viability.

The negative views also ignore the progress that has been made in administrative process and payouts since October 2020. While challenges remain, things are improving and on the mend.

The public dialogue concerning the RAF’s inherent brokenness and “imminent implosion” is not helpful in bringing about the required changes. Rather, what is required is a fact-based conversation based on data and operational realities.

It is also important to recognise that progress has been made, especially regarding the reconciliation of payments and the improvement of various operational processes.

While there are challenges and work to be done, steps to rectify the situation should be recognised.

My hope is that South Africans across the board will support the process and travel the road with the RAF to ultimately help those who need it most — RAF claimants.

Here’s how the state can reduce fuel prices, says AA

After Eskom, the government-supported fund has been flagged as one of the biggest liabilities to the state
National
4 months ago
Next Article