TEMBEKA NGCUKAITOBI: Political rhetoric to speed up land reform is not matched by action

We cannot afford decline and regression in redistributing land, yet this seems to be where we are heading 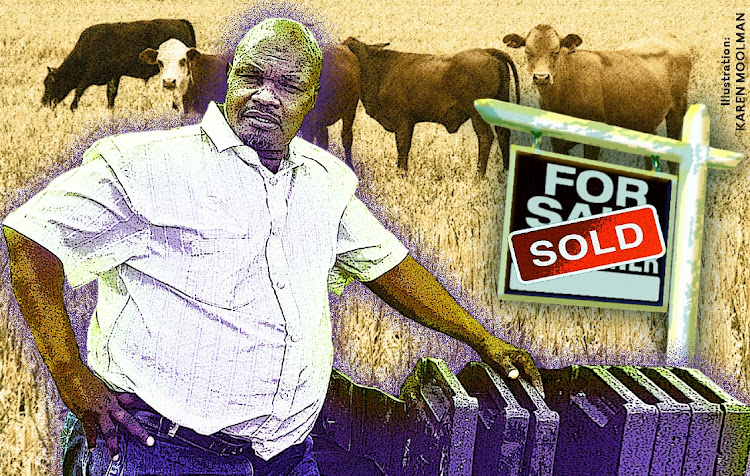 The state acquires farms from private landowners in the open market using the “willing buyer, willing seller” model — something that will not change after the amendment of the constitution. But the majority of land acquired in this way is grazing farms, which is not what the state actually needs. Official policy seeks to place food-producing farms in the hands of emerging farmers, but no state policy exists to translate this into practice. Illustration: KAREN MOOLMAN

Much political, legislative and administrative time has been consumed by debate over expropriation without compensation, but it is worth recalling that in 1997 the ANC’s land reform policy was formulated along three pillars: restitution, redistribution and land reform.

To judge whether land reform has failed or not we should therefore focus on these elements. Restitution means people who can show dispossession on racial grounds since June 1913 can reclaim the land they actually lost, or the rights to the land. The state facilitates the land claims and acts as guarantor for compensatory payments to present landowners.

The land redistribution programme focuses on equitable access to land for settlement and commercial purposes. Tenure security is about transforming the rights of persons over the land to reverse the colonial and apartheid legacies. The intention is to guarantee greater levels of security of tenure. An inscription to underpin each of these programmes was inserted into the structure of the constitution.

These elements are part and parcel of section 25 of the constitution. The proposed constitutional amendment will not affect these portions of the section. Any limitations will remain. Yet at best these three parts of the land reform programme have stagnated; at worst they have been catastrophic failures.

Recent radicalism by political actors does not change this fact. Nor do hollow promises such as those made by President Cyril Ramaphosa in May 2018 that each Friday title deeds would be handed out “until such time everybody has security of tenure”. He dubbed this utopian programme “Title Deed Fridays”.

Meanwhile, parliament has been hard at work changing the compensation provisions of section 25 of the constitution. Politicians have prevaricated as to the rationale for this amendment. A report of a special committee established for the purpose of testing the necessity of the amendment ultimately settled for the less-than-illuminating “making explicit what is implicit” in the section. But if the constitution already allows — in implicit fashion — the state to refuse to pay compensation in appropriate cases, why should so many resources be used on an amendment process?

Not all has been buried in the same thicket of conceptual confusion, though. A different committee of parliament has been introducing a new expropriation law to replace the apartheid-era Expropriation Act of 1975. Yet no legislative, policy or administrative work is being done to actually place land in the hands of the people. No new legislative proposals have come from the department actually responsible for land reform and agriculture about how to speed up the process.

Some work is being done to support emerging farmers, but without adequate funding and in light of the collapse of Land Bank the prospect of a broad agrarian programme with the capacity to meet the food needs of the country is illusory.

Twenty-five years is a long time to evaluate our land reform trials and errors. We cannot afford decline and regression. Yet this is precisely where we seem to be headed. Political rhetoric to speed up land reform is simply not matched by action. In fact, the administration of both the restitution and redistribution programmes has been in terminal decline for at least a decade. The promises of 2018 have not translated into any change of policy or approach.

Some figures are necessary to place this in perspective. A year ago the budget for land redistribution was R1.2bn. Last year this was slashed by R300m. There has been no notable increase in the budget for land restitution either; it has remained at about R2bn, under the control of the Commission for Restitution of Land Claims, which must balance this with other operational needs.

Despite withering criticism by the Constitutional Court in the Mwelase case, progress in the resolution and settlement of labour tenant cases has also been slow, with the court-appointed special master subjected to bureaucratic rigmarole and limited funding. Reports of widespread financial malfeasance in the land distribution programme, as found by the Special Investigating Unit, have not been taken seriously and addressed.

Another stumbling block is the shortage of qualified staff. Agriculture, land reform & rural development minister Thoko Didiza recently admitted that to a “large measure” employees of her department do not have the skills required to undertake the job of land reform. The disaster of the recent administration of the farm lease programme has been a case in point. The state announced that thousands of hectares of farmland were set to be allocated for the benefit of black farmers, but they are still waiting.

While the failure of the farm lease programme has largely been attributed to corruption and nepotism, there is also evidence of a general state of disarray in the department. For instance, some farms were allocated despite already having tenants, with officials apparently under the impression that the farms had been abandoned. There is no reliable database of the occupants of state farms.

The farm allocation programme is based on leasehold, on typical commercial terms. The state acquires farms from private landowners in the open market using the “willing buyer, willing seller” model — something that will not change after the amendment of the constitution. But the majority of land acquired in this way is grazing farms, which is not what the state actually needs. Official policy seeks to place food-producing farms in the hands of emerging farmers, but no state policy exists to translate this into practice.

The terms of leaseholds for farms that are eventually allocated to black farmers are hugely favourable to the few who obtain them. A farm of more than 300ha can be leased for only R6,000 a month, with an annual escalation of 6% for a maximum period of 30 years. There is also an option to buy the farm, exercisable at the instance of the farmer after five years of the leasehold.

The problem is that the department is unable to account for the rental collections as these payments do not appear in the state’s financial records, placing in question what is happening to this money and whether payments are even being made. The model has manifest limitations as only a few can access these farms and their potential for food production is severely limited. Yet this has been touted as a breakthrough for agricultural productivity by black farmers.

If land reform has been scuttled by these problems we may legitimately ask why no energy is being devoted to addressing them. The consequences are predictable: our collective future is at stake. Though the scale of what must be done to bring the land reform programme back on track is contested, what is incontestable is that until the government matches its words with action it will be hard to escape the conclusion that land does not actually matter to it.

• Ngcukaitobi is the author of the recently published ‘Land Matters: SA’s Failed Land Reforms And The Road Ahead’.

Expropriation is hard-wired into the country’s DNA. It has led to centuries of violence, which suggests that any promise that a new law will be the ...
Features
1 month ago

ANN BERNSTEIN: Expropriation Bill is not as bad as portrayed, but the crux lies in implementation

While the proposed legislation needs amendments, what matters is that officials understand the intention of the law
Opinion
4 weeks ago
Next Article