Poultry producers receive no government subsidies and the R6.1bn import cost could be used to boost the economy

As we launch into 2021 amid uncertainty over the Covid-19 pandemic, the SA poultry sector remains a strategic national industry. Chicken has long been the major source of protein for South Africans, cementing this industry’s role in assuring our country’s food security.

A modern, efficient and internationally competitive industry, and the largest component of our agriculture sector, it plays a significant role in the economy, contributing to food security and employment. The poultry industry contributes about 18% of agricultural GDP and 39% of animal-product gross value (2016 figures). The “farm-gate” value of chicken meat and egg production was about R47bn in 2016, with the retail value representing a further R10bn-R15bn.

This is an industry with earnings of more than R50bn and a major employer with about 110,000 direct and indirect workers. As a large consumer of maize and soya in feed supplies, it also supports a further 20,000 jobs in the grain industry. 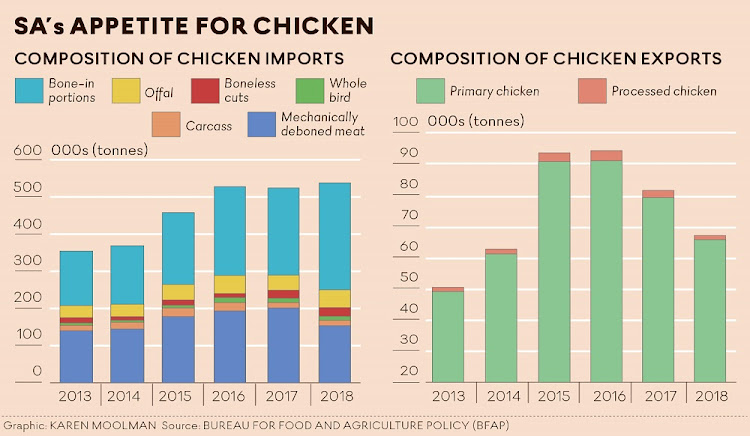 Despite these economic inputs SA’s poultry producers receive no government subsidies, unlike their counterparts in other production areas, particularly the EU. Nonetheless, the industry is globally competitive, having outperformed the EU for the past 13 years on a cost per kilogram basis, and it needs no tariff protection when the playing field is level.

The SA market is an attractive prospect for foreign trade partners, sometimes to the detriment of domestic producers. The chicken industry has been under assault from foreign producers, including the EU, for at least two decades, and it has been in crisis for nearly 10 years because of steadily rising imports. Unfair and predatory trade practices, including dumping, have stolen 30% of market share, bigger than that of the largest domestic producer. It has to be noted that, in contrast, the EU’s own import figures hover around 7%.

Chicken imports reached a record high in 2018, when 566,000 tonnes were imported at a cost of R6.1bn. Imports in 2019 were 5.5% higher than the five-year average from 2013-2017. It was only in 2020 that import volumes decreased, due to a combination of global reductions in demand because of Covid-19, the implementation of new tariffs against Brazil and the US, and rand-dollar exchange-rate fluctuations.

Tariffs have been only partially effective, and it is expected that the assault will resume when world trade picks up as the pandemic retreats. Research group BFAP has estimated that by 2028 imports will account for 33% of SA chicken consumption.

Calculations show dumping in excess of 300% from Germany, which means German chicken is sold in SA at a third of the price it would fetch in Germany itself; even lower than the cost to produce that chicken.

Germany is not alone; two of its fellow EU countries are also subject to antidumping duties, in place since 2015. These are reviewed every five years, and at the time of the anniversary it was clear that a renewed application was necessary as the onslaught has only ramped up. In addition, five more countries, including four in the EU, have been implicated and are potentially liable for antidumping duties.

One cannot ignore the irony of the developed countries supplying development aid to countries with one hand, and with the other hand decimating local industries with dumping. Ghana is one African example where dumping has destroyed the domestic chicken industry. Whereas Ghanaian producers used to supply 100% of local consumption 20 years ago, they now have barely 5% market share.

The effects of unfair trade have to be further considered in the context of unemployment rates and poverty measurements. SA’s official unemployment rate stands at 30.8%, with 43% of people jobless according to the expanded definition of unemployment, which includes discouraged work seekers. This puts SA at the bottom of the list of the world’s major economies.

As for poverty, about half of South African adults — 49.2% — live below the upper-bound poverty line — this was last measured before Covid-19. A shocking 62% of our children live in multidimensional poverty and one third (27%) of children under the age of five are developmentally stunted, which is directly linked to poverty-related malnutrition.

Children are considered multidimensionally poor when they are deprived of at least three out of the seven dimensions of poverty — health, housing, nutrition, protection, education, information and water & sanitation. It is distressing to consider that the majority of SA’s next generation starts life with such a disadvantage.

Imagine for a moment that the R6.1bn that flowed out to buy chicken imports during 2018 was rather invested in the SA economy, expanding local industry, developing infrastructure to support emerging farmers, creating jobs across poultry and grain production. Conservative estimates are that up to 15,000 new jobs could have been created, affecting tens of thousands of families, alleviating poverty and improving prospects across the country.

If all of SA’s trade partners played according to World Trade Organization rules this scenario might well have been realised, but instead this country has lost jobs, and seen poverty increase and hope dwindle for thousands of South Africans.

A further concern regarding chicken imports is the multitude of food safety issues with much of the chicken making its way to SA markets. The EU, while protecting its own producers with strict import regulations, exports unwanted brown meat, the by-product of overproduction of the white breast meat favoured by EU consumers, in frozen bulk to SA. What is not commonly known is that upon arrival this product is often thawed, injected with brine and then repackaged and sold as fresh, or refrozen.

One would never expect German, Irish or Dutch consumers to accept meat that has been processed in this way, but the reality is that this is what happens to much EU poultry offered to South African consumers. Ironically, SA’s own poultry producers comply with much stricter food-safety measurements than imports. One of these measures involves traceability, a big concern with imports.

As things stand, EU poultry often ends up in SA shops in bags that list up to 11 potential source countries. It is not unusual to see a label stating “Germany and/or Hungary and/or Ireland and/or Denmark and/or Argentina and/or Brazil”. This clearly comes after meat is defrosted, repackaged and refrozen. The implications for food safety are clear, and raise a red flag — should there be any contamination, it would be impossible to trace the meat to its source. It is hard to imagine that this would be considered acceptable to EU consumers.

In a world re-evaluating its policies and economics in the light of a pandemic that caught the global community on the back foot, reciprocal and fair trade has never before been more important. When it comes to food security, job creation and poverty alleviation, domestic production has to be prioritised in any economy, with the buy-in and support of all trading partners.

• Sulliman chairs the SA Poultry Association and Breitenbach is GM of the association’s broiler organisation.

Mistruths abound as there is no poultry dumping in SA

EDITORIAL: Remgro making the worst of a bad situation for RCL

Eggs in a bad basket

Food producers, especially those in the poultry sector, have been battered on all sides, writes Anthony Clark
Companies
4 months ago
Next Article