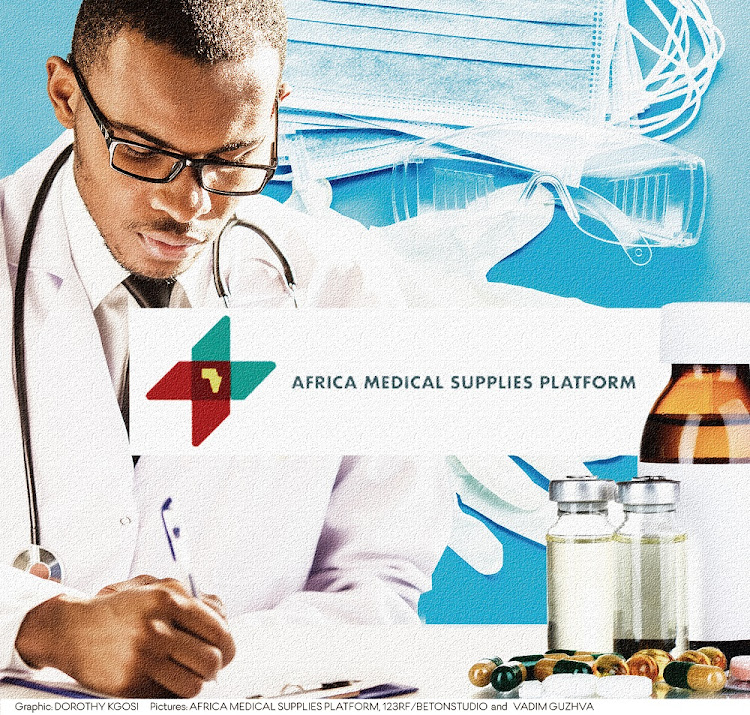 A global battle for access to Covid-19 tests, vaccines, treatments and other essential supplies has highlighted the challenge many African countries have faced for decades.

Most African countries, with their developing health systems, have traditionally been locked out of access to some of the most essential medicines and equipment. Their participation in high-priced and competitive international pharmaceutical markets has been limited. These challenges have become glaringly clear during the coronavirus pandemic, as African countries have faced shortages in everything from gloves, gowns and face masks to testing kits and ventilators.

The Africa Medical Supplies Platform launched recently by AU chair President Cyril Ramaphosa could be the turning point the continent needs, not only as it fights the fallout from Covid-19, but in future too. Described by Ramaphosa as the potential Amazon or Alibaba for resources to mitigate the coronavirus on the continent, the platform has been set up as a one-stop shop to address shortages and security of supply. It has also pledged to ensure price competitiveness and transparency in procurement.

This development creates an opportunity for the continent to work, after Covid-19, towards a lasting solution of pooled procurement, which would increase the availability of important health technologies, including drugs, vaccines and diagnostics. Pooled procurement, also known as joint purchasing, involves bulk purchasing of medicines on behalf of a group of countries or companies.

Over the years African countries have been up against the following challenges in accessing medical supplies:

We and our partners at the Drugs for Neglected Disease initiative and the Global Antibiotic Research & Development Partnership face a number of access challenges as we seek to develop  and deliver new treatments.

The market for products for neglected tropical diseases is stuck in a high price/low volume trap, in which suppliers are forced to keep prices high to compensate for small, inconsistent purchase orders.

Knight Therapeutics’ miltefosine, a life-saving treatment for leishmaniasis —  an infection spread by sand flies — is a case in point. A box goes for €150 (R3,010) if a country or organisation orders anything less than one batch (3,200 boxes). If you go above one batch, the price instantly halves.

Sadly, no African country is able to benefit from this discounted price because the batch size requirement exceeds their individual needs. If four to five countries were to pool their orders, they would all benefit from the discounted amount.

Pooling orders can save costs, boost efficiencies and ultimately save lives, as demonstrated in a project carried out by the Clinton Health Access Initiative

An example is the use of cefepime-taniborbactam, which is being developed in partnership between the Global Antibiotic Research & Development Partnership and biotech company Venatorx, to treat serious infections caused by antibiotic-resistant bacteria.

The initial low sale volumes will be aggravated by the limited purchasing power of many African countries for novel therapies. Pooling procurement could allow medicines to be manufactured, stored and distributed to patients across Africa, for whom rapid access is often a matter of life or death.

Pooled procurement of medical supplies among all African states will not be achieved easily or within a short period, even with the best intentions. But there are bright spots in Africa and other regions, and significant successes have been recorded.

A successful regional pooled procurement mechanism is practised by the Pan American Health Organisation of Latin American and Caribbean countries. Under its Revolving Fund, the Pan American organisation has helped protect people against some of the world’s worst diseases, including polio, measles, yellow fever, rotavirus and hepatitis C.

Pooling orders can save costs, boost efficiencies and ultimately save lives, as demonstrated in a project carried out by the Clinton Health Access Initiative. By catalysing the scale-up of treatment for HIV/Aids, the Clinton initiative, together with the World Health Organisation’s Unitaid, helped cut the price of paediatric antiretrovirals more than 80% and get antiretrovirals to more than 400,000 children.

The Clinton initiative achieved this through making long-term agreements with primary and secondary suppliers and by negotiating reduced prices on behalf of Unitaid and others.

The project, deployed from 2006-2015, holds important lessons, as some of the challenges — such as the small and fragmented demand affecting paediatric HIV in Africa and elsewhere — are also a problem in other disease areas.

While Covid-19 is taking its toll on Africa’s people and economic prospects, it has also highlighted cases of tremendous ingenuity and demonstrated African solutions to public health challenges. Hundreds of suppliers have listed on the African Medical Supplies Platform since its launch, while innovations are making waves. Among them, South Africans have developed three local designs for non-invasive ventilators, and production is under way.

The pandemic should be used as an opportunity to forge a better deal for access to medicines in Africa. It is time to usher in a new era of intra-Africa co-operation and work towards a fairer deal to get medicines and supplies to the people who need them most, at prices they can afford.

In a webinar hosted by the science and technology department, Mkhize said bed capacity to manage Covid-19 infections was an ongoing battle
National
8 months ago

Global lessons for supply chains from the Great Lockdown

China, the EU and the US are responsible for 63% of world supply-chain imports, and 64% of supply-chain exports; this should change, writes Dorothy ...
Opinion
9 months ago

Testing everyone is impossible, so creating a hierarchy of who does get tested and treated is vital, write Lungile Pepeta and Fikile Nomvete
Opinion
10 months ago
Next Article

BIG READ: ‘The pandemic is gaining momentum’: Africa prepares for surge in ...

BIG READ: ‘The pandemic is gaining momentum’: Africa prepares for surge in ...