Asian refining margins strengthen but not without risk 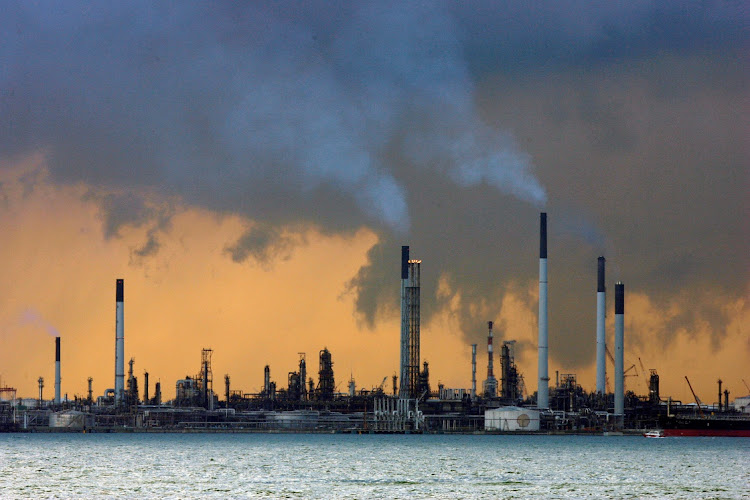 The towers of an oil refinery off the coast of Singapore. Picture: REUTERS/VIVEK PRAKASH

Launceston — A strengthening in refinery margins in Asia is leading to a sense that the worst may be over for the embattled sector as more nations in the region start to emerge from coronavirus lockdowns.

But the main risk now for the crude oil and refined products industries is that the renewed optimism leads them to boost output to levels above the nascent recovery in demand.

The profit margins, or cracks, for producing both petrol and gasoil, the building block of diesel and jet kerosene, have bounced off record lows in recent sessions, as traders report tentative signs of a recovery in demand and more interest in securing cargoes.

The crack for making a barrel of fuel from Brent crude in Singapore rose to a loss of 24c a barrel on Monday, the highest in two months and up from the low of a loss of $13.15 on April 14.

However, both refined products are still well below their highs so far in 2020. Petrol is still loss-making, compared to a high of a profit of $9.35 a barrel on February 11, and the gasoil crack is 73% below its high of $16.15 from January 3.

The improvements in cracks in recent days have lifted refinery margins close to breakeven, with a typical complex refinery in Singapore processing Dubai crude making a loss of just 6c a barrel, based on the prices of the underlying crude and products on Monday.

With the large discounts to benchmarks like Dubai crude being offered by major exporters such as Saudi Arabia, it is likely that many of Asia’s refiners are able to make a profit from processing at current prices. This may encourage them to ramp up operations, which were severely curtailed in April as the new coronavirus led to lockdowns across Asia.

While fuel demand is starting to recover as lockdowns are eased in Asia, the China experience may give some cause for caution. The world’s second-biggest economy was the first to impose lockdowns, and the first to lift them as it contained the coronavirus, which was first detected in the city of Wuhan in December.

Asian refiners will have to be cautious about measuring the actual increase in demand and tailoring output to match, while at the same time dealing with the likelihood of higher product exports from China.

China has issued a second batch of fuel export quotas to domestic refiners, allowing for 28-million tonnes of shipments, mainly for petrol, diesel and jet kerosene, Reuters reported on May 11, citing four sources.

This follows the first 2020 quota allowance of 27.99-million tonnes and means Chinese refiners will have the ability to keep product exports at the current high levels, a move that in turn is likely to exert downward pressure on refinery margins.

Add in likely restarts and ramping up of output at India’s export-orientated refineries and it appears likely that the risk to Asia’s refining sector is one of renewed oversupply.

South Korea warns of second wave of infections, while new cases accelerate in Germany
Markets
1 year ago
Next Article