The president shared details of his much anticipated call with Zelensky 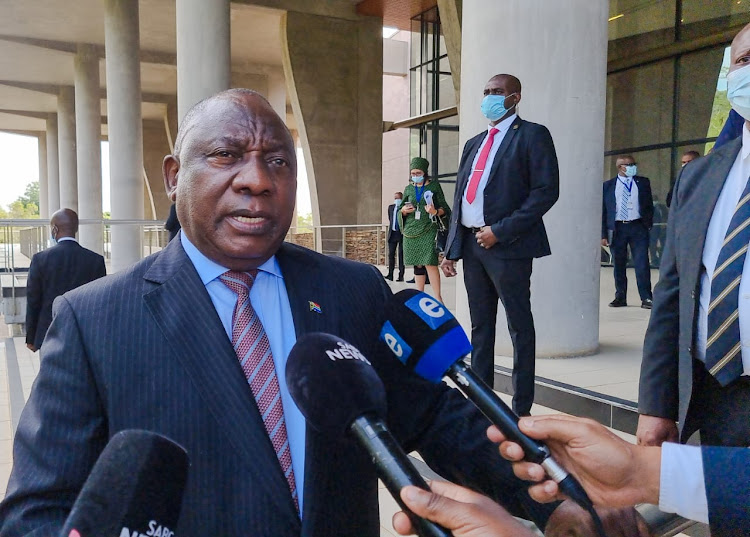 President Cyril Ramaphosa says during his telephonic conversation with Ukraine President Volodymyr Zelensky they discussed a wide range of issues including the global food security, building relations with more African countries and discussing the war at the African Union. Picture: AMANDA KHOZA

President Cyril Ramaphosa on Friday said he was willing to make a visit to war-torn Ukraine. This after President Volodymyr Zelensky extended an invitation to him during their phone call on Wednesday evening.

But, Ramaphosa said he will do so “once the conflict is over”.

The president shared details of his much anticipated call with Zelensky which came after the fifth session of the SA-Botswana binational commission in Pretoria.

On Wednesday evening, Zelensky took to Twitter to announce he had had a discussion with Ramaphosa.

WATCH: President @CyrilRamaphosa
has described his phone call with Ukrainian President@ZelenskyyUa, as being "wonderful".
"We chatted abut the relations between South Africa and Ukraine. He expressed his wish for us to have really close economic relations." @TimesLIVE pic.twitter.com/IxW3BSBeZc

He said: “Had a phone conversation with @CyrilRamaphosa. Told about our resistance to Russian aggression. Discussed the threat of a global food crisis, deepening relations with the Republic of SA and co-operation within international organisations.”

On Thursday Ramaphosa tweeted that the two leaders also discussed the “tragic human cost, as well its global ramifications”, of the ongoing war, which began in February.

“We agree on the need for a negotiated end to the conflict which has impacted Ukraine’s place in global supply chains, including its position as a major exporter of food to our continent. President Zelensky anticipates closer relations with Africa in future,” read Ramaphosa's tweet.

After bidding farewell to Botswana President Mokgweetsi Masisi, Ramaphosa turned his attention to the media who quizzed him about the call.

He said: “President Zelensky and I had a really wonderful chat. We chatted about the relations between SA and the Ukraine and he expressed his wish that we could have closer economic relations.

“I expressed our condolences for the people who have died and are dying in the conflict between the Ukraine and Russia. He kindly accepted that.”

He added that: “I informed him that we are going to have a discussion about that conflict at the AU level and he informed me that he had spoken to President Macky Sall [AU chair] and he expressed that he would like to have closer relations with more African countries.

“I was really pleased that we could have such a wonderful chat. [It was] surprisingly pleasant because he is right at the centre of a conflict and he found time to chat to me. He also expressed his condolences for the deaths of people in KZN. He is well informed about that.”

When asked what Zelensky said about the perception that SA could seemingly be taking the side of Russian Federation by its non-alignment stance, Ramaphosa said: “No, he did not have any hesitation about talking to me. In fact, I found him to be so warm and open to chat and the other issues that he touched on quite a bit was the food security issue.”

Ramaphosa said Zelensky told him he was concerned about global food security as the Ukraine was considered a “bread basket for many countries and the world”.

He added that: “He did not express any doubt or any hostility to me and that’s why I characterise the discussions as having been wonderfully warm.”

The two heads of states also discussed how the nations could enhance co-operation.

The call comes on the back of a Sunday Times report that bickering between SA and Ukrainian diplomats was behind the delay in the phone call between the two heads of state.

Before Zelensky's call, Ramaphosa had already spoken to Russia's Vladimir Putin, China’s Xi Jinping and US President Joe Biden in a bid to explain why SA had taken a neutral stance on the ongoing war.

The Ukrainians were said to be unhappy that SA requested a call between the two presidents a week after Ramaphosa had a telephone conversation with Putin.

Department of international relations and co-operation (Dirco) spokesperson Clayson Monyela told the Sunday Times it was Ukrainian ambassador to SA Liubov Abravitova’s responsibility to facilitate the meeting after a request was made on March 11.

However, in an interview with the newspaper, Abravitova said she had been struggling to get an audience with both Dirco minister Naledi Pandor and Ramaphosa.

The closest she could get to Ramaphosa was through an informal meeting with his special adviser on international relations, Maropene Ramokgopa.

On Thursday Abravitova told TimesLIVE she was happy the two statesmen had finally spoken.

Vladimir Putin declares Mariupol ‘liberated’ but Ukraine does not concur