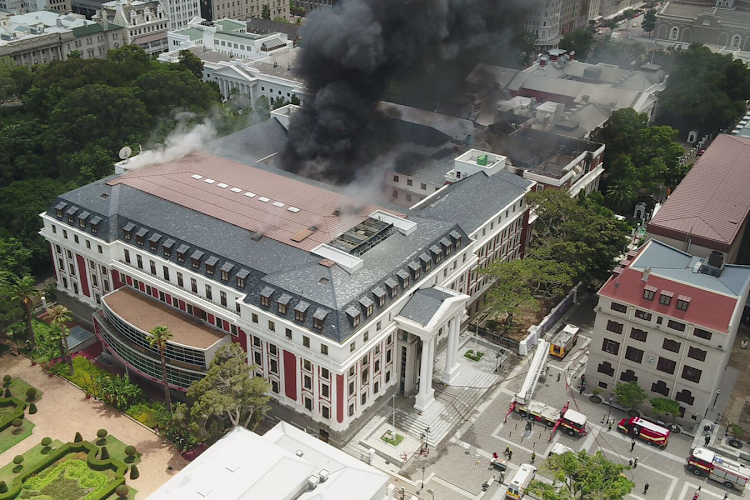 The fire this week caused extensive damage to buildings in the parliamentary precinct in Cape Town. Picture: CITY OF CAPE TOWN

The ANC in parliament has rejected Cape Town mayor Geordin Hill-Lewis’s offer for parliament to use the city’s facilities for February’s state of the nation address (Sona) as “highly opportunistic” and a political ploy.

It wants parliament to instead explore other avenues.

The party has also expressed its opposition to calls for parliament to be relocated to Tshwane. The ANC caucus held a special meeting on Tuesday to discuss the fire that razed buildings in the parliamentary precinct earlier this week.

On Wednesday the party said there was no need for parliament to move to Tshwane or for the DA-led government to host Sona. It did not elaborate on calls for relocating the legislature, reignited after the devastating blaze.

“The ANC caucus has agreed that our focus as the ANC is to ensure we wrestle out between those who are recommending the use of the facilities of the City of Cape Town (DA-led) and those who are pushing for the permanent relocation of parliament to Tshwane,” it said.

“Caucus noted the highly opportunistic manner camouflaged as an act of generosity on the part of the DA-led Western Cape government to lobby for hosting Sona as a political ploy, and that other avenues must be explored.”

Hill-Lewis announced on Sunday that he was in contact with National Assembly speaker Nosiviwe Mapisa-Nqakula and offered to make the city’s council chamber available for sittings of the National Assembly, as well as the use of the Grand Parade and the City Hall for Sona.

“We want to see parliament continue its important work, and we will do what we can to help,” he said.

The ANC said parliament was under attack and everything should be done to protect it.

“Caucus has noted that since the dawn of democracy, it has become commonplace for the ANC to be attacked by opposition parties in parliament,” it said.

“Today, not only is the ANC under siege, but parliament, the symbol and essence of the will of every SA, is under attack.

“Caucus expressed its extreme distress over activities that shook the nation at its core on Sunday, leading to a trail of devastation in our parliament. As caucus we vow not to let the country dissipate into a state of chaos and anarchy unravelling the very fabric of our foundational values.”

It called on law enforcement agencies to investigate whether there was a co-ordinated plan that led to the destruction of parliament.

It noted the fire occurred a few months after the July 2021 mayhem that led to hundreds of deaths, destruction of property and huge economic losses in Gauteng and KwaZulu-Natal.