Thandi Modise, Thabang Makwetla and Mondli Gungubele say though they were held against their will in St George's Hotel 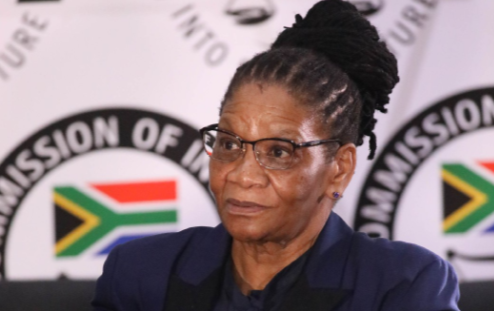 For nearly three hours, three of the country’s highest-ranking politicians were held against their will inside a Pretoria hotel conference room.

On Friday, defence minister Thandi Modise, her deputy Thabang Makwetla, and minister in the presidency Mondli Gungubele detailed their hostage ordeal at the Saint George’s Hotel in Irene, where they were kept hostage for two hours 50 minutes.

The trio were meeting liberation war veterans to hear their complaints ranging from lack of decent housing to the government’s failure to provide for their children.

But the meeting could barely start as disagreements arose on the agenda for the meeting. The war vets demanded to meet President Cyril Ramaphosa and Deputy President David Mabuza immediately.

“We had a meeting at the instance of military veterans, who we met last night [Thursday] and we anticipated that they would be interested in the presidential task team's work progress, as we had those preparations.

“So, getting there, our intention was to start a meeting and listen to what exactly they wanted the meeting to do, because we were very careful about assuming. We proposed the agenda [but] we could not move beyond that point because they demanded the president and deputy president should be there,” said Gungubele.

“We think is it not fair to expect the president to be everywhere whenever he is wanted because he has created a machinery through which he interacts with people and we think we were that machinery last night.”

Gungubele said it was the military veterans who declared a stalemate when they could not accept that the high-profile trio represented Ramaphosa and Mabuza.

In a press briefing on Friday October 15 2021, minister of defence Thandi Modise spoke about being held hostage by MK veterans on Thursday evening at St George's Hotel in centurion. MK veterans reportedly invited the Modise and colleagues to a meeting however the meeting quickly turned into a hostage situation as disgruntled veterans demanded Modise call the deputy president David Mabuza to address them. Police moved in after a three hour hostage situation and rescued the ministers.

As the ministers proceeded towards the door, the military veterans locked them inside.

“We realised then that it was no longer as exciting at it was when we started. We were there against our will, but it was not a violent stay,” said Gungubele.

Modise added that before the start of the meeting, they had actually joined in with the veterans in singing and dancing to struggle songs.

“Therefore, we did not feel that our lives were in danger, but we were unhappy to be refused to leave when the meeting had clearly aborted,” she said.

As the situation continued to degenerate inside the meeting venue, the trio's VIP protectors maintained their cool and did not scuffle with the military veterans.

“They knew that we could hold our own because what was taking place within those closed doors was people talking, people differing on issues and now and then breaking into song. It was not a bloodbath,” she said.

It was at that point that the police special task force was called in to save the night from further degeneration.

Said Modise: “The room was barricaded so the police had to open those door, but what they used [to get in] I do not know. When we heard the loud bangs. We all went down like we do in the movies and in the planes and that is what happened.

“People were saved and I have been long enough in the MK to know that no bullet was fired ... there was enough restraint from protectors such that nobody was touched.”

Modise said there was no chance Ramaphosa and Mabuza would be brought into a room filled with an “unrecognised group of people”.

But she and Makwetla would arrange to meet the same group once more, once the dust had settled.

But the charges pressed against 56 of their captors, she concluded, will not be dropped as they should know that their actions have consequences.

TOM EATON: Brainwashing not to be feared from ministers who can barely wash the Merc

ANC wants to rewrite history for schools, but will it put the PAC back into Sharpeville Day?
Opinion
1 month ago

But the energy minister’s attitude could be putting him at odds with Cyril Ramaphosa, who speaks of the need to cut emissions and win climate aid
National
1 month ago
Next Article