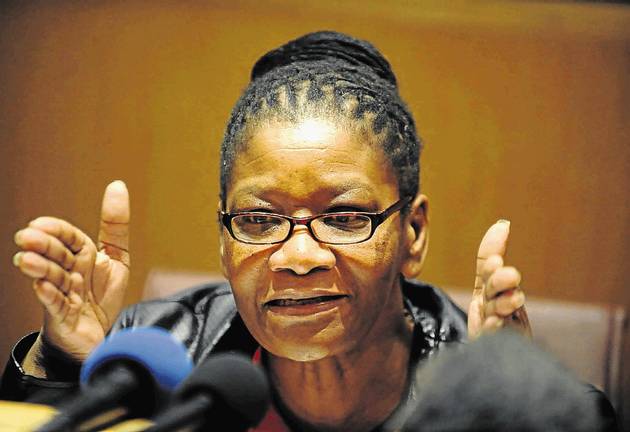 Defence minister Modise, her deputy Thabang Makwetla and minister in the presidency Gungubele were present at the meeting when it quickly turned sour.

Doors were barricaded and the trio not allowed to leave.

Speaking in a video message after being rescued, Gungubele said that the incident was “untenable” and “legally unacceptable”. He said the meeting broke down when consensus couldn't be reached, and it was said that a decision was taken to adjourn.

“As we were leaving the meeting, proceeding to the doors, they [the military veterans] closed the doors. It is at that point we realised we were held hostage. It is a situation which was averted by the security forces, very effectively and successfully,” he said, adding that he hoped the “law would take its course”.

Department of military veterans spokesperson Phumeza Dzuguda had earlier confirmed to TimesLIVE that there was an incident, but said she wasn't authorised to provide more details. Attempts to contact defence spokesperson Cornelius Monama were unsuccessful.

Speaking to media at the hotel, SAPS spokesperson Brig Vish Naidoo confirmed that police had “penetrated the room where the hostages were being held”, and that no shots were fired.

In a statement issued at 11.30pm, Naidoo said: “At approximately 7.15pm police received a report of a possible hostage situation in which two cabinet ministers and a deputy minister were allegedly taken hostage. After attempts to negotiate with the hostage takers to release the hostages had failed, police resorted to a tactical approach and successfully rescued the hostages. There were no shots fired during the rescue.”

He confirmed that 56 people were arrested and “they are likely to face charges of at least three counts of kidnapping”.

Three of the people arrested were taken for medical checks.

Speaking to the TV channel, MK military veteran Lwazi Mzobe said that the former soldiers wanted reparations, among other demands.

But he denied that the minister was being held hostage and claimed that they were allowed to leave and there was “no barricade”.

He said Modise, Makwetla and Gungubele were requested to “sit there with us” to facilitate a meeting with President Cyril Ramaphosa, whom they had hoped would have addressed them and their demands.

Cape Town is plagued by an inefficient, unreliable rail service that often leaves commuters stranded and affects the productivity of businesses
National
9 months ago

Employer body to hold briefing on Friday and says its latest offer is ‘fair, equitable and sustaniable’
National
9 months ago

Elections head labels possibility ‘not desirable’, but expressing the ‘will of the people’
Politics
9 months ago
Next Article